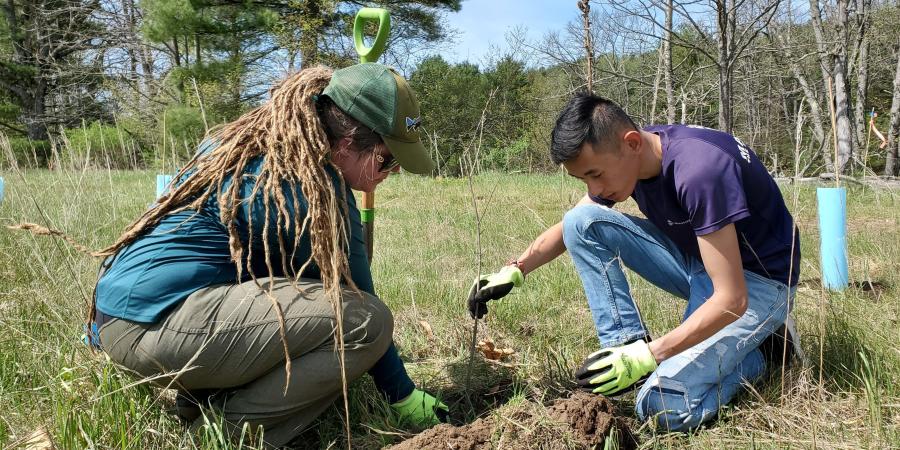 One of the biggest influences on the health of a stream or river is the vegetation on its banks. The strip of vegetation along a waterbody is called a riparian (meaning riverside) buffer. Buffers play numerous important roles for the river, wildlife, and human communities.

A healthy streamside buffer stabilizes banks, which minimizes erosion (and property loss) and sedimentation in the river. While these are natural processes, too much sedimentation can smother benthic habitats that are home to important species including macroinvertebrates, a primary food source for many fish species. This same buffer acts to shade the stream, helping to keep water temperatures cool enough for aquatic life. Without this important shade, water temperatures can become too hot during summer for species such as trout to survive. Terrestrial species benefit from riparian buffers too. Streamside vegetation provides critical habitat to many bird and wildlife species that rely on the river as a source of water and food.

The benefits to fish, birds, and wildlife may be more apparent, but the advantages of riparian buffers to human communities are just as great. The vegetation in a buffer filters water from rain and overland flow, keeping the water in our rivers clean and safe. This is important to aquatic life but also to people who use the river recreationally. Perhaps the most important way a riparian buffer affects riverside communities is in its ability to reduce flooding. A buffer does this by intercepting and storing rainwater and overland flow so it goes into groundwater rather than right into the stream. It will eventually end up in the stream, but the vegetation slows this process, so it enters the stream flow over time rather than all at once. While riparian buffers are vital to the health of streams and communities, they are often lacking in developed areas.

To address the cycle of accelerated bank erosion in the Ausable basin the Ausable River Association has been working since 2014 to apply natural stream restoration techniques to repair banks and create new aquatic habitat. To protect newly created restoration structures from erosion and re-establish important near-stream terrestrial habitats, it is critical that these projects are revegetated quickly.

At the Ausable River Association, we work to first seed these newly constructed or disturbed banks using our own native seed mixes that we have curated through plant inventories across the Ausable Watershed. From 2019 to 2022, AsRA staff have chosen 17 sites that experience disturbance similar to restored streambanks. At these sites, all vascular plants are identified, and their abundance is estimated. Based on the most abundant native plants and grasses in a variety of habitats, we were able to curate several different native seed mixes for the Ausable River watershed.

After seeding the banks, the next step in revegetating the banks is to plant trees. We utilize several different approaches when planting trees depending on the characteristics of each site. We primarily use either bareroot trees (pulled right from the ground at a nursery and transported without a container) and live stakes (sections of trees cut during dormancy that can be stuck right in the ground). For both methods, planting is followed by mulching around each tree and watering. To aid in sourcing native, local trees, AsRA has started a foundation nursery plot in Lake Placid. We hope to be able to use this nursery as a source of trees for future streambank restoration projects.

Our work doesn't end after planting the streambanks. We follow up by monitoring our restoration sites for success, looking at the growth of the plants and trees, their health, and for the introduction of invasive species. In some cases, sites require follow up plantings to replace plants/trees that have died or to further enhance the buffer. By monitoring the sites we have planted, we are able to learn which approaches work and those that don't so we can continue to improve our work in riparian restoration.

While much of the focus of our riparian restoration is on newly created banks following in stream restoration projects, we also work with landowners to improve their riparian buffers. Disturbance can look different across the watershed, but it includes anything that prevents the buffer from working effectively. There are natural disturbances such as flooding and ice scouring (luckily many native riparian species are well adapted to these), but many more manmade disturbances. These include cutting too many trees too close to the stream for either firewood or a view, mowing up to the river's edge (or just too close), building impervious structures within the buffer area, and channelized runoff entering the buffer. Disturbance often also leads to the introduction of invasives species that outcompete native species, are difficult and sometimes impossible to remove, and don't provide the important riparian habitat for wildlife and bird species or provide the benefits to the stream.

In 2022, the Lake Champlain Basin Program launched Stream Wise. This program was created to educate and incentivize communities across the Lake Champlain Basin to engage in riparian stewardship activities. The Ausable River Association was the host organization in the pilot year of the program. We worked with interested stream side landowners within the Ausable River Watershed to assess the stream side buffer on their property and give recommendations for ways to improve the management of their buffer. In our first year, we assessed 10 properties and 7 of those met the necessary criteria to be awarded a Stream Wise Award. We hope to continue to work with landowners to conserve and restore the riparian buffer across the Ausable River Watershed and beyond.

This project has been funded wholly or in part by the United States Environmental Protection Agency under assistance agreement (LC 00A00707-0) to NEIWPCC in partnership with the Lake Champlain Basin Program.