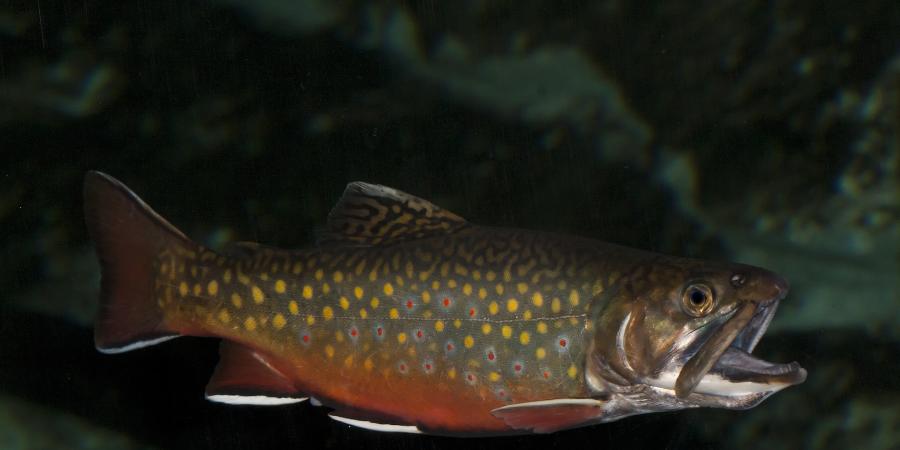 Results from a 15-year study of factors affecting population levels of Eastern brook trout in the face of climate change show that high summer air temperatures have a large influence, in particular on the smallest fry and eggs, which are most important to wild trout abundance in streams.

Co-author Ben Letcher, fisheries biologist at the U.S. Geological Survey and adjunct faculty in environmental conservation at the University of Massachusetts Amherst, says, "It took years of sampling four streams and tracking more than 15,000 individual fish, but we feel we can account for about 90 percent of the yearly variation in abundance. The bottom line is that high summer temperatures are bad. That is unfortunate because summer air temperature is expected to increase with climate change and extreme rain is also expected to increase, especially in the spring when vulnerable eggs are hatching and fry are emerging."

"Those two things are heading in the wrong direction for this particular species," he adds. Letcher and his colleagues predict that if climate warming proceeds as projected and the trout don't evolve, in as soon as 15 years these sentinel fish of cold water streams could be gone from the study stream. "If they can evolve, they may at least double their ability to stay in the stream," he notes.

Findings reported this week in the current issue of the Global Change Biology are expected to help nonprofit watershed conservation groups and state and federal wildlife managers identify, prioritize and protect habitat at sites most likely to have fish in the future.

To identify how climate influences fish abundance in streams, Letcher and colleagues at UMass Amherst, USGS, the USDA Forest Service and the University of Oxford, England, studied native brook trout in a small cold water main stream with three tributaries, perhaps "the most studied trout stream in the world" he says, about 1 kilometer long, in western Massachusetts.

Since 2000, they have sampled populations and tagged individual trout to understand the relationship between fish deaths, births, their movement into and out of the stream and factors such as air and water temperature, stream flow, rainfall and drought by season. Using small pieces of fin from thousands of individual fish, the researchers also are studying generations to see if they might evolve their way out of this problem.

Letcher explains that this group's recent paper represents step two of their quantitative model of this stream system. It puts fish growth, movement and survival data together with stream temperature and flow in each of the four streams in each of the four seasons per year.

"Climate works through rain and stream flow, and air temperature and stream temperature. Our challenge is to get from climate, to stream, to fish," he points out. "Put simply, the two main drivers are stream flow and temperature. If we can understand the link, then we can predict from climate back to fish. This paper boils all that down into one complicated but integrated model that takes all those things into account. The result is a forecast based on best available knowledge."

The data points are tight, he adds. "It's very hard to detect contemporary climate change effects, but we've done that. It took a study of this complexity to be able to uncover these very complicated relationships, but because we can account for a lot of the variability in the system, I have confidence in the results."

"If we were looking at just this study by itself I'd have less confidence in the conclusion. But we also have data from studies in other areas and they all point to the same general conclusions. Data from other states and other experiments fit our model and match the abundance decline we see with higher summer air temperatures and more extreme spring floods."

Letcher says there is much that can be done by wildlife managers, land trusts and conservation groups to help the Eastern brook trout in the future, including putting more shade-producing trees along river banks, adding logs into streams and making sure there are not too many wells removing cold spring water from the watershed. He is designing a web application to help such groups interpret and understand this study and others from the same research group.

The Ausable River Association has a variety of conservation programs designed to help our native brook trout adapt to and survive climate change. Many Ausable tributaries can serve as cold-water refugia for fish during the warmest months of the year. The issue is that fish are often blocked from accessing these areas due to undersized or perched culverts. These culverts also limit fish movement, thus limiting genetic diversity and reducing the chance that they may adapt to warmer temperatures. AsRA is working with the US Fish and Wildlife Service, local governments, and other non-profits to replace culverts in the watershed that block fish passage. Additionally, AsRA is working on river restoration projects that restore habitat, reduce sedimentation, and mitigate flooding. Finally, a network of temperature loggers and a long-term monitoring program help us understand changes in habitat suitability for brook trout and target restoration work.

The article has been modified and was originally published as a press release on the UMass Amherst website. Top Photo Credit: Larry Master