Climate change is causing a variety of impacts on lakes across the world. This article is the second installment of a series exploring how lakes worldwide have been altered by climate change and what that means for the lakes we each know and love.

Over the last several decades, a browning of lakes across northern Europe and northeastern North America has occurred. The browning is a result of increased concentrations of dissolved organic carbon (DOC). When you pour hot water over a bag of tea and let it seep, you increase DOC in your teacup. DOC is an essential component of aquatic ecosystems; it influences the physical, chemical, and biological properties of lakes. Rising DOC has been linked to slower growth rates of fish, increased occurrence of toxin-producing cyanobacteria blooms (HABs), alterations in nutrient availability, and increased pollutant transport.

One of the big questions aquatic ecologists have been looking to answer recently, is what is driving this notable change in our region’s lakes? Recovery from acid deposition is now recognized as the primary driver of lake browning in our area. Recovery of watershed soils from acidification increases DOC solubility and, therefore, its transport to lakes. In this case, we aren’t facing so much a browning of Adirondack lakes as a re-browning. The observed changes in color and clarity are, in large part, a return to a pre-industrial condition.

Changes in lake DOC have only recently been recognized as an important regional change. As a result, many long-term monitoring programs lack historical DOC data that would allow for a better understanding of how individual lakes are changing. Many citizen monitoring programs collect transparency data in the form of Secchi depth. The Secchi disc is one of the simplest and oldest limnological tools that can be used by just about anyone. Across the Adirondacks, we see a regional trend toward reduced transparency, a shift driven by increasing DOC.

What does this all have to do with climate change? In our previous post about the influence of floods and droughts on lakes, we briefly mentioned that precipitation (wetter) and temperature (warmer) might also play a role in lake browning. A warmer climate results in alterations in watershed vegetation cover, while also accelerating the breakdown of organic matter. A wetter climate increases the transport of organic matter to lakes. The analogy of the teacup works here as well, more tea, along with more and warmer water will result in a stronger cup of tea. 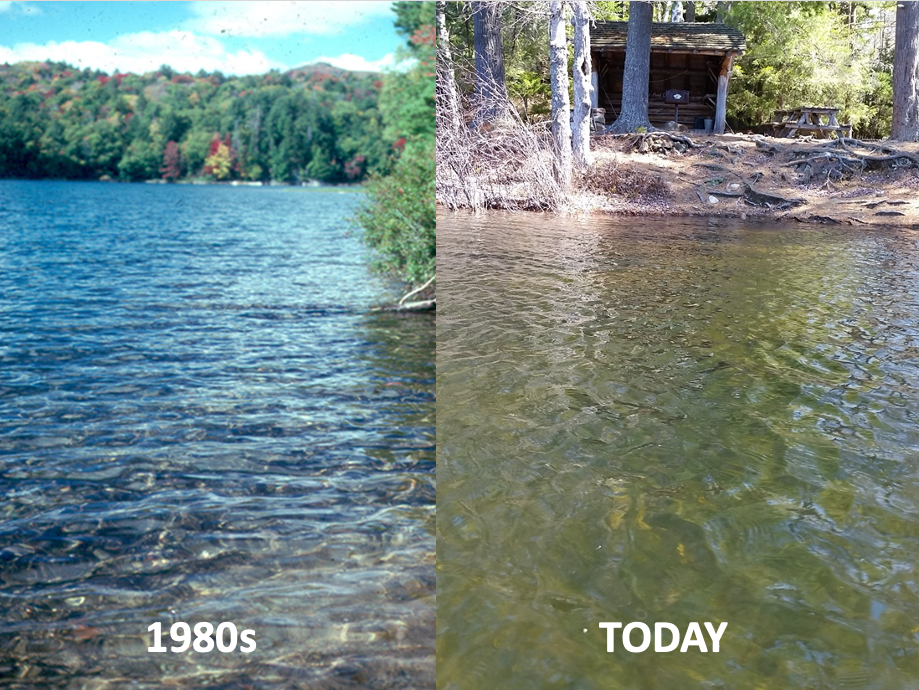 In the 1980s Bear Pond in the St. Regis Canoe Area had crystal clear water due to acidification. As the lake has recovered from acidification it has browned. Climate change has likely played a role as well and it is expected the lakes and ponds like Bear Pond will continue to brown as our climate continues to warm. (Credit: Curt Stager)

The challenge we face when understanding how lakes will change under a future climate that is warmer and wetter is to disentangle the multiple factors stressing our lakes. Separating the influence of acid deposition recovery from climate change on lake DOC is challenging. Researchers in Canada recently published work that begins to tease these two factors apart. They studied two groups of lakes in Ontario, one in the Sudbury region that was heavily acidified, and another group at the Experimental Lakes Area that was only influenced by long-range acid deposition. Both regions are becoming warmer and wetter with climate change. Their results help separate the influence of climate change and acid recovery on DOC changes in lakes. They found that climate change is the dominant factor influencing DOC changes in regions that experienced low acid-deposition. Still, recovery from acid deposition is the dominant factor in regions that had high acid-deposition. Most importantly, the co-occurrence of acid deposition recovery and climate change likely means that our lakes will become browner than they were in pre-industrial times.

In the coming years, we should expect to see continued declines in lake water transparency and increased browning of lakes in the Adirondacks. This is a change most lake users will not appreciate, and we are left with the conflicting realization that to a large extent, this is a matter of our lakes recovering to a more natural state. While at the same time, we know climate change will continue to influence our lakes, pushing them into a browner less transparent state than existed in pre-industrial times.