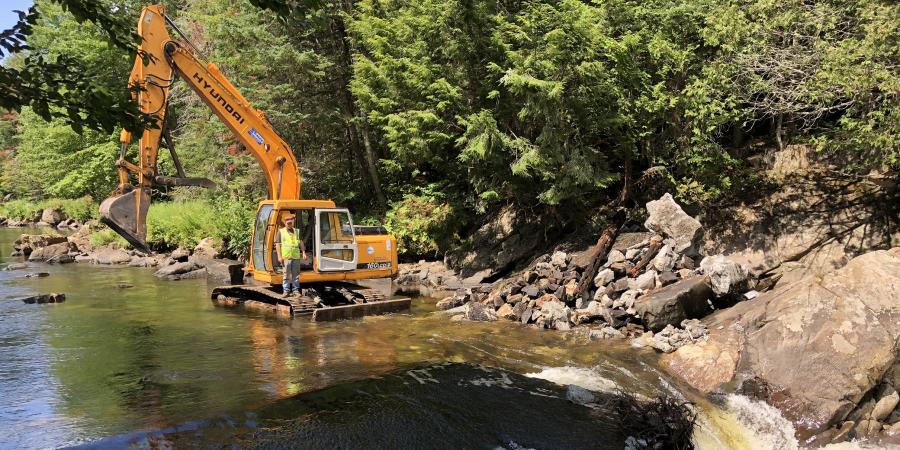 Work began at the beginning of August to remove the Rome Dam, built to power the J. & J. Rogers Company's pulp mill outside Au Sable Forks; it will continue well into the fall. (Read about that project here.) The same week, work began to remove what remains of a much smaller dam upstream on the West Branch of the Ausable River, between Lake Placid and Wilmington, which also traces back to the Rogers Company. In recent years it has been called the Quarry Dam, because it sits near an old quarry on Route 86, just east of the junction with River Road. Some have wondered if there was a connection between the quarry and the dam, but it seems improbable since they are actually quite far apart, and this does not appear to have been a dam designed to generate much power.

The dam sits on a parcel of land the Rogers Company sold to New York State—along with much of Whiteface Mountain—in 1926, having acquired it in 1899. The company, which controlled much of the Ausable River watershed a hundred years ago, also owned the Notch House, not far downstream, at the time. This was a supply station for local lumber camps and travelers from the late 19th through the early 20th centuries; it stood at the site of the stone tablets commemorating the creation of the Adirondack Forest Preserve at Monument Falls. The first of these two markers was erected by the Civilian Conservation Corps in 1935, at which time it seems from period newspaper accounts the Notch House buildings were gone. 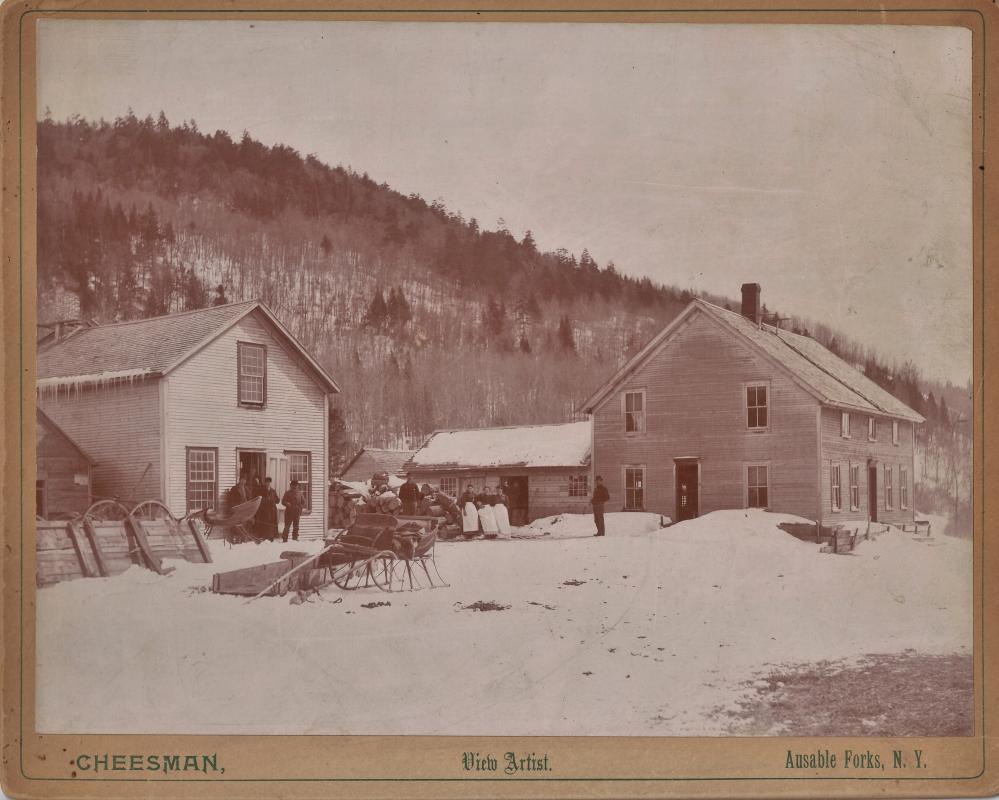 A survey of this stretch of the river and road, done for Verplanck Colvin between 1870 and 1899, shows only "rapids" where the Quarry Dam is located, but it shows the cluster of buildings at the Notch House site downstream. Evidently, the dam had not been built when this survey was made, indicating it was not there much before 1900. The only early image that has surfaced showing a dam in this location is a 1921/22 survey in the files of the State's Department of Environmental Conservation, showing the "dam site" beside "Calls Sawmill And Millyard." J. R. Call's house is shown nearby. One might conclude the dam was built to power his sawmill, which may well have drawn power from it. But the Rogers ownership and a 1942 newspaper story, as well as the sheer scale of the dam, suggest another possibility. 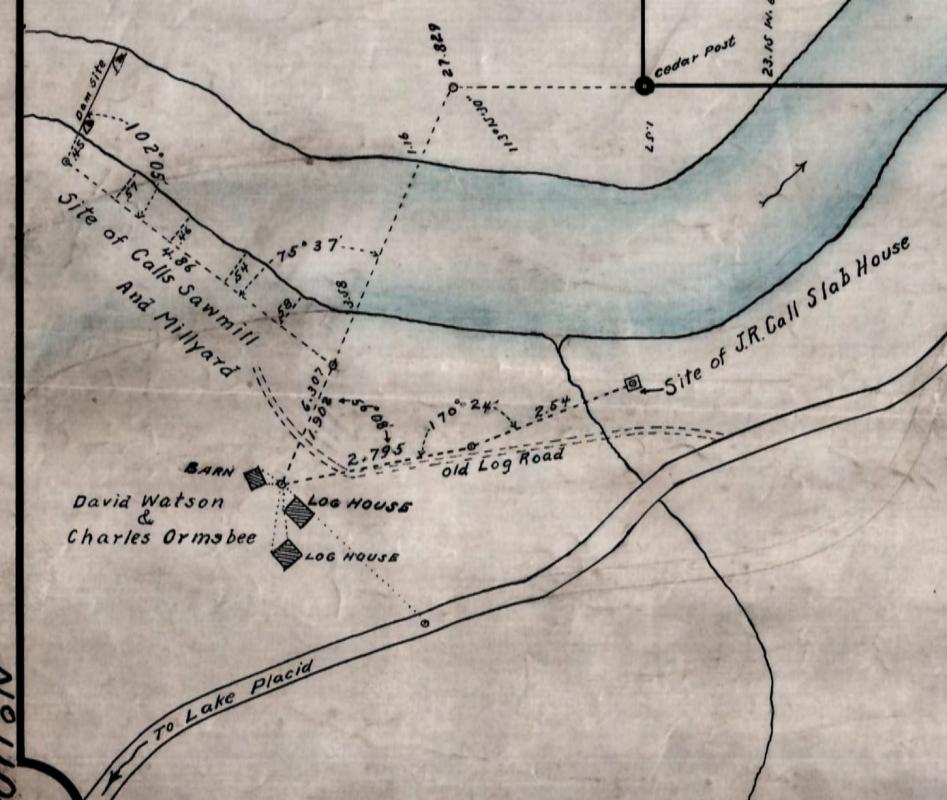 A story in the Lake Placid News of June 19, 1942, about a drowning in the river during high water, mentions the "Notch House dam" as a familiar local landmark. Other newspaper accounts of the period continue to mention the Notch House as if it were still there—when a prize buck is shot, or a car accident occurs, nearby—so it clearly remained a point of reference long after it had been replaced by a stone tablet. (Rural directions often work this way: you go up to where such-and-such used to be, then turn...) No other dam appears on any known survey near the Notch House—though there was a bridge over the river beside the house. If the Notch House had a dam, as part of its work supporting the local logging trade, the Quarry Dam must be it. 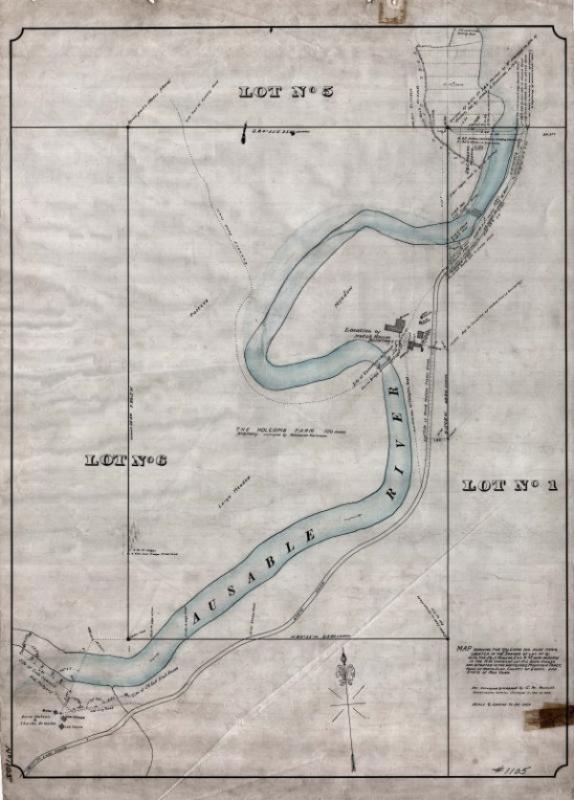 Another early newspaper account supports this reading of the historical record, which is not always as clear as one might like. This notice appeared in the Elizabethtown Post of April 12, 1894: "R. W. Joy, the well-known North Elba lumberman who has of late been conducting such extensive operations at the South Meadows, has let the job of running the spruce pulp wood down the west branch of the Ausable River as far as the Notch House, to A. Putnam, a resident of Saranac Lake."

Support our dam removal work that protects communities and connects habitat. Give with confidence today!

The Rogers Company had recently begun operating its pulp mill downstream, just above Au Sable Forks, when this notice was printed. It was the destination for the spring log drives that continued down both branches of the river until 1923. These happened in spring because logs were cut in winter, when they could be skidded over snow and ice to the river banks, until the spring flood raised water levels high enough to carry the quantities of four-foot spruce logs downstream. A series of flood dams on both branches of the river helped to control the process and minimize log jams, creating floods when needed, or exaggerating natural ones. Evidently, the Notch House was not only a landmark, but a crucial junction in the log drive--presumably because of its dam.

The Notch House dam was in all likelihood much larger than it appears today. It is the dam's foundations that are being removed: a series of concrete slabs, a few feet high and several feet wide, attached to bedrock and spanning the stream. The work is being done by Mike Ward, of Ward Logging, and has been organized by the Lake Champlain chapter of Trout Unlimited; AsRA is a partner in the project. A large stone wall, man-high, flanking the right bank as one looks downstream, will remain; it matches the height of a natural stone outcropping on the far bank. These wing walls, roughly 60 feet apart, once funneled water over the dam. 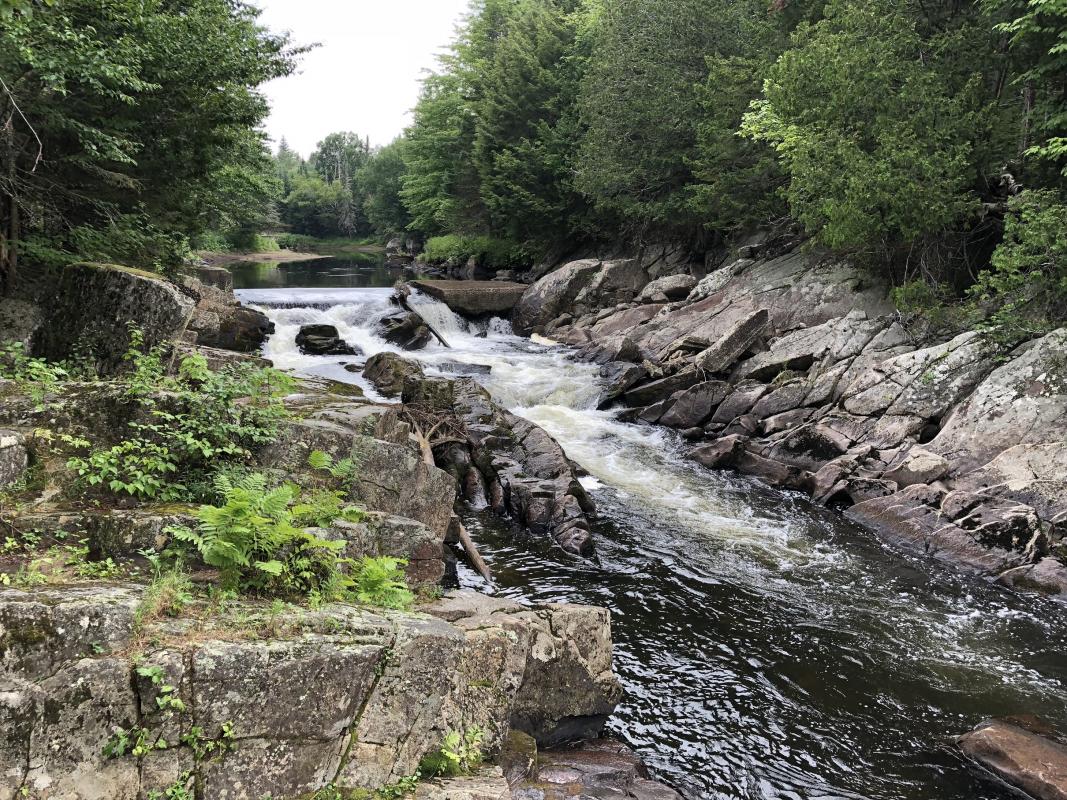 Several long timbers with foot-long iron spikes poked through them were pinned beneath boulders in the river or the edges of the concrete slabs, just upstream of the dam, before its removal began. These offer clues to its construction. With no period photographs to consult, it is hard to know just what it looked like, but it must have been built from such timbers, most of which have long since washed downstream. There must have been a gate or flash boards to allow the flow of water to be controlled. 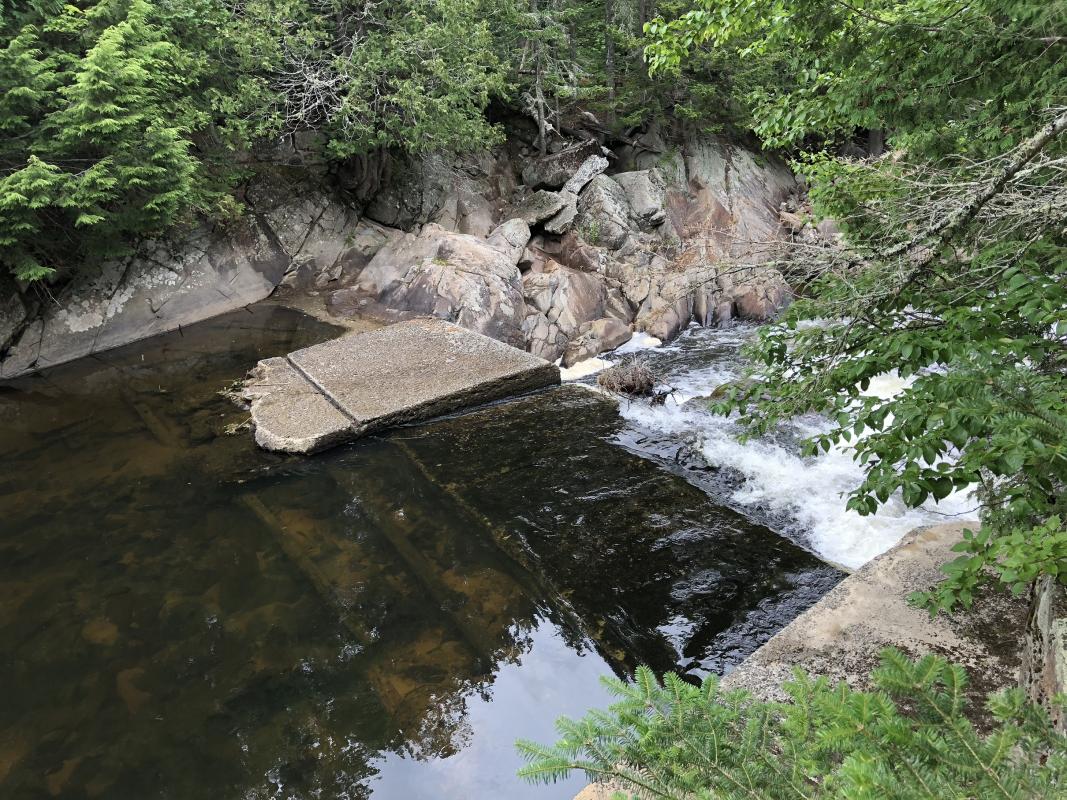 It is not entirely clear whether the dam was still intact when the surveyor visited in 1921 or '22. His field notes indicate two boulders in the river to which the dam "was attached," leaving some question whether it was already a thing of the past. It soon will be—though a handsome stone wall will remain, near a fishing hole where there may be better opportunities for fish to swim upstream, if they can get past the rapids, and where there certainly will be better sediment transport downstream. Flood dams only operated in spring, around the log drives; perhaps the surveyor's notes indicate the dam was open when he came, or perhaps it was rebuilt seasonally.

When it spanned this gorge, the impoundment must have been quite large—its size depending on the height of the dam. Jim Rogers, a long-time resident of Lake Placid who grew up in the midst of the Rogers family business, recalls seeing a photograph of vast piles of spruce pulp wood logs stacked on the peninsula formed by an oxbow just upstream of this site, not far downstream of the bridge  carrying Route 86 over the river. An impoundment, or dam pond, would have helped to float this wood when the river melted in spring, until the dam was opened and it went downstream. It's hard to say whether wood arrived at Call's sawmill on the river or the road, but if any of it came down the West Branch, the dam pond may have provided a place to sort the longer saw logs from the short pulp wood.

After this fall, the only dam left on the West Branch will be at Wilmington, holding back Lake Everest. Before its reconstruction in 1938, this too was the site of a J. & J. Rogers Company flood dam. The Wilmington dam is currently being repaired by the same firm that is removing the Rome dam, Reale Construction of Ticonderoga. In Wilmington, the firm is installing a new, larger gate that will allow sediment to move downstream in the off-season, when the lake is not used for recreation; this will improve the health of the river on both sides of the dam.

The Rogers Company shaped much of the landscape of the Ausable watershed in its day, and many artifacts of its logging activities remain, hidden in plain sight. Learning their stories while we can helps us to understand the management history of the river and the challenges it faces today.

Thanks to Michael Cantwell of the DEC's Bureau of Real Property, Region 5, and to Chelsea Merrihew, Title Searcher in the Essex County Clerk's office, for their help researching this story.

Written by Stephen Longmire. Stephen is a landscape photographer and historian who lives in Upper Jay. He is documenting the Rome Dam prior to its removal.