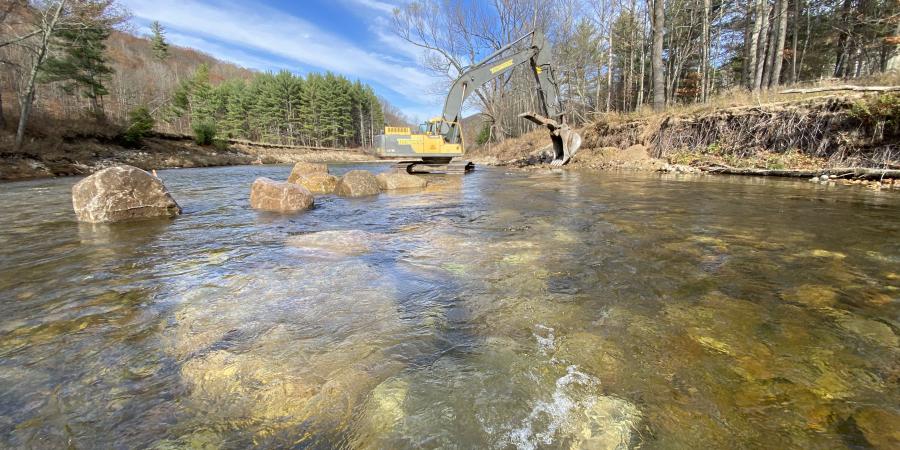 In late October and early November, the Ausable River Association and the US Fish and Wildlife Service built a natural stream restoration project on the East Branch Ausable River, just downstream of the hamlet of Keene. It was a late-season project in response to an emergency: the water main for the hamlet of Keene, which runs under the river, had been exposed along an eroding bank during the Halloween storm of 2019. The Town found the problem in the summer and in August turned to AsRA for help. Since the pipe carries 90% of the water supply to the hamlet and beyond, no one wanted to test whether it would freeze in the coming winter. 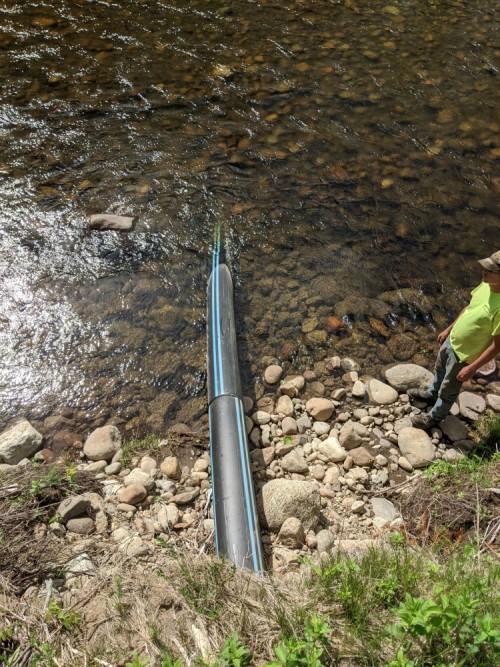 Before the bank eroded, the  12" diameter pipe was buried 6 feet into the bank. It runs under the East Branch Ausable River. This image is taken standing on the bank above. (Photo: Town of Keene.)

From late August to October, we surveyed and designed the project, obtained the necessary permits, and hired the contractors. There were two complementary goals. The Town's goal was to cover the pipe in place to reduce the likelihood of freezing in winter. Ours was to secure the pipe for the Town and do so in a way that supported self-sustaining stream function in this section of the East Branch. Traditionally, repairs like this focus on protecting the vulnerable area. Our approach focuses on why the damage occurred in the first place – going beyond the symptom to understanding and, if possible, address the primary cause.

Fortunately, AsRA staff know this section of the river well. Among other work, we completed an intensive study of bank erosion in 2016 – 2017 on the entire East Branch thanks to a grant from the Lake Champlain Basin Program. Specifically, we had photographs and data from this project area. We were able to quickly compare our notes from that work with the survey data we gathered in late September of 2020 working alongside staff from the Service. Those surveys took us well upstream, to the Route 73 bridge in the hamlet of Keene, in an effort to understand the context of the entire river reach and identify the primary cause of the erosion around the pipe.

An annotated Google Maps view of the project reach downstream of the Route 73 bridge in the hamlet of Keene. The 2020 work occurred in the circled red area.

What we found was a section of river destabilized by Tropical Storm Irene and, as a result, not capable of transporting the sediment that normally moves through it. Downstream of the Route 73 bridge, the river makes two deep turns before entering a straighter section where the water main is located. During Irene, the sheer amount of water moving through the system eroded the banks along the entire reach increasing the width/depth ratio – especially along and below the second bend. A wider channel with shallow flows cannot carry the same size material as a narrower deep channel with the same flow. An overwide channel such as in this reach results in cobble that once moved through the system, dropping out instead. Along and below the second bend, the resulting deposition and buildup of cobble and gravel has created a mid-channel bar that splits flows moving water toward vulnerable banks. This bar has increased significantly since our 2016 study. Further down, the roughly 400 feet immediately above and just below the water main – our project site, deposition has increased on the bank left (looking downstream) point bar. As a result, higher flows are forced to the right bank, elongating what was a small pool in 2016 and intensifying bank erosion all along this bank downstream to the exposed water main location. 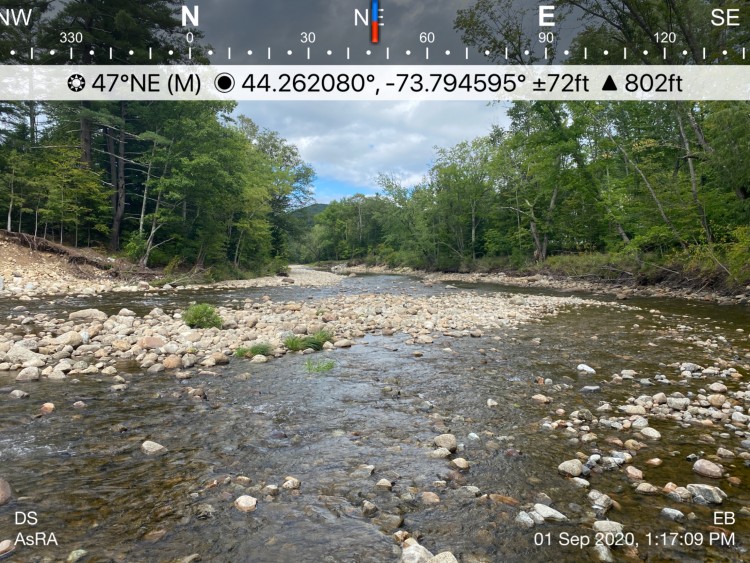 Looking downstream from the apex of the second bend at the aggrading central bar just above the project site. Further downstream, the bank left depositional bar is visible. The water main is barely visible downstream on bank right.

Many other factors play into the instability in the reach. For example, it is a low slope section of the river that follows the quite steep section along Hulls Fall Road, and the transition between these two sections is pinched slightly by the Route 73 bridge. Nevertheless, the reach has functioned effectively for many years prior to Irene and has access to two ample inner bend floodplains that help manage flows. Our assessment was that the reach has the potential to be self-sustaining even with the shifts in climate evident in our region. If there was no development in this section – no roads, homes, or water mains, we could let the river sort itself out and find its dynamic equilibrium over the decades. In doing so, it would continue to widen, increase sinuosity in some places, and straighten in others, eventually reclaiming a new channel with a newly formed floodplain – an impossibility given the human infrastructure on both banks.

We divided our work into two phases. Phase 1 secured the water main and restored the channel structure of the reach immediately around it. For Phase 2, we will return next summer to restore the pattern and profile of the upstream reach – through the two bends. The plan we executed in November 2020 included building two channel-spanning W-weirs, one just below the water main and one approximately 200' upstream. Between these, we used a variant of toe-wood called root-wrap to restore both banks. The W-weirs are carefully located along the reach and built to specific elevations to restore the former riffle-pool structure. They focus the deepest part of the channel in the center of the reach. The root-wrap is set at an elevation that narrows the channels, helps to slow higher flows, provides habitat, and protect the existing banks. Altogether, this strategy improves sediment transport capacity – our main objective for restoring self-sustaining function in this reach.

We’re looking forward to updating you next year after we tackle Phase 2 of the project. 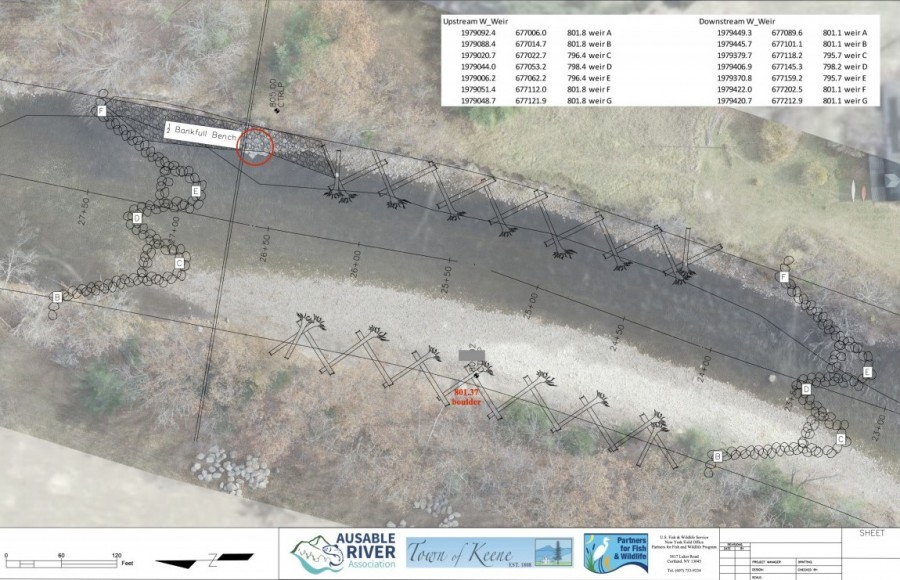 Above: Phase 1 project design for November 2020 construction laid over drone imagery by Brendan Wiltse. The river runs from right to left in this image. Water main cuts across at red circle.

Below:  Before and after images of the reach (river running left to right); water main in circle. Phase 2 work will dovetail with the upstream (left) W-weir. Drone images: Eric Adsit. 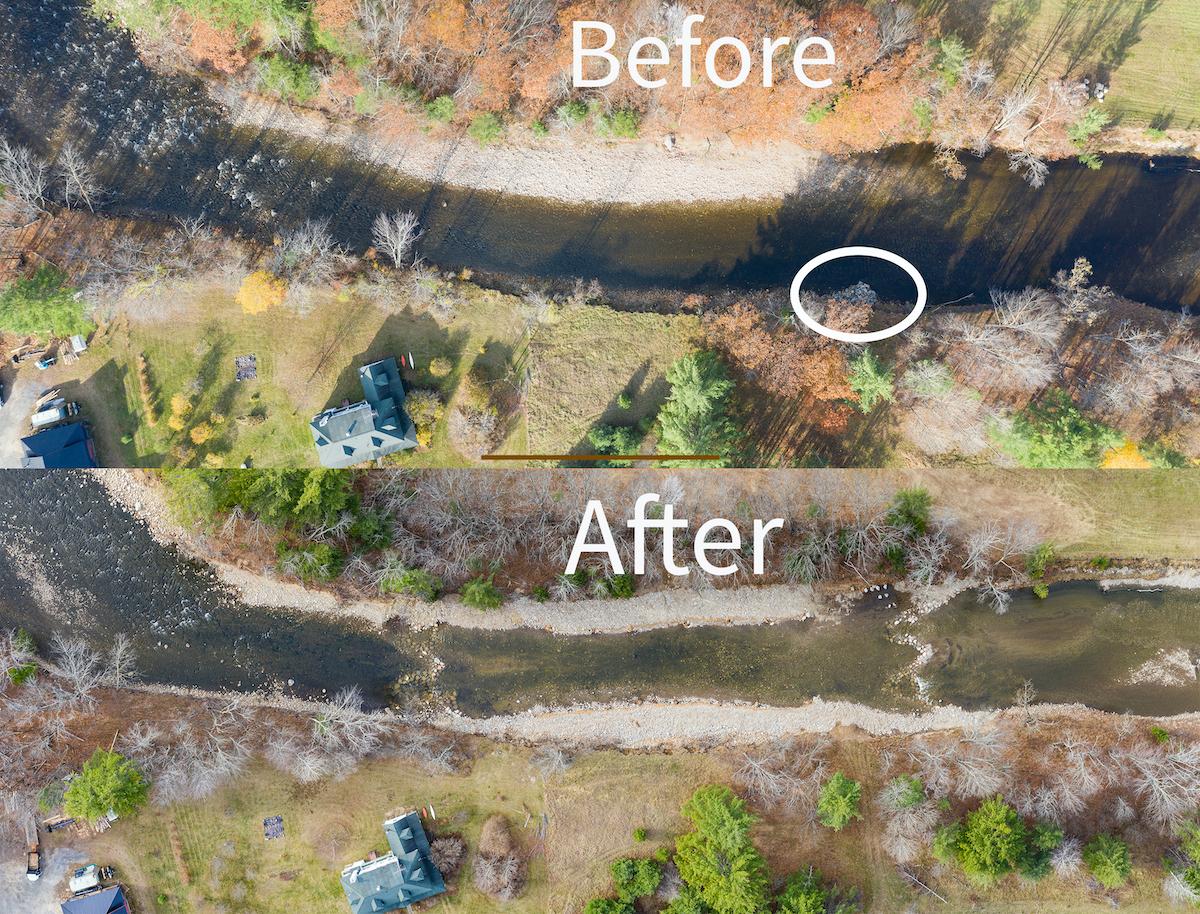 Story written by Kelley Tucker, Executive Director. Sign-up for our e-newsletter to get weekly updates on the latest stories from the Ausable River Association. 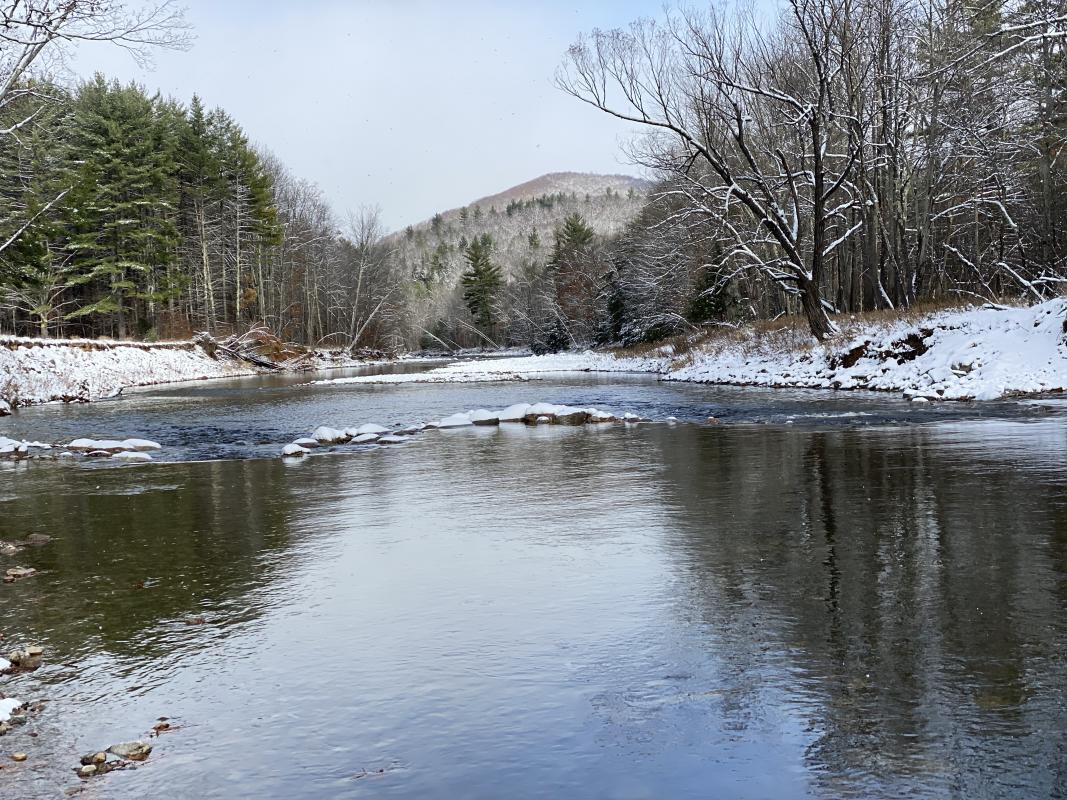 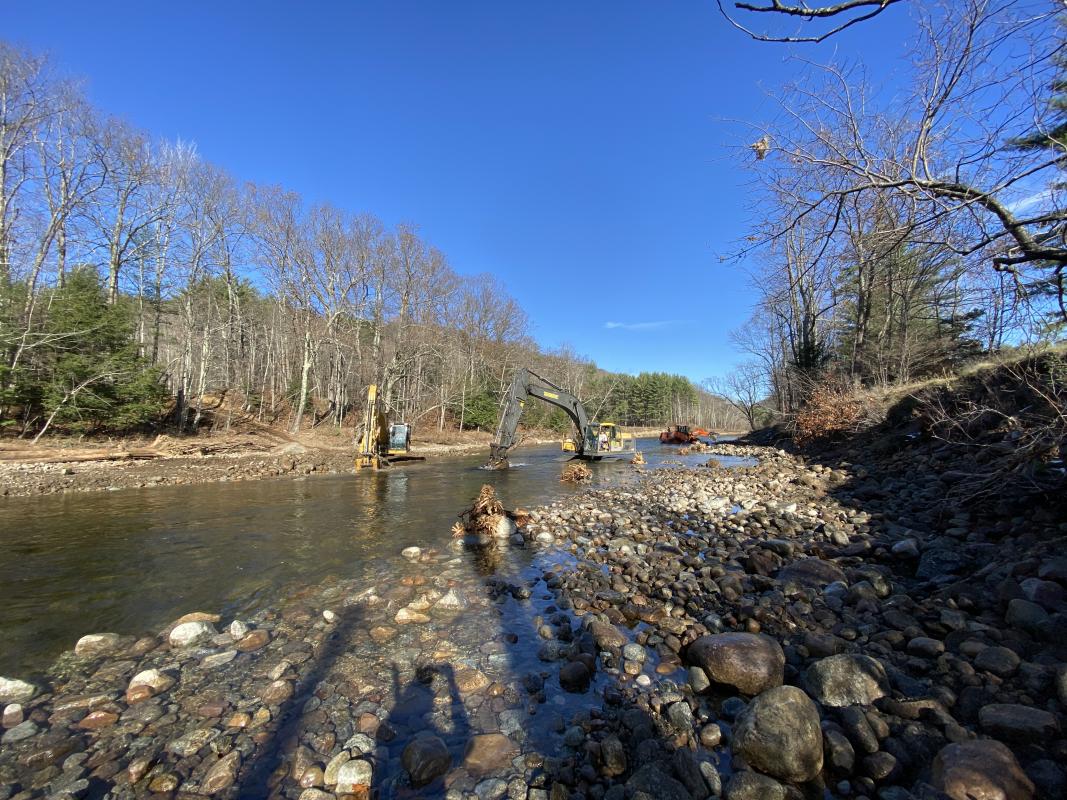 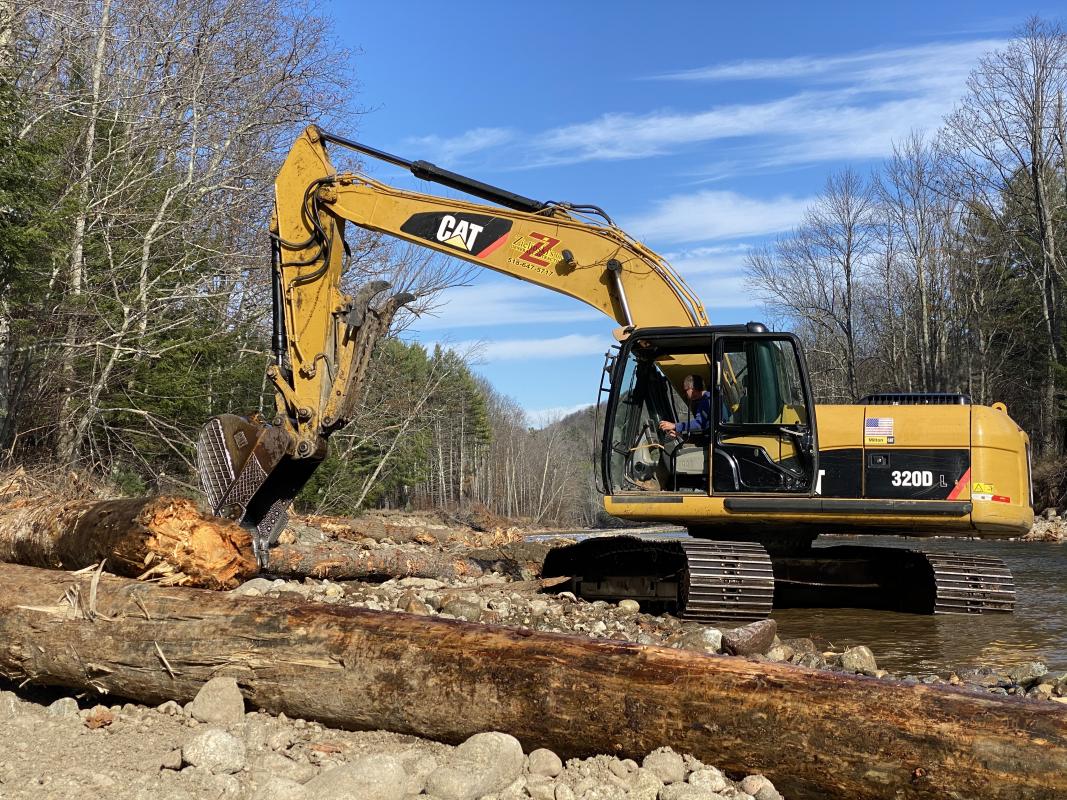 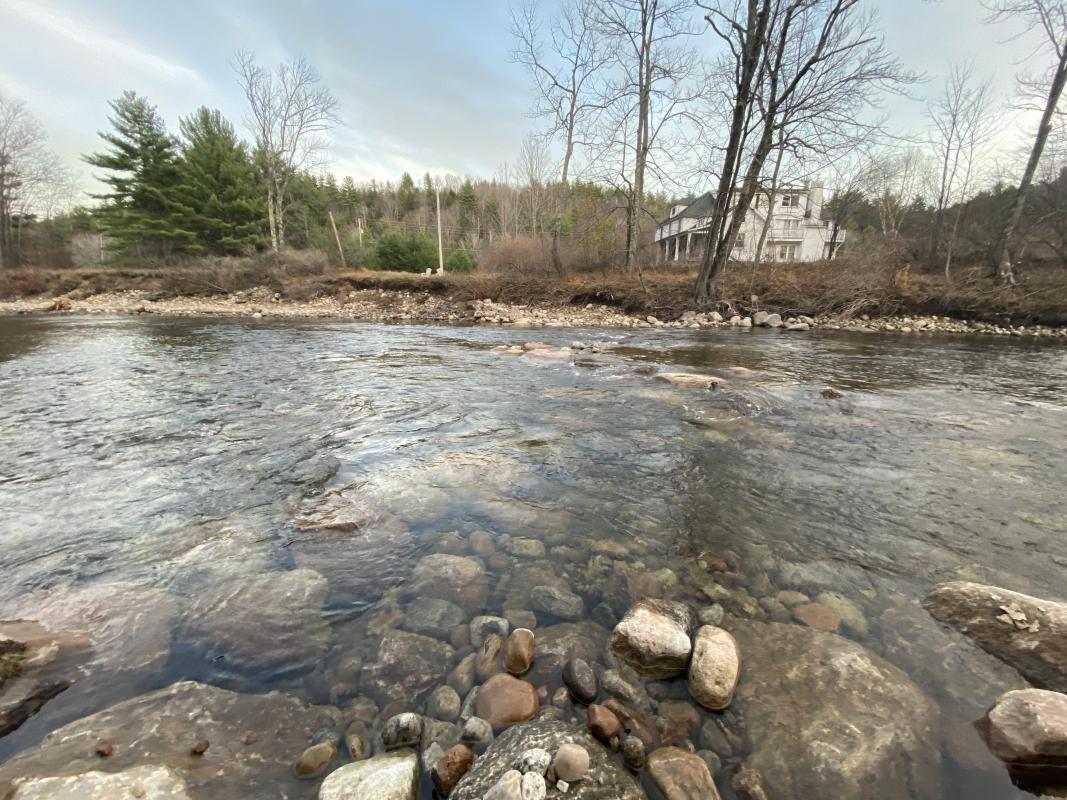 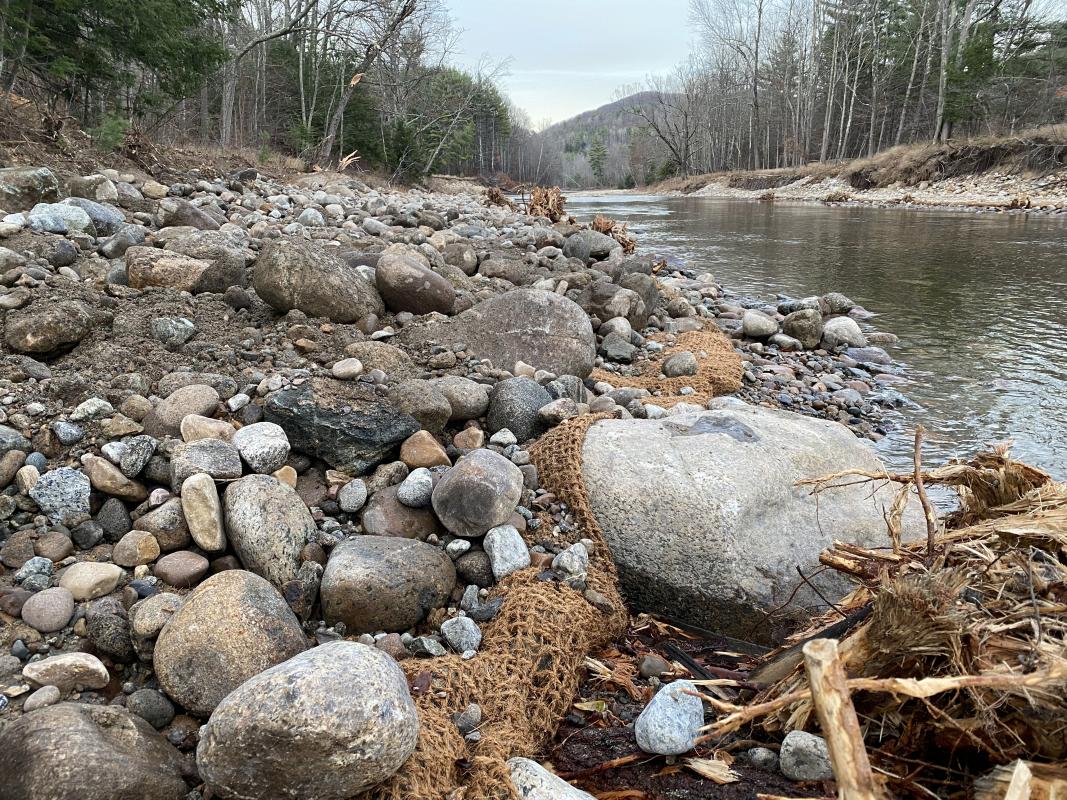 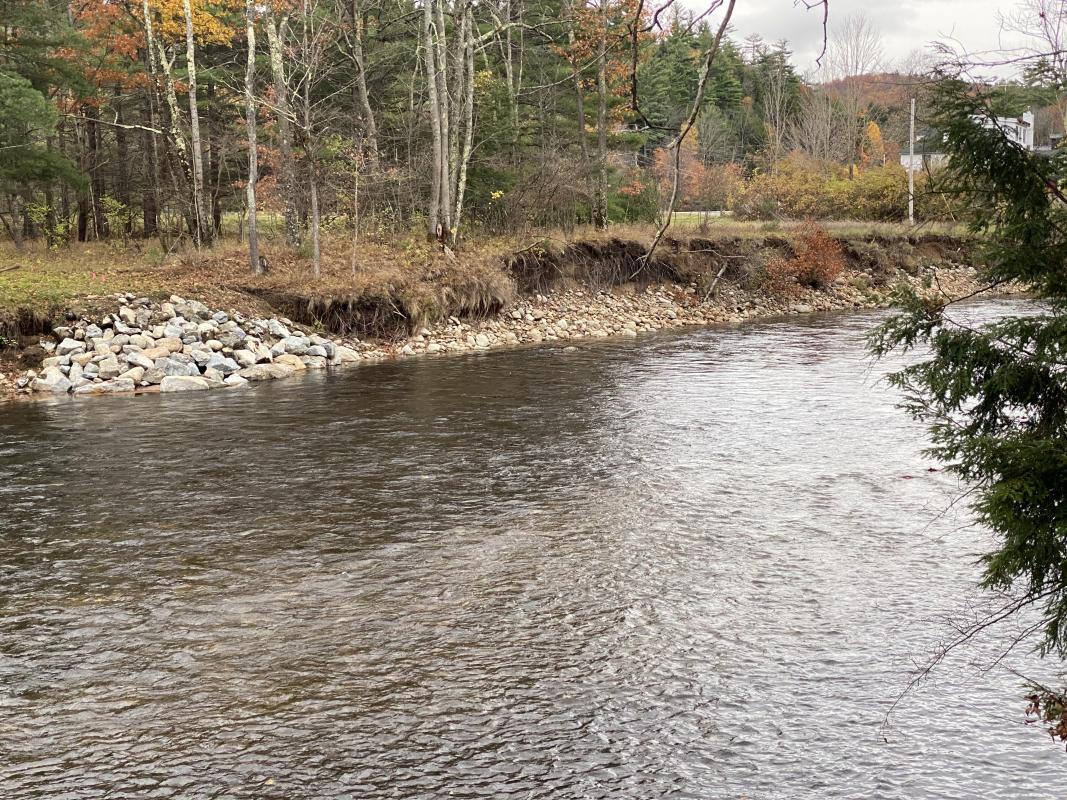 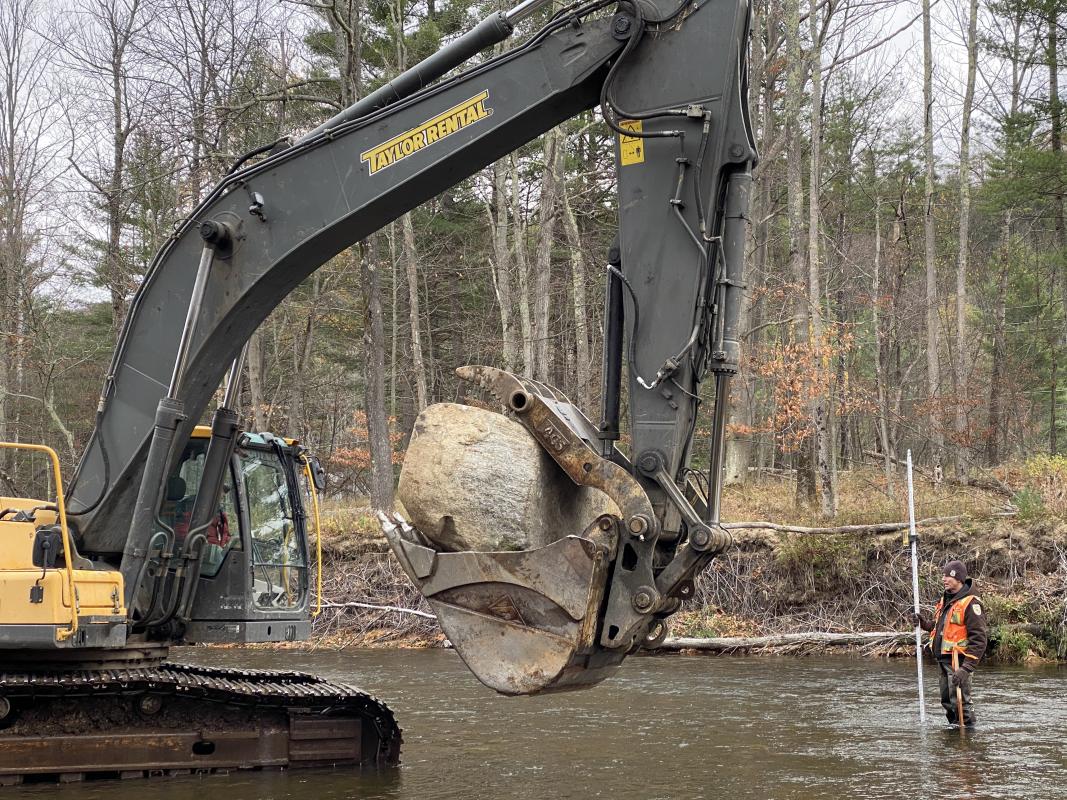 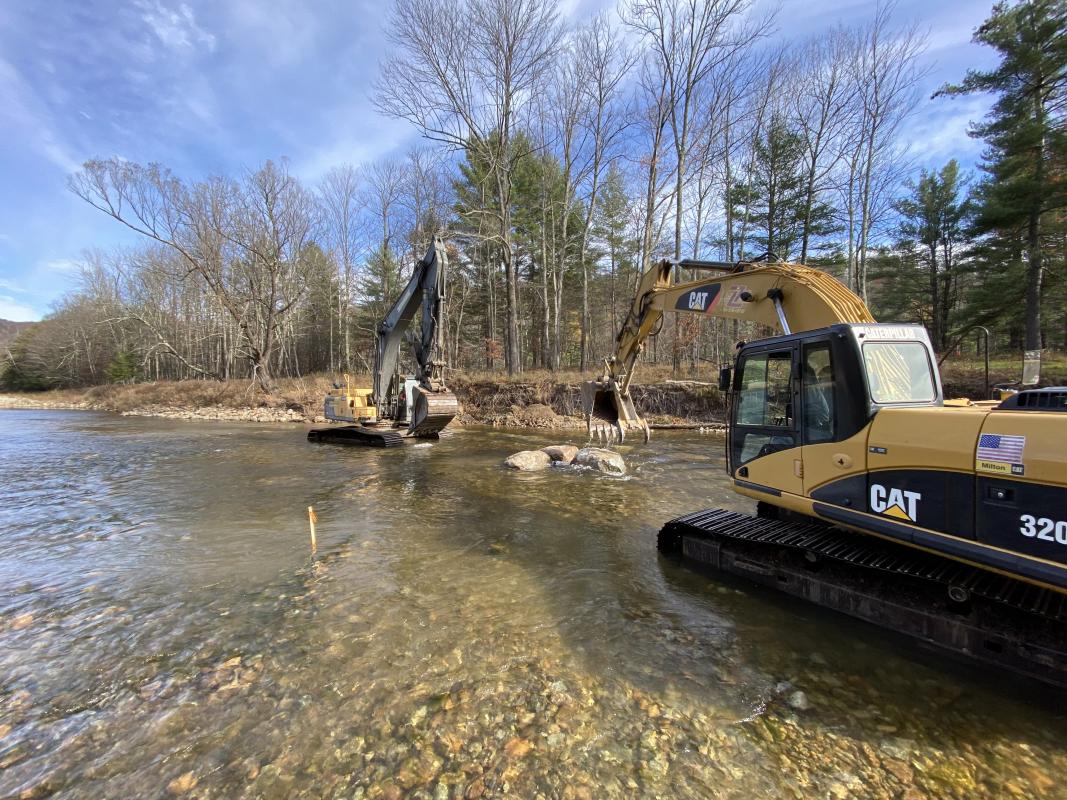