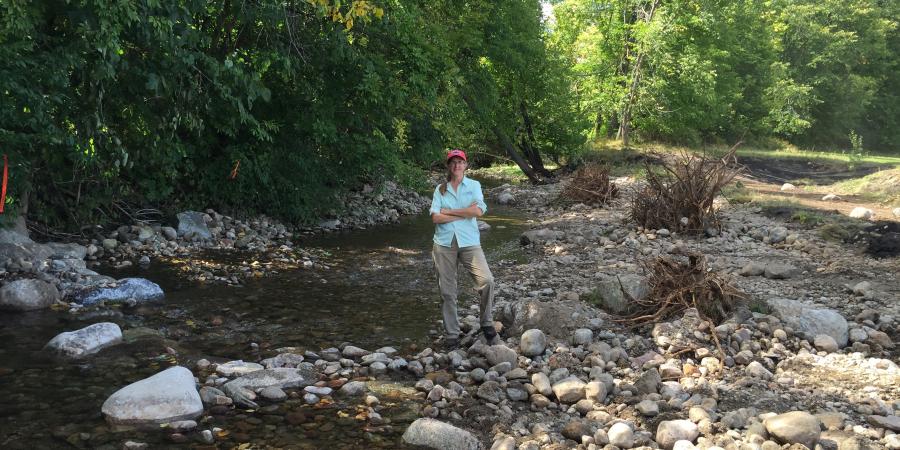 Tropical Storm Irene was damaging to many Ausable watershed communities and to many sections of the river. Ausable tributaries were high on the list of most devastated and were, in too many cases, the vehicle for devastation in our communities. The storm highlighted the fact that a scenic, relatively protected stream system can nevertheless be degraded enough to fail in larger storms. More often that not, failures occur where man-made structures, such as roads and bridges, constrict the flow of water or where long-abandoned industrial practices - for example, mining stream beds, blasting boulders, or empounding flows - leave degraded streambanks, altered channel slopes, or straighten the gentle bends of a stream.

Rocky Branch is a tributary of the Ausable's East Branch. It descends from several sources along the western slopes of Hog Back, Death, and Bluff Mountains and from the northern slope of Jay Mountain. It is a tributary rich in native brook trout though, in recent years, introduced brown trout are increasing in numbers. For the most part, Rocky Branch has recovered from many of the 19th century industrial uses - heavy timbering, brick making - that altered its pattern and flow. But roads crisscross it and, as it runs to meet the Ausable's East Branch, what 200 to 300 years ago used to be a fan of water - a delta much like at the mouth of the Mississippi but at a much smaller scale - is now a single ribbon of flow that passes under a bridge just above our project site. Irene, however, forced Ausable streams to use long-abandoned channels. In the case of Rocky Branch, this may explain why the worst damage occured in the bottom mile of the stream.

The Town of Jay and local landowners approached AsRA and asked our help in stabilizing damage and restoring balanced water flows. This summer our first project focused on the lower portion of the stream - 200 feet from its confluence with the East Branch. Here, the storm's flow attempted to carve a new channel. The image below shows the project area in July 2016 before work. The stream is forced to the left of its established channel. Deposition from Irene and subsequent storms had aggraded, creating a bar in the middle of the old channel. In addition, near the right bank an alternate channel is forming - a remnant of the old delta. 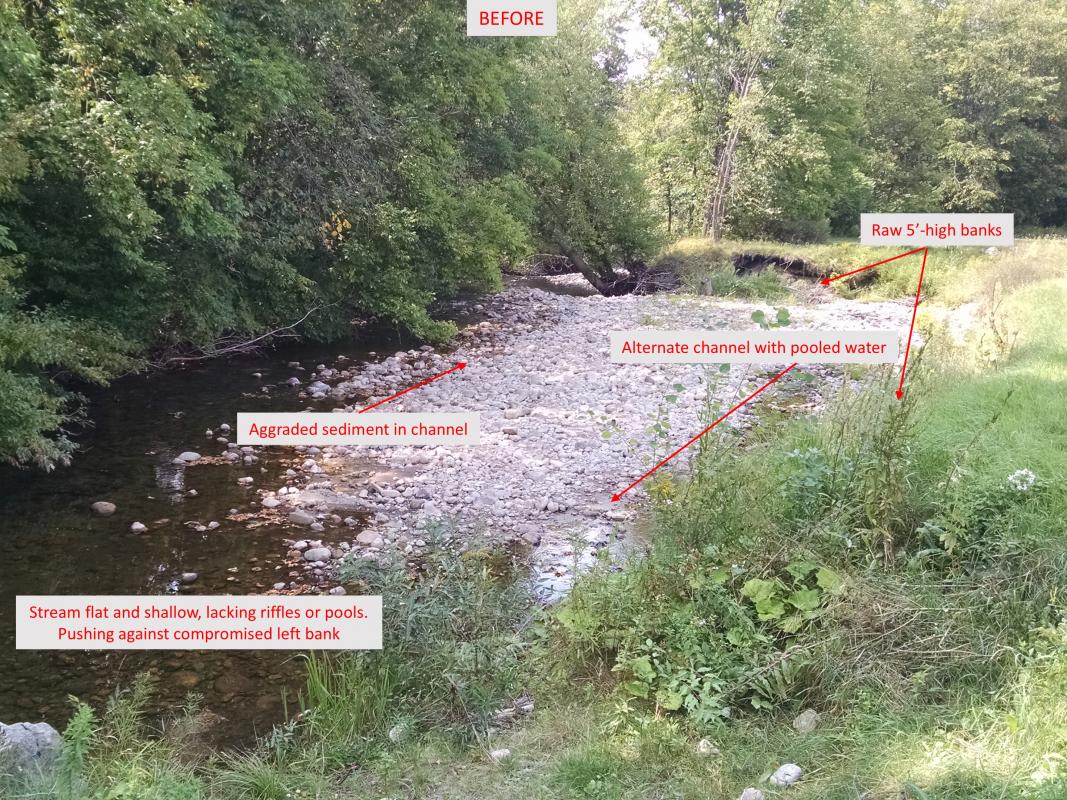 Flood flows best illustrate the problem. Below, a minor flood associated with the 2016 spring thaw, shows the channel split. Even at a high flow, the water is shallow. The current cannot move sediment very far, so it deposits mid-channel - the bar at the center of the water aggrades and stream flows are pushed further to the banks. The result is collapsing banks that make the channel wider and flatter, causing additional material to aggrade, more bank collapse, and warming waters that reduce brook trout populations. In larger flood events, property owners on both banks can expect to lose trees and land.

AsRA and our partners - Trout Unlimited, US Fish and Wildlife Service, New York State Department of State, and the Town of Jay - designed and received APA and NYS DEC permit approvals for a repair that restored a single channel while respecting the historical delta. Working with a local excavator operator, Mike Ward of Ward Logging, we directed the regrading of the channel to the appropriate slope and the installation of rock formations that would restore the riffles and pools essential to channel balance. Then, using 20 foot trunks with rootwads from a multi-trunked basswood taken from the property, we stabilized the right bank at a slope and angle that would allow the stream to repair itself over time.  Water that flows onto the right berm, just below the bank where the root wads are sticking up, will meet just enough resistance (gradual slope and rughness from cobble, boulder and root wads) to slow its velocity and cause it to roll back into the main channel. The root wads will capture woody debris and sediment rebuilding the materials needed to maintaing the berm. The rest of the tree was used to reinforce the bank just above the deep pool, essential for trout, near the end of the reach. In a large flood, 100 year or greater, water will move to the first  and maybe the second (higher) terrace on the right but will be moving slowly - unable to erode banks. In a year or two, native trees and plants we introduce will carpet both terraces, absorbing flood flows, further slowing them, shading the waterway, and providing habitat for birds, bugs and other wildlife. 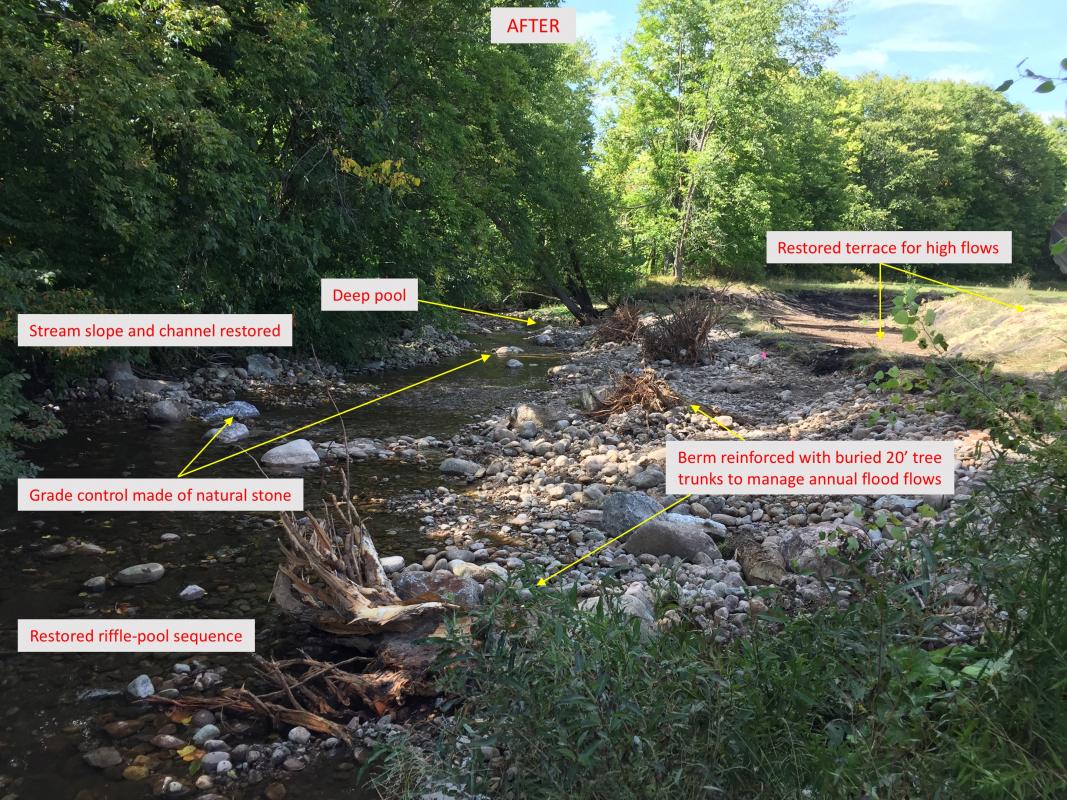 It is a small but significant project. A simple repair that took a great deal of planning, surveying, and design, but was implemented in just three days. We hope it is only the beginning of carefully planned and prioritized work on the East Branch and its tributaries.