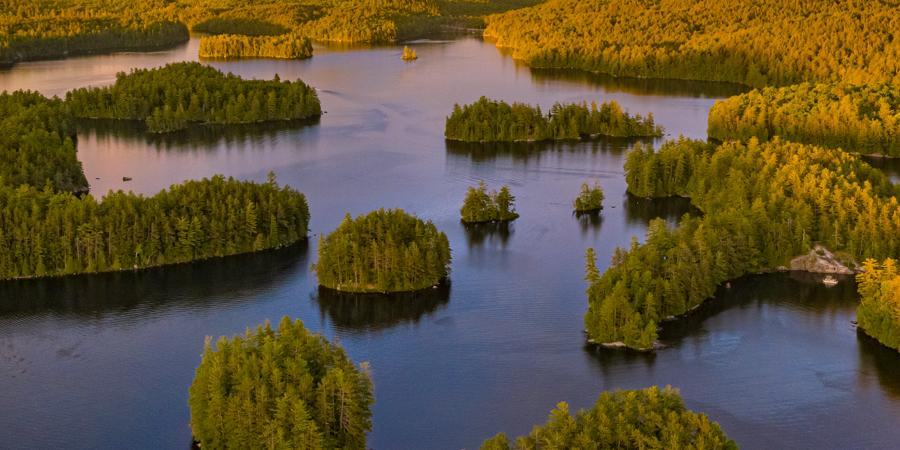 Impact of Climate Change on Lakes: Floods and Droughts

Climate change is causing a variety of impacts on lakes across the world. This article is the second installment of a series exploring the ways lakes worldwide are altered by climate change and what that means for the lakes we each know and love.

When thinking of climate change, the first thing that often comes to mind is changes in temperature, particularly warming. Another major component of a changing climate is alterations in the timing and amount of precipitation. Changes in precipitation can have dramatic effects on lake ecosystems.

Precipitation changes are much more challenging to model or predict than temperature changes. If you look at a map of temperatures across your region for any given day, they will typically be very similar, varying by only a few degrees. On the other hand, a passing storm may dump an inch of rain in one town while another nearby remains sunny. For lakes, it's not only the total amount of precipitation that matters, it’s the intensity as well.

Over the past several decades, the Adirondacks have been getting warmer and wetter on average, and there has been an increased frequency of large storm events. Some climate models predict an increased frequency of droughts in the area, but the climate data does not show that to be happening, at least not yet. However, it is important to note that it is possible to see an increase mean annual precipitation while drought frequency and severity also increase. Extreme rainfall events interspersed with periods of drought can produce this result. 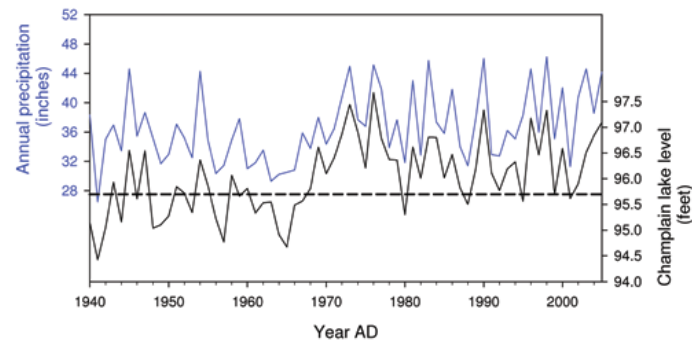 Total annual precipitation averaged from eight USHCN stations in the watershed vs. mean level of Lake Champlain since 1940. Note the prominent jump to higher precipitation and lake levels ca. 1970. The close similarity between these two records shows that precipitation is the dominant source of inter-annual variation in the level of the lake. The dotted line represents the average annual rainfall for the entire 20th century. Source: Stager and Thill. 2010. Climate Change in the Champlain Basin.

The most apparent impact of changing precipitation patterns on lakes are alterations in water level. We have seen long-term increases in the level of Lake Champlain that correspond with precipitation changes. Extreme precipitation events can also lead to extreme lake levels. Record flooding occurred on Lake Champlain in the spring of 2011 after a large rain event accelerated spring snowmelt.

Heavy rainfall events can also increase runoff, leading to accelerated erosion and an increase of nutrients and other pollutants flushing into lakes. The subsequent spike in nutrients sometimes leads to algae blooms. Alternatively, warm, dry periods can reduce flushing rates in lakes, and shift the balance of critical nutrients, again leading to algae blooms.

Large sediment plume in Lake Champlain following historic rainfall and snowmelt during the spring of 2011. Image courtesy of the Lake Champlain Basin Program.

The recent browning of lakes across eastern North America is caused in part by increases in precipitation. Lake browning is mostly the result of recovery from acid rain but increases in precipitation also play a role. Warm, wet conditions accelerate the decomposition and leaching of organic matter into lakes. You can think of this as similar to steeping a cup of tea; warm water makes stronger tea.

What does all of this mean for lakes here in the Adirondacks? We should expect lake levels to go up, flooding frequency to increase, an increased incidence of algae blooms, and a gradual browning of many of our lakes. These are all changes that are less than desirable to most of us. We can mitigate some of these effects by focusing on good watershed stewardship. Healthy riparian buffers, watershed friendly lawn practices, climate ready culverts, and septic maintenance will help make our lakes more resilient in a warmer and wetter future.

Caring for the Ausable
A practical guide for making a difference at home and at work.