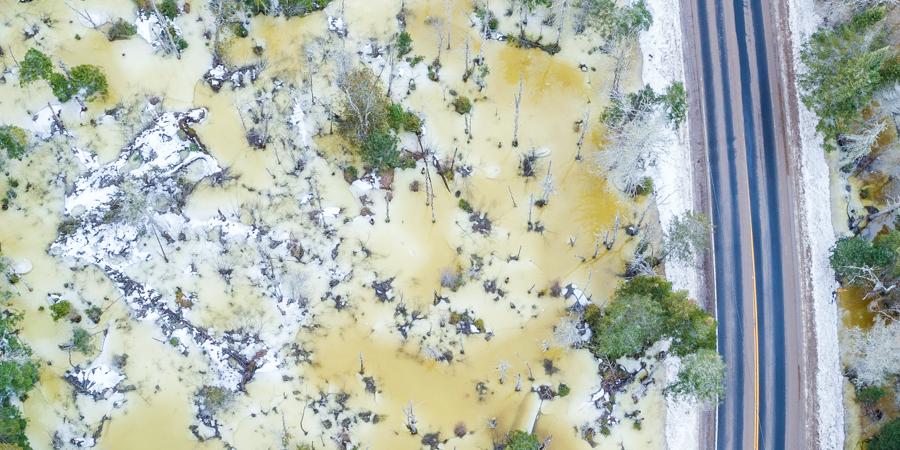 More is running off our roads than just the salt applied during winter. Road materials, paint and chemicals applied to roads, oil and grease from vehicles, heavy metals from deteriorated vehicle parts, and rubber from worn tires – all run off roads into the adjacent environment. This makes roads a significant nonpoint source of pollution.

Heavy metals are toxic to organisms at high concentrations. The most common metals to find adjacent to roadways are aluminum, boron, cadmium, copper, iron, lead, manganese, mercury, nickel, titanium, and zinc. Concentrations are typically highest within 30 feet of the road and top 6 inches of soil.

Streams in close proximity to roads are particularly susceptible to heavy metal contamination. Unfortunately for the Ausable River, long stretches of both the East and West Branches are adjacent to state roads. The runoff directly entering Mirror Lake also presents a concern. Heavy metals from roads can impact the macroinvertebrates living in streams, alter the structure of aquatic food-webs, and reduce stream organism biomass. Unfortunately, we know little about the effects of heavy metals on the Ausable River. Such research is costly, time-consuming, and difficult to fund. 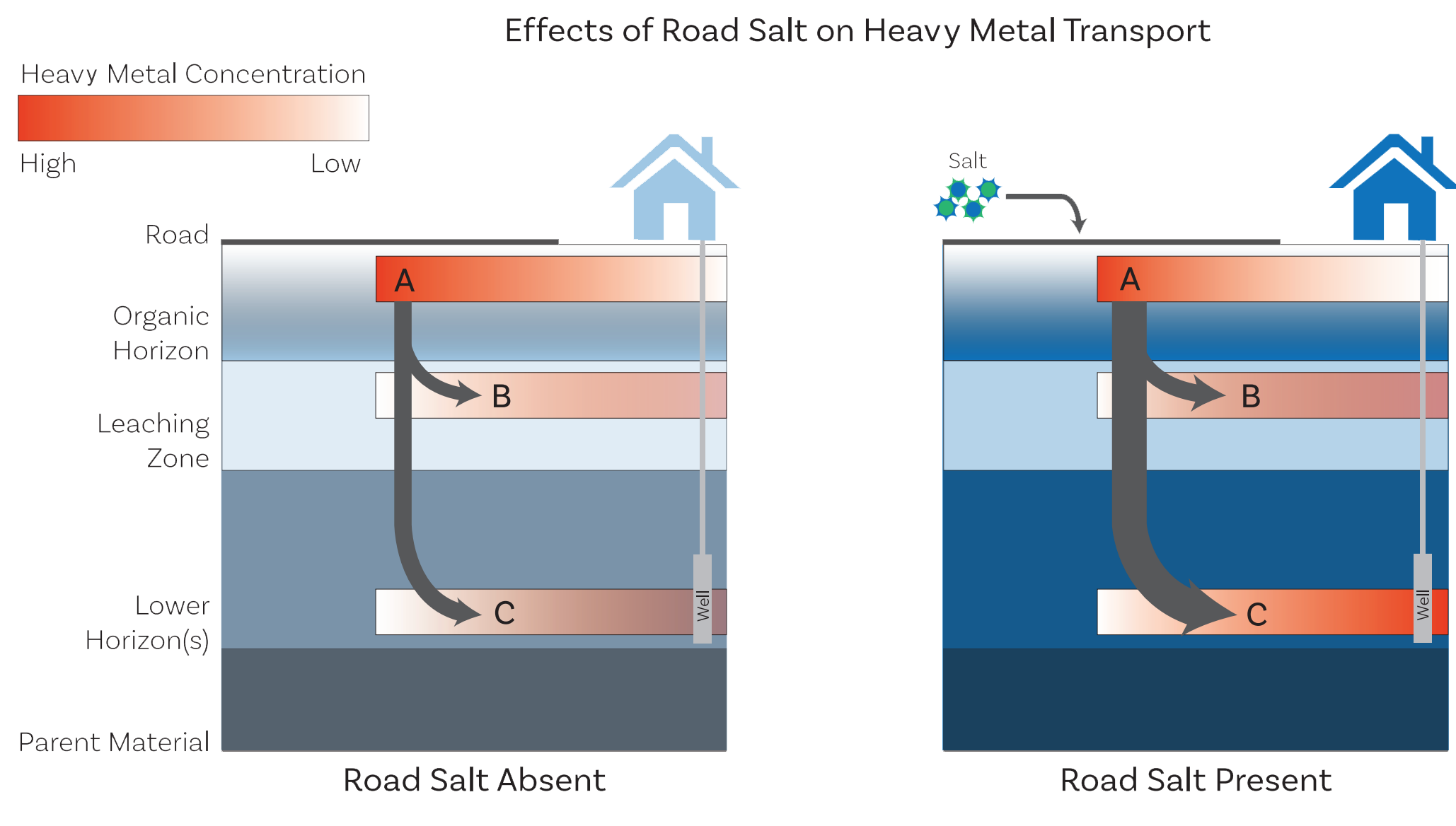 A depiction of the effects of road salt on heavy metal transport in soil along roads near homes or agriculture. (a) Heavy metals accumulate along a gradient (red and white gradient bar), decreasing with distance from roads. The addition of road salt leads to fewer heavy metals being present in the organic layer at the surface because of rapid downward movement through the soil, indicated by the heavier arrows. (b) Heavy metals become disassociated from organic materials in the upper horizons, moving into leachate zones where they might enter freshwater systems (e.g., streams, lakes, and wetlands). (c) The presence of road salt might also increase the rate of movement across the leachate zones into groundwater. Collectively, these processes move heavy metals down into groundwater and slowly move horizontally, where they can enter wells and aquifers used for human consumption and agriculture. Figure is taken from Schuler & Relyea, 2018.

Road salt plays an important role in the fate of heavy metals in roadside soils and freshwater ecosystems. Typically, heavy metals bind to organic material in the soils adjacent to roads. This is why the highest concentrations are often found in close proximity to the road and near the surface. Through several mechanisms, road salt can release heavy metals from roadside soils allowing them to move greater distances away from the road and deeper into adjacent soils. Additionally, the salt can transform heavy metals into more bioavailable forms, increasing toxicity to organisms that are exposed. From a human health perspective, this also means that heavy metals are more likely to be transported away from roads and impact groundwater that may serve as a drinking water source for a household.

As we noted in a previous article, an increasing body of evidence is revealing the extent to which road salt is contaminating groundwater supplies, rendering some private wells unsafe to drink. These studies have also documented elevated concentrations of lead in wells affected by road salt contamination. The source of this lead is thought to be primarily from corrosion of plumbing and fixtures in the affected houses, but the research discussed above also points to the mobilization of these toxic heavy metals from nonpoint sources. This further elevates the need to better understand the human health and ecotoxicological effects of road salt and heavy metals.

To read a complete technical review of heavy metals and road salt, we suggest "A review of the combined threats of road salt and heavy metals to freshwater systems," by Matthew Schuler and Rick Relyea published in BioScience.