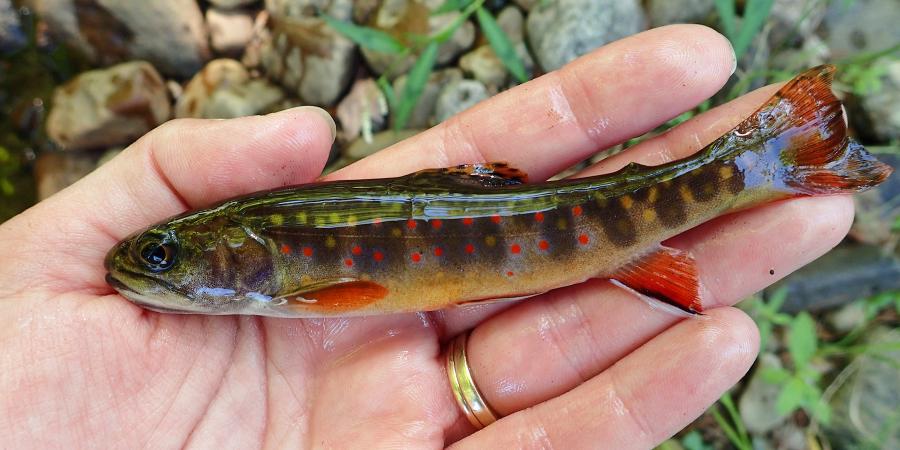 In Search of the Cold-Loving Trout

Brook trout are named Salvelinus fontinalis, meaning the little salmon of the mountain spring. The Latin translation seems especially apt for our native Ausable River watershed brookies. Perhaps more than any other fish in the eastern U.S., native wild brook trout capture the essence of a healthy freshwater stream. The question is, will wild heritage strains continue to flourish in Ausable tributaries into the future?

The Ausable watershed is home to three species of trout that are actively fished by anglers. These include brown trout, rainbow trout, and brook trout. The first two are not native to New York State, and were introduced by fishery managers in the 1890s. Both have been stocked here ever since, and are prized by anglers for their aggressiveness and for the trophy sizes that they can grow to after a summer in the Ausable. Occasionally in the river, more often in the tributary streams, an angler will catch a dark colored trout with vibrant red, white, and black fins and red spots surrounded by blue halos. These are brook trout – one of two native salmonids in the northeastern U.S., and state fish of New York.

Brook trout thrive in the colder, rocky tributary streams that feed the West and East Branches. Their habitat includes some cold ponds and lakes in the region and they are present in the upper main stem of the East Branch in Keene Valley. Many of the Ausable tributaries serve as perfect nursery habitat, and many young fish grow through their first years there, reaching up to 3-4 inches by the end of their first summer after hatching. Adult fish in these smaller streams range from 6 to 14 inches. They can grow even larger in some of the area lakes and ponds.

Brook trout have been identified by New York State Department of Conservation as a species of greatest conservation need. They are native to all 18 watersheds of New York State, and their presence is an indicator of very good water quality and ecological integrity. While brook trout occur in high numbers in healthy watersheds, their range has contracted in all watersheds due to the effects of habitat fragmentation, riparian buffer and forest loss that leads to water temperature increases, and introduction of nonnative species. Wild brook trout populations persist in areas that have some resistance to climate change, and New York's Adirondacks is considered one of their last strongholds is in the northeastern US.

Maintaining resistance to climate change requires densely forested brook trout streams (which keep water temperatures cool), adjacent lands with little nutrient or pollutant runoff, and intact riparian zones that minimize erosion. In many parts of the brook trout's historical range, these conditions are only met in the headwaters of watersheds, and in smaller forest blocks that are fragmented by road crossings and other barriers. In the Adirondacks, however, brook trout are found throughout watersheds, from headwaters to mouth.

Despite the large proportion of public land and large tracts of privately held land in the northeast, brook trout are still facing major human-induced threats. The three major threats facing brook trout, as identified by the Eastern Brook Trout Joint Venture (EBTJV) and the NYS Museum's Atlas of Inland Fishes of New York (2016), are habitat fragmentation, increasing summer water temperatures, and competition from nonnative and introduced species, including brown trout. Habitat fragmentation is mostly caused by impassable road crossing structures and AsRA is working to reconnect streams in the Ausable watershed. Riparian and bank restoration projects in the watershed help re-vegetate stream banks and lower water temperatures. More study is needed within the Ausable system, but the presence of self-reproducing populations of non-native predatory fish, such as brown trout has been shown to depress brook trout populations. This can occur through competition and competitive displacement of brook trout by brown trout and has been documented in many other parts of the brook trout historical range.

The EBTJV has recently created tools that identify the eastern and central Adirondack region of New York State as having a high proportion of intact brook trout habitat and also a high probability of brook trout occupancy, even if these streams are faced with increases in summer temperatures between 2 and 6 degrees Celsius over the coming decades. Management priorities for this species, as laid out by the EBTJV, include protection of intact populations, collecting finer scale distribution data, improving water quality and reducing fragmentation, and building partnerships for research and conservation. For this reason, the Ausable River Association is working to improve water quality and connectivity in the region, and taking steps to understand the historical and current status of brook trout in our mostly intact watershed. Our long-term goal, working with a variety of researchers, fishing guides, and river lovers, is to understand, predict, and conserve the future of the brook trout of our Ausable mountain streams.