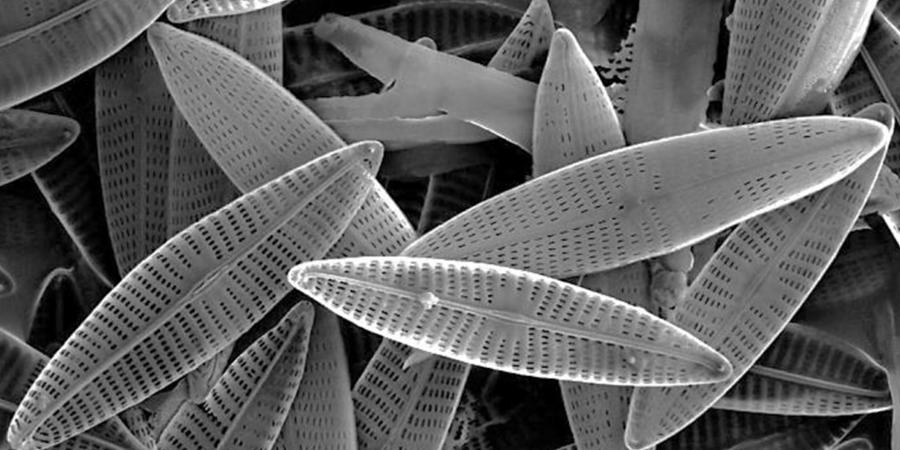 A group of single-celled organisms ubiquitous in freshwater lakes, streams, rivers, as well as marine environments is responsible for 20-50% of the oxygen you breathe. Amazonian rainforests and the boreal forest are referred to as the "lungs of the planet," but diatoms hold an equally rightful claim to that title.

Diatoms (Bacillariophyceae) are a group of single-celled algae that have ornate cell walls made out of silica. They are often referred to as brown-algae because of the color of their colonies. The glassy cell-wall is called a frustule and is comprised of two-halves called valves; the valves are held together with a series of girdle-bands. Some diatoms are planktonic, they are found in the open waters of lakes, ponds, large rivers, and the ocean. Others are benthic, living on the bottom. Some benthic diatoms have a raphe, a groove in their cell wall, that secrets mucilage that acts as a tread, allowing them to move over solid surfaces. This mucus, and the diatoms themselves, make rocks very slick. If you've ever wiped out on a slippery rock in a river, you can curse diatoms. 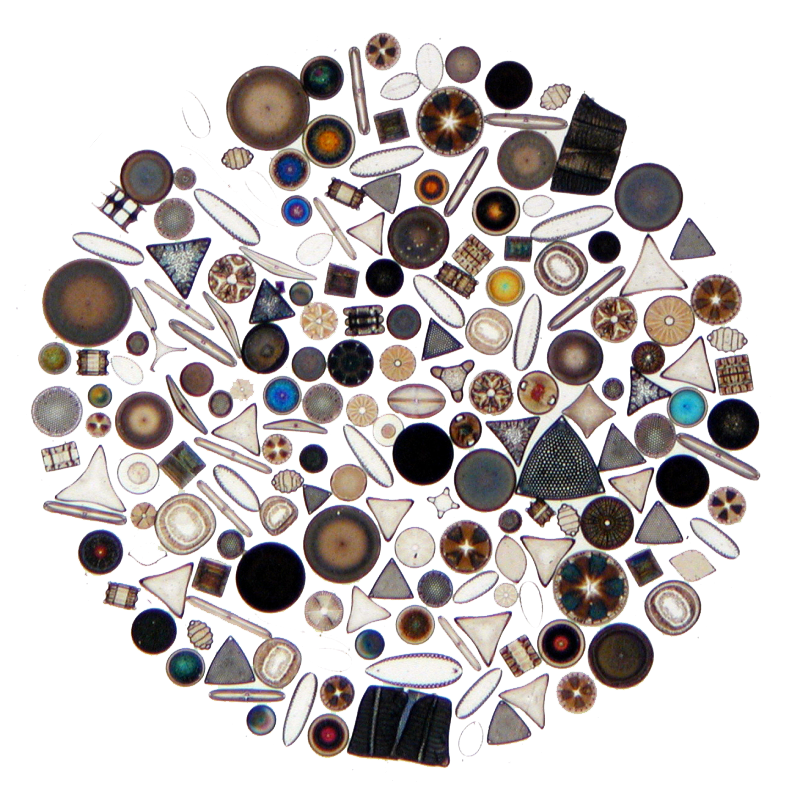 A representation of the diversity of diatoms (photo credit: wipeter)

Diatoms can be found in many other places, some a bit surprising. They are found in marshes, bogs, fens, on damp mosses, and rock faces. Some species make their home on the feathers of diving birds. Others are endoysmbionts, living inside other small organisms, such as dinoflagellates and foraminifera. In total, there are over 100,000 species on earth. Lakes can have more than 100 species living in them, with about a dozen being the most dominant.

The ubiquitous nature of diatoms, along with their diversity and cell walls that are resistant to decay, make them powerful allies in understanding the history of our lakes. Each species of diatom has particular environmental conditions in which it thrives. Some like acidic conditions, others prefer pH neutral waters, while others still like basic conditions. Some species do well in high-nutrient conditions and others fare better with fewer nutrients. There are diatom species that prefer high salt concentrations and others that are found only in freshwater.

By looking at the diatoms living in a lake, river, or pond we can infer a lot about the quality of the water found there. In lakes, they also reveal its history. Each year, as diatoms and other organisms die they settle to the bottom of the lake, slowly accumulating over time. By lowering a coring device into these soft sediments, scientists can retrieve this archive of the lake's past. Once removed it is thinly sliced, much like extracting the pages from a history book. Scientists then use these samples to identify the glassy remains of diatoms and reconstruct the history of the lake. 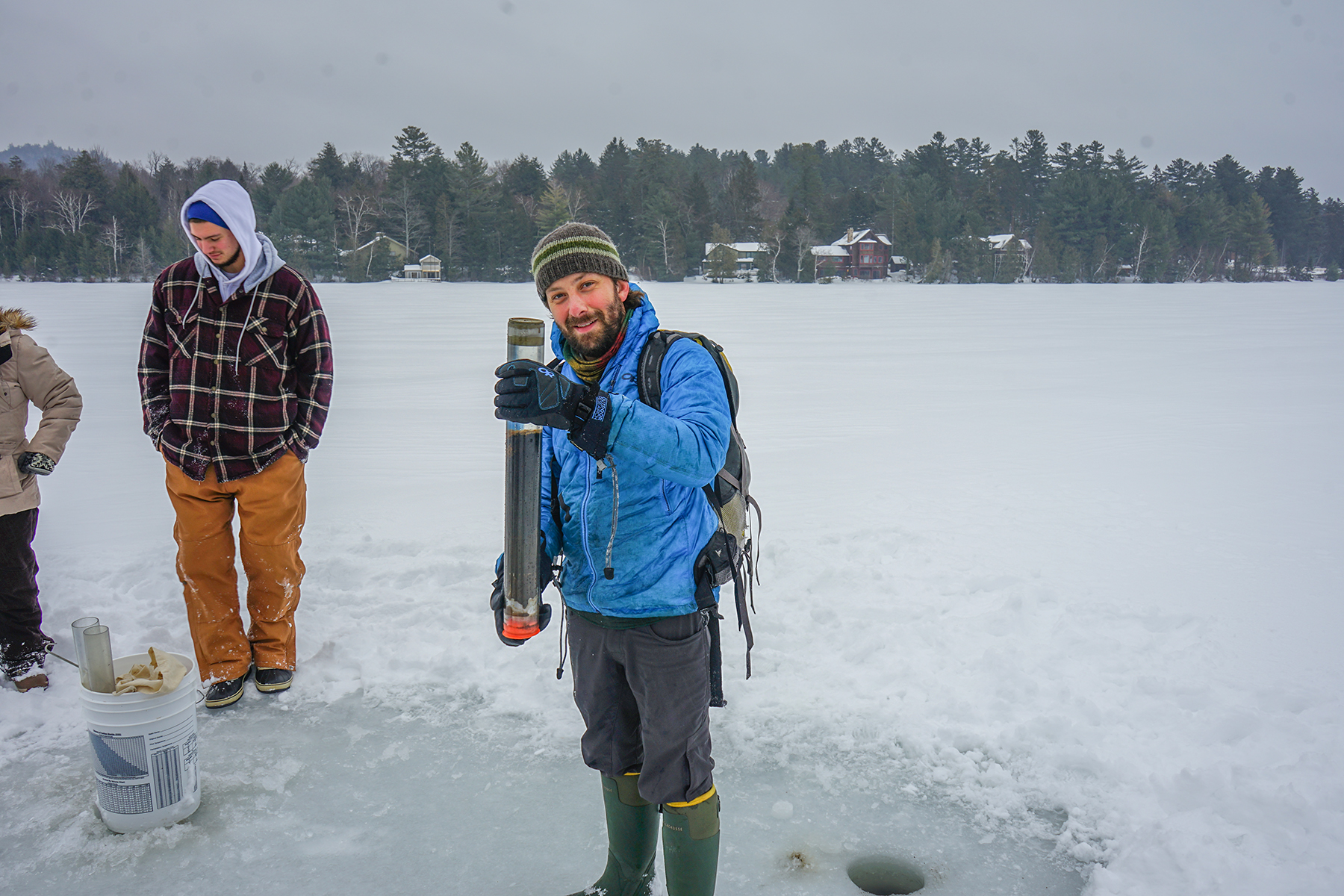 Ausable River Association scientists, in partnership with colleagues at Paul Smith's College and other academic institutions, have done just this for several lakes in the Adirondacks. They reconstructed the hydroclimate, how wet or dry the region is, by looking at diatoms in the sediments of Wolf Lake outside of Newcomb. More recently, they reconstructed the pH of Bear Pond in the St. Regis Canoe Area, documenting the acidification from acid rain and its subsequent recovery due to emissions reductions implemented as part of the Clean Air Act. And they have worked with Paul Smith's College students to look at the ecological history of Mirror Lake.

Diatoms are incredible microorganisms that are not only beautiful to look at under a microscope; they are also an essential part of local and global biodiversity. 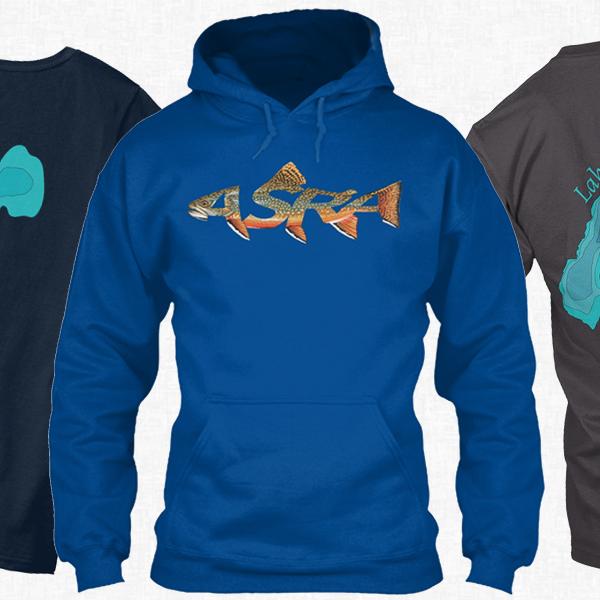 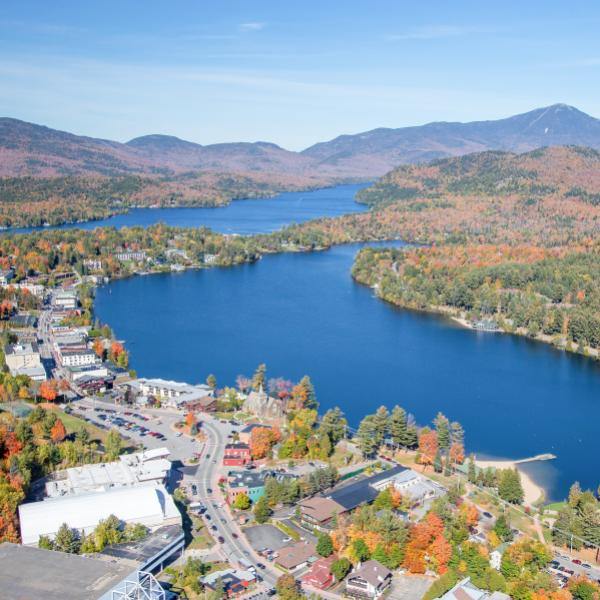