For the Birds: Riparian Birdlife along the Ausable

The riparian zone is the strip of land bordering a stream or river. The ecological communities in this zone are critical in many ways to the health of the river itself. They provide flood control, nutrient cycling, erosion control, buffering of runoff (from roads, pastures, croplands, forestry, and urban areas), wildlife habitat, and so much more. Moreover, riparian zones provide many social amenities – places to walk, hike, fish, bird watch, etc. Many books and papers have been written on these topics, and countless conservation efforts around the world are focused on riparian restoration. Here, we'll narrow our focus to riparian areas as wildlife habitat, and in particular habitat for birds along the Ausable River and its tributaries.

Birders, using eBird, have identified a number of “hotspots” for birds along the Ausable River and its tributaries. Places where significant aggregations of birds may be found include areas such the Chubb River where 110 species have been recorded in the lowland boreal habitat bordering the river; Intervale Lowlands Preserve (173 species) beside the Ausable River’s West Branch in North Elba; Hulls Falls Road and Cemetery Road Wetlands (126 species) along the Ausable River’s East Branch in Keene; and Ausable Marsh Wildlife Management Area (168 species) at the river’s mouth on Lake Champlain.  But one need not visit hotspots to find birds, as many species may be found wherever there are intact riparian habitats along the river.

Here are six common species you might encounter while kayaking or fishing, or while walking or driving alongside the river.

A familiar bird is the Western Osprey. This fish-eating raptor nests all along the lower reaches of the Ausable and its major tributaries where they build large stick nests. Sometimes confused with the Bald Eagle, another resident bird along the Ausable River, ospreys are distinguished by the dark patches on their underwings and their dark eye stripe with a white cap. They are excellent fishers, averaging a catch every 12 minutes or one in every four dives. This one has captured a yellow perch. 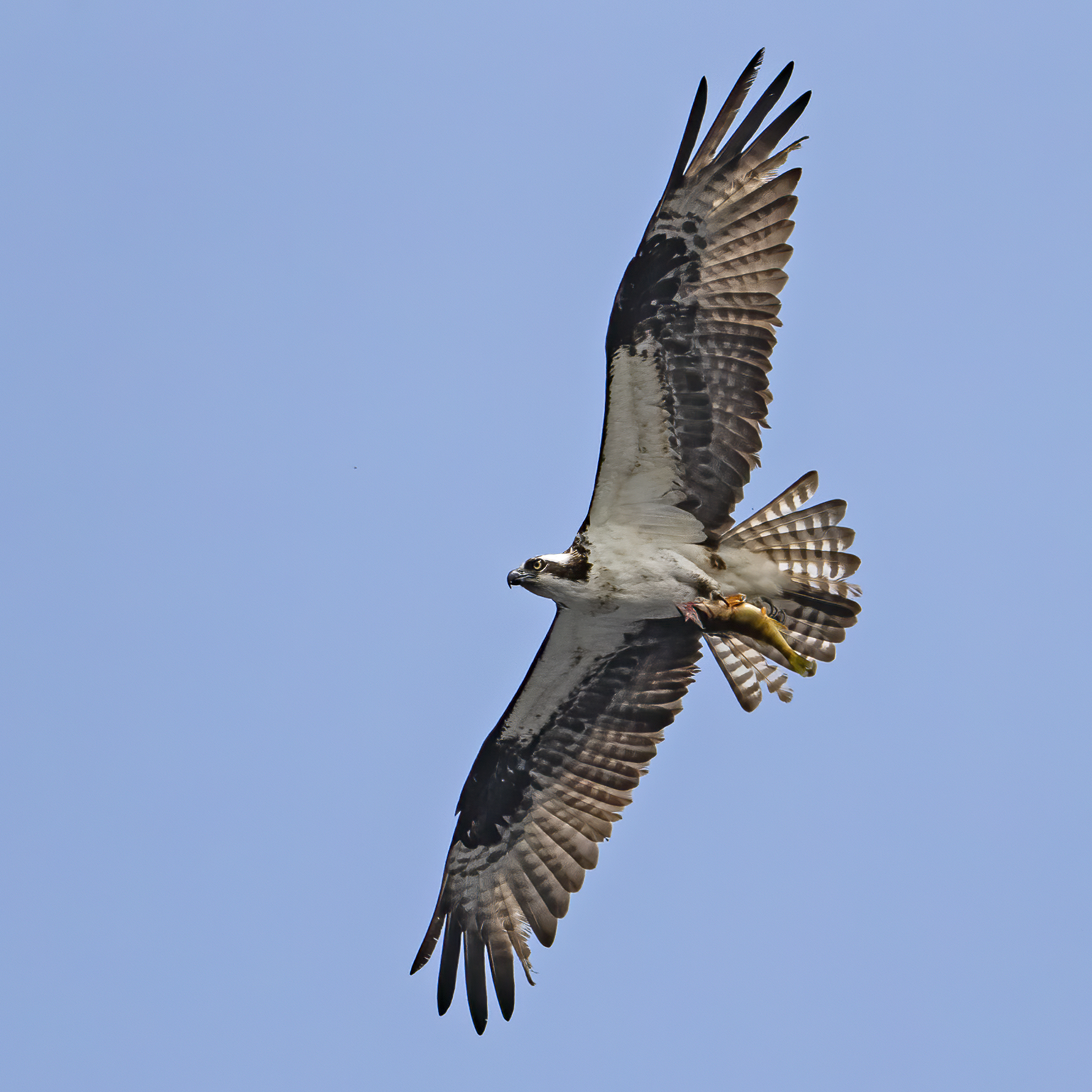 The duck most commonly observed in the river (and in Adirondack lakes) is the Common Merganser. These fish-eating birds occur here year-round. Male mergansers are striking birds with a dark head, red bill, and much white visible on the breast and sides. Like most ducks, male mergansers take no responsibility for incubation or taking care of their young. 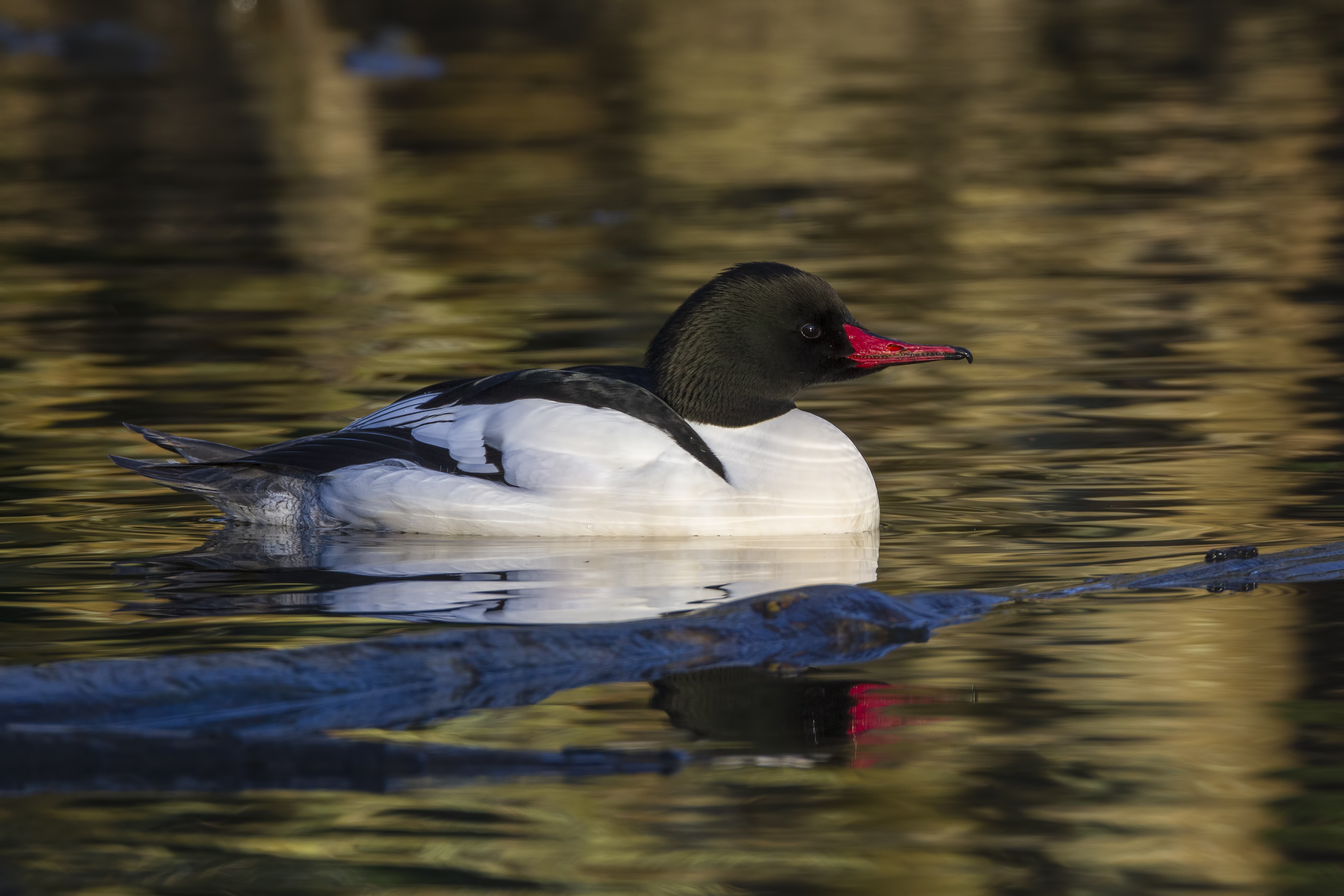 Female mergansers nest in tree cavities, or more rarely in nest boxes. Characterized by a rufous head with a shaggy crest, they are often observed with a dozen or more cute offspring in tow. These young mergansers will stay with their mother from late May until the fall months when they head to unfrozen bodies of water for the winter. 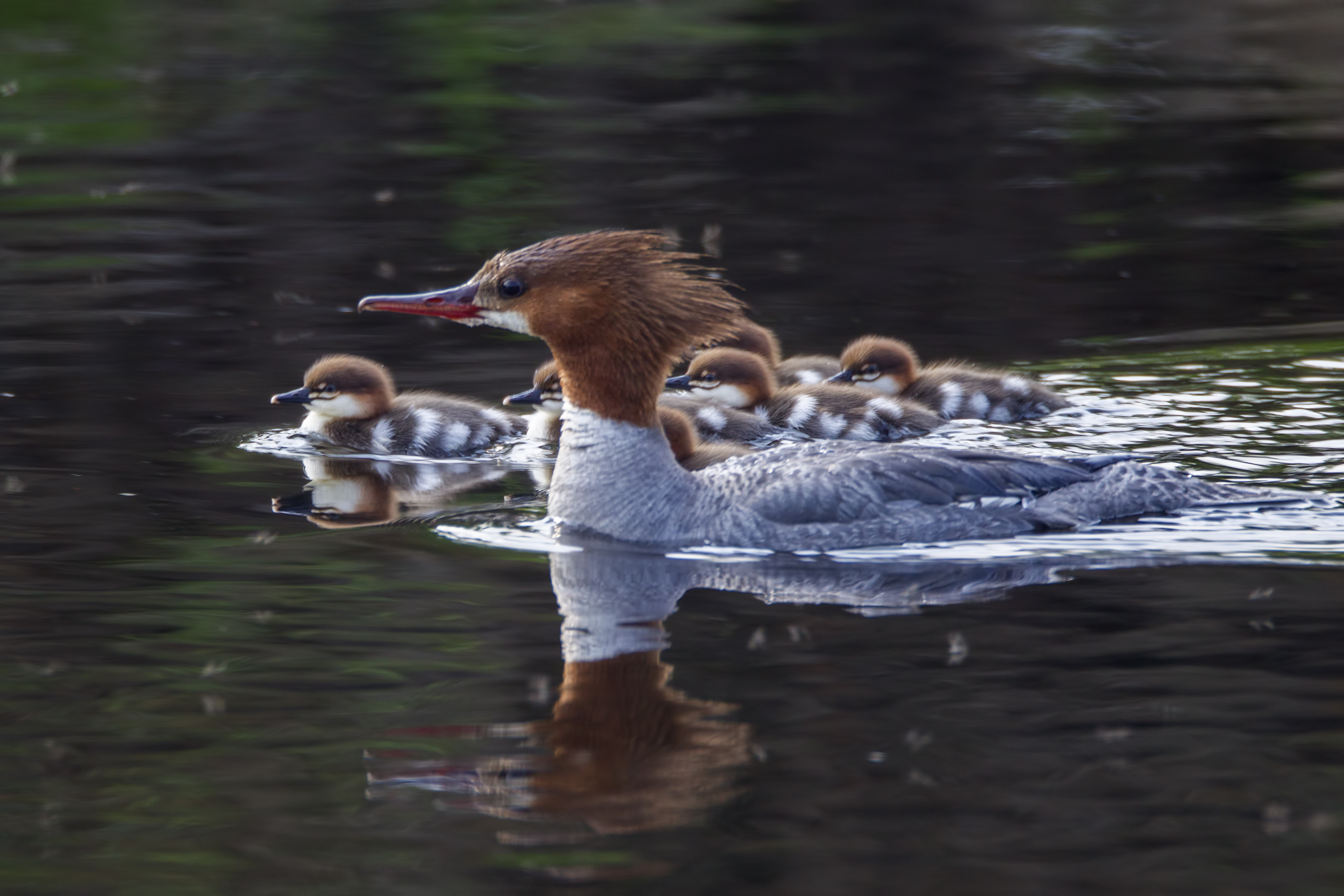 Everyone is likely familiar with the Great Blue Heron, a common summer resident of our riparian areas. They usually nest in loose colonies in wetlands near streams and rivers. They primarily feed on minnows, but opportunistically they will snatch other small critters that come within their reach. 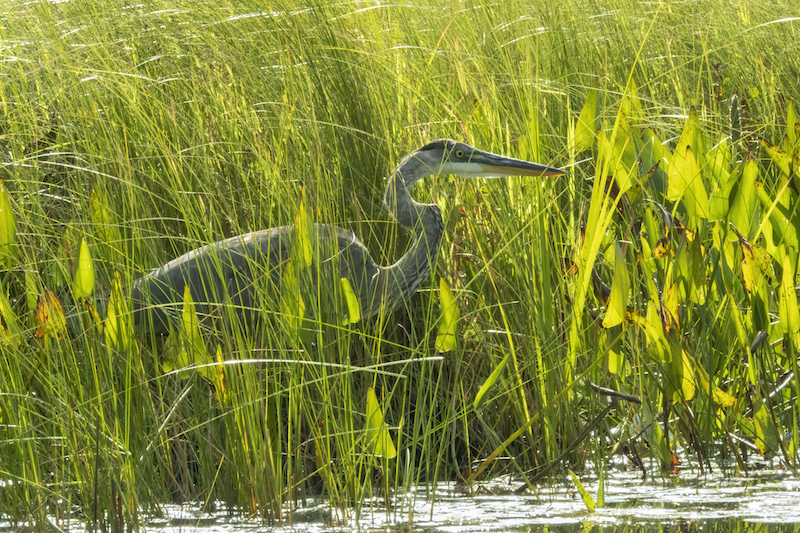 Most shorebird species nest in the Arctic, but the Spotted Sandpiper is an exception. This species is the most widespread shorebird in North America. They nest along the shores of the Ausable River as well as on lake shorelines in the Adirondacks. Spotted sandpipers are readily recognized by their teetering walk and weet notes uttered during a stuttering flight with downcurved wings. Unusual among birds, females arrive before males on the breeding grounds where she establishes and maintains a territory. Some females practice polyandry, laying eggs in as many as four nests for males who take primary responsibility for incubating the eggs and taking care of the young. 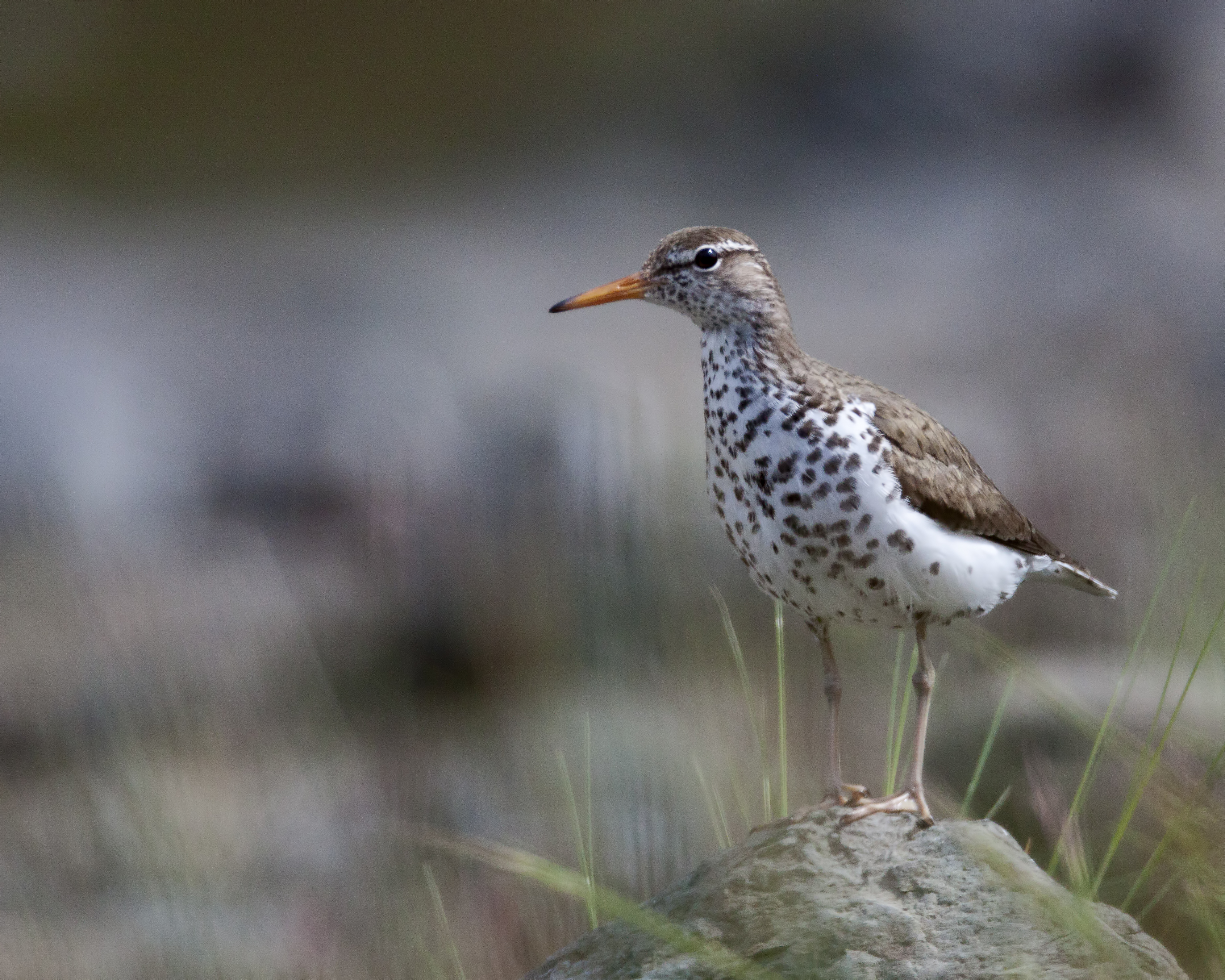 Belted Kingfishers are another common resident along the Ausable. This fish-eating bird nests in cavities it excavates in sand banks. Its distinctive clattering rattle call is often heard before the bird is seen. Unlike most birds, the female, whose flanks and belly sport a rufous patch, is more brightly colored than her mate. 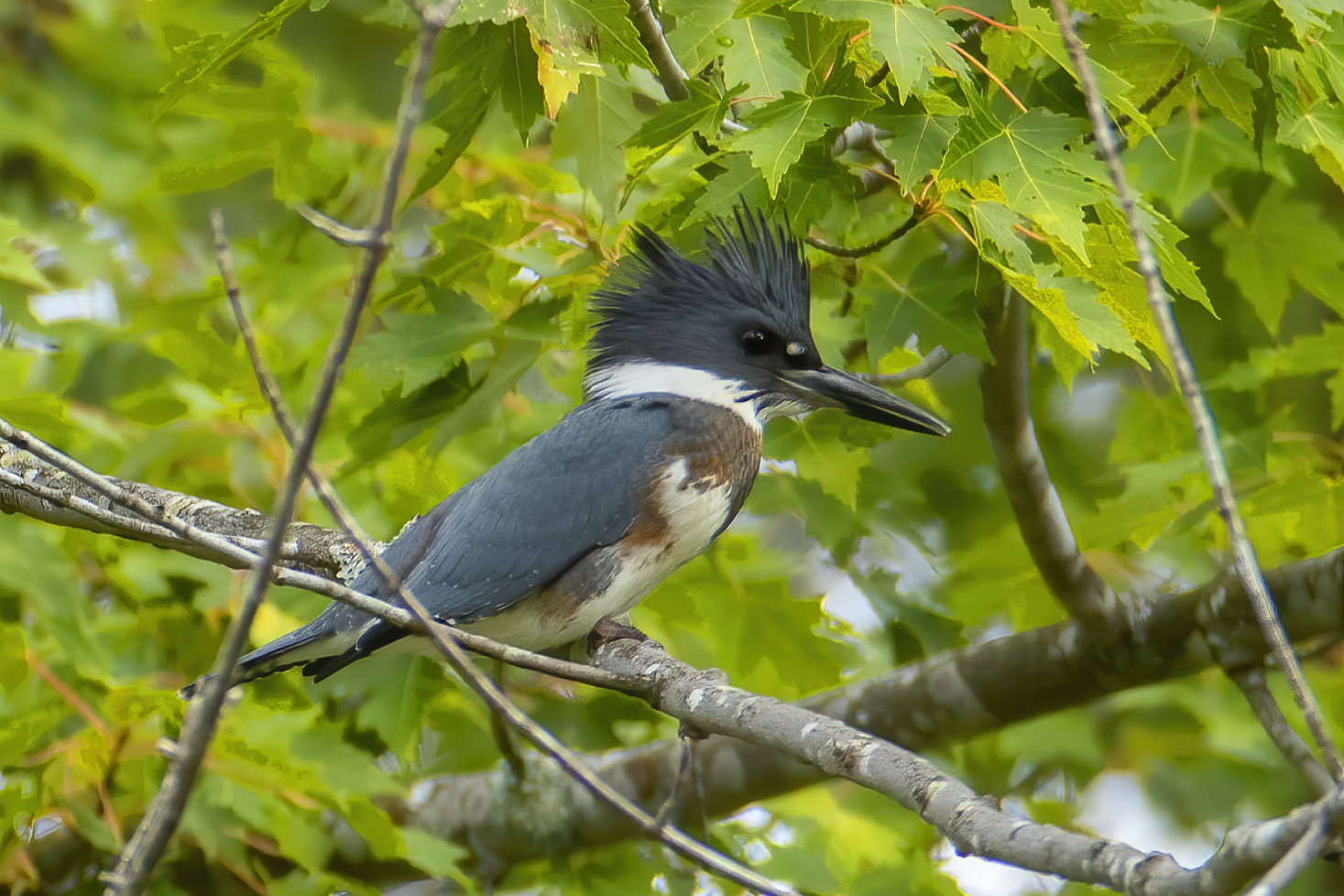 What do these five species and the two hundred or so other bird species that occur in riparian areas alongside the Ausable River and its tributaries have in common? They all need clean water, unpolluted by excess phosphorous, salt, or other chemicals; water with native fish, amphibian, and invertebrate communities; a free-flowing river with natural flows, buffered by intact riparian ecosystems relatively free of invasive species, and with shorelines restored as needed with natural bank stabilization and plantings of native species.

These attributes, and more, are what we at the Ausable River Association strive to realize, working cooperatively with a wide array of organizational partners, often behind the scenes and far from the limelight. We dream big, plan carefully, and then get good work done. Join Us.

This guest blog post was written by Ausable River Association board member Larry Master. Photos are all by Larry Master, www.masterimages.org