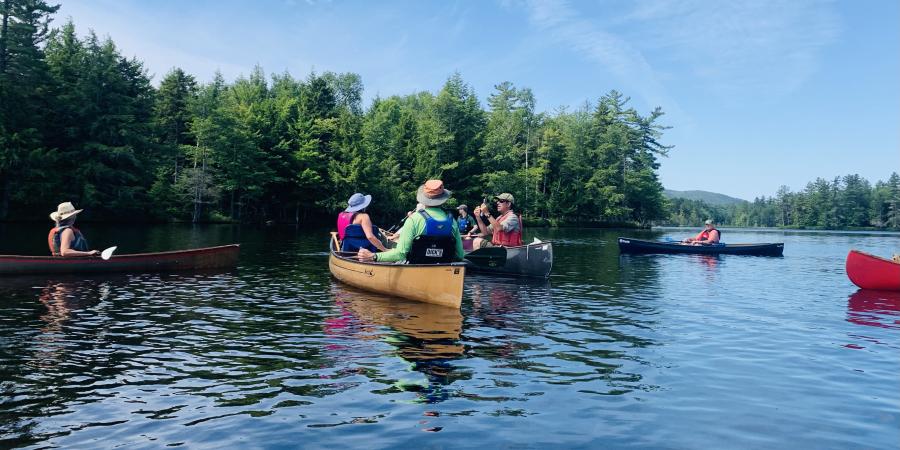 Journey to a Lake’s Past

On a beautiful July morning, we hosted a floating watershed tour on Lower Saint Regis Lake led by renowned local scientist and professor Dr. Curt Stager. Dr. Stager has studied the environmental history of lakes around the Adirondacks and the world, and his knowledge of Lower Saint Regis is nearly unmatched, as he's been involved with studying it for decades at Paul Smith's College.

To contextualize the science that's taken place on Lower Saint Regis, the tour began with an overview of human history on the lake, which started over 10,000 years ago when the first people moved into the area. In 1851, the lake was dammed to power a sawmill and in 1858, Apollos "Paul" Smith, a local guide, began building the Saint Regis Hotel, which would later become Paul Smith's College. From this point, more and more people came to the lake to enjoy all it had to offer, with little thought to the consequences of their actions and development on the lake. In the 1960s and 70s, the lake's health hit a tipping point and it was often green in the summer, covered by thick blooms of algae. At this point, scientists from the Department of Health and the Environmental Protection Agency were called in to study the lake and figure out the source of the problem to help the Lower Saint Regis community fix the issues.

As we paddled out to the deepest part of the lake, tour participants then got the chance to learn about some of the tools that are used to study the health of a lake and use them first hand to contribute to the long term monitoring of Lower Saint Regis Lake. 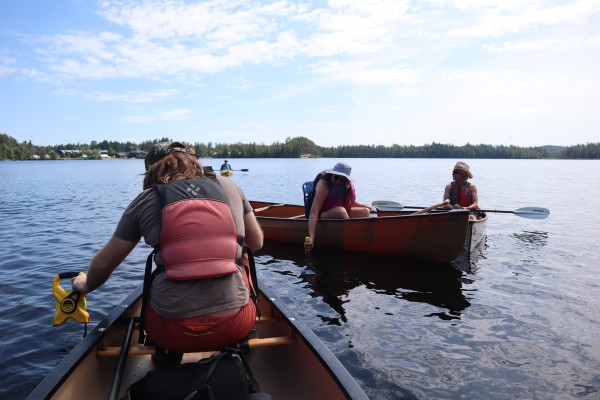 We started with the Secchi disk, one of the simplest, but still effective, water quality tools. A Secchi disk is a circular black and white disk that is slowly lowered down into the water until it is no longer visible. The depth at which the disk can no longer be seen is recorded and serves as a measure of water clarity. On the day of the tour, we could see the Secchi disk for about two meters before it disappeared into the water; in the 1970s it was often less than a meter as the water was clouded significantly by algal activity and other pollutants. 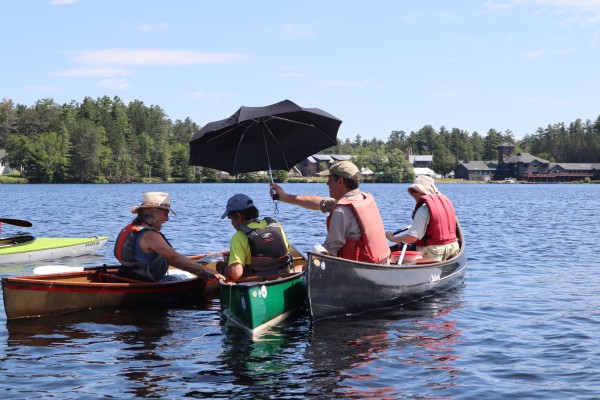 Tour participants compare the color of the lake to a water color chart; the shade from an umbrella helps to get an accurate observation.

Another simple but powerful water quality measure is to look at the color of the lake. A standard set of water colors are used to compare to the water you are sampling. Once you've determined what color your sample is most similar to, you can refer to the guide that comes with the water color chart to interpret what your sample means. On this day, the water was a tea like color, a common color for Adirondack lakes, due to the tannins, a brown colored chemical compound, from leaves and pine needles that surround the lake, much different than the bright green the lake was 50 years ago. 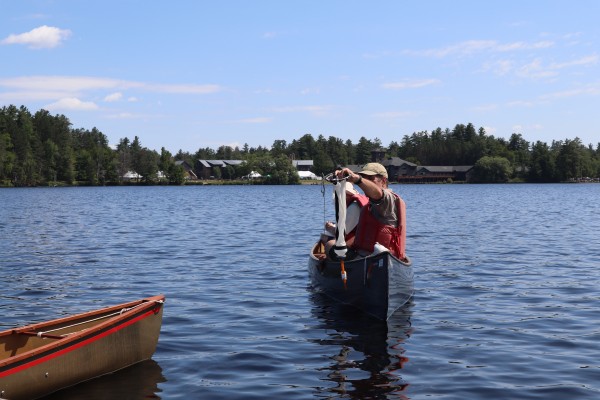 After looking at the water color, Dr. Stager then discussed plankton tows. Plankton tows, as shown in the photo above, are nets that are dragged through the water to look for tiny plants and animals living in a waterbody. On this day not much was captured in the net, but back in the 1970s the net would likely have been overflowing with algae.

Through the use of tools like these, it was eventually discovered that the main cause of Lower Saint Regis’ issues back in the 1960s and 1970s was improper disposal of human waste from the buildings along the shore, largely due to failing septic systems. These studies and findings not only impacted Lower Saint Regis Lake, but they also played an instrumental part in helping us understand how excess nutrients affect waterbodies worldwide.

Support our clean water and public outreach work. Give with confidence today! 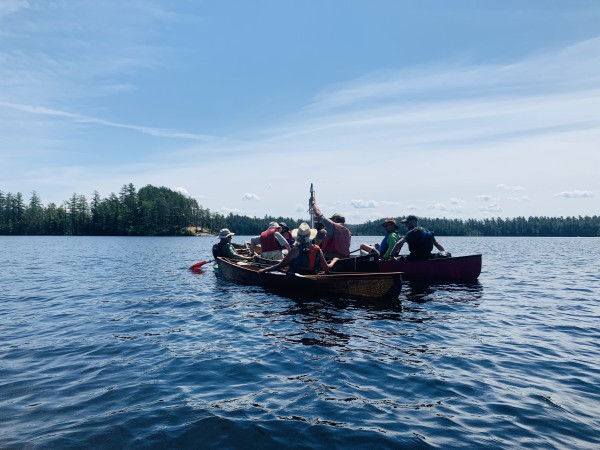 Tour participants looks at a sediment core pulled up from the lake.

Last but not least, it was time to journey to the deep past of this lake. We used a tool called a sediment corer, a tube-like device that is dropped down into a lake that brings up a sample of what lays at the bottom. From this, we can read those layers of sediment from the bottom of the lake, much like tree rings are read, to learn what happened thousands of years ago. With the mud and silt in hand – Dr. Stager pointed out where the lake layers had recorded the major events he had discussed earlier and hypothesized how the lake might record the current era for those in the future to look back upon.

This tour was a part of AsRA’s Guided Watershed Tours. Interested in attending one yourself? Click here to learn about our upcoming tours.

Thanks to the United States Environmental Protection Agency, NEIWPCC, and the Lake Champlain Basin Program who help to fund our Guided Watershed Tour Program.

Story written by Carolyn Koestner, GIS and Science Communications Fellow. Sign-up for our e-newsletter to get weekly updates on the latest stories from the Ausable River Association. Your Support = Solutions
We need your help to reach our 2022 summer fundraising goal!