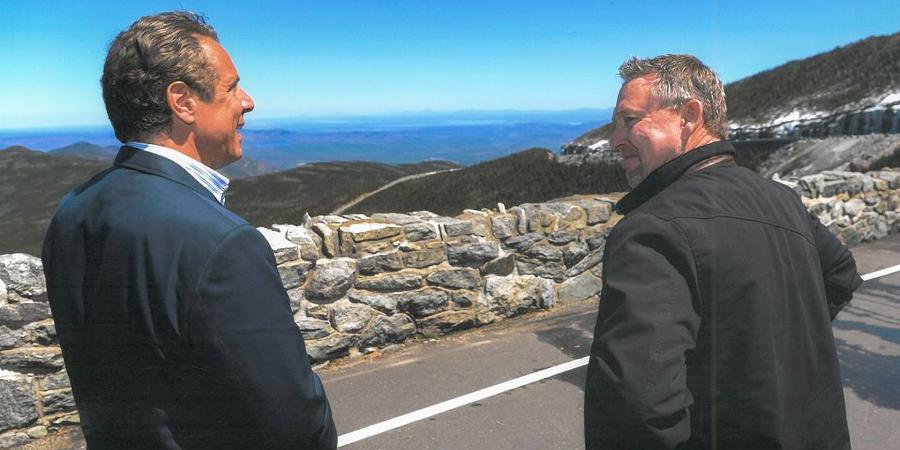 When he latched onto a cause, Randy Preston was the shortest distance between two points. While he wasn't a career politician, the Wilmington supervisor had that intangible knack for knowing just who to call, which people to assemble in the room, and which buttons needed to be jabbed to produce the desired result.

Thankfully for the health of the Adirondacks, one issue that attracted Preston's attention was the excessive use of road salt, which science shows is seeping into lake and well water, negatively affecting the ecology and putting human health at risk. Preston's was an early shoulder to the wheel of what has grown into a park-wide movement to find more environmentally friendly ways of treating winter roads.

It is an effort that Preston did not live to see through to completion. He died on July 18, 2019, at the age of 60, following a lengthy battle with brain cancer.

He will be remembered as a champion of many worthy pursuits. Friends, family and associates agree his death is a loss not just for Wilmington, but for all the Adirondacks. In his 11 years as supervisor, he turned Wilmington from a four-way stop between the Northway and Lake Placid into a destination.

Wilmington, with reason, snapped up the title of Mountain Bike Capital of the Adirondacks, for the 23 miles of trails Preston helped the Barkeater Trails Alliance develop in the Wilmington Wild Forest. Preston also initiated a branding effort to associate Whiteface Mountain with Wilmington instead of Lake Placid. It was an audacious play by an audacious man. Audacious, but right. Whiteface is primarily in Wilmington and, as Preston saw it, it was entirely unjust that Lake Placid should get the glory.

Preston had been on a slow boil for years as he watched the Whiteface Veterans' Memorial Highway deteriorate into chunks of fractured macadam. He combined strategy and opportunity to change that. First, he contacted a reporter for a newspaper he knew the governor read and took her on a tour of the mountain, where she did a photo spread of decades' worth of damage. Next, he took his case to the governor himself, using a cocktail reception at the Governor's Mansion to bring his effort home. The visuals laid the foundation for his passionate direct plea. Soon after, Governor Andrew Cuomo announced $12 million in funding for repairs. 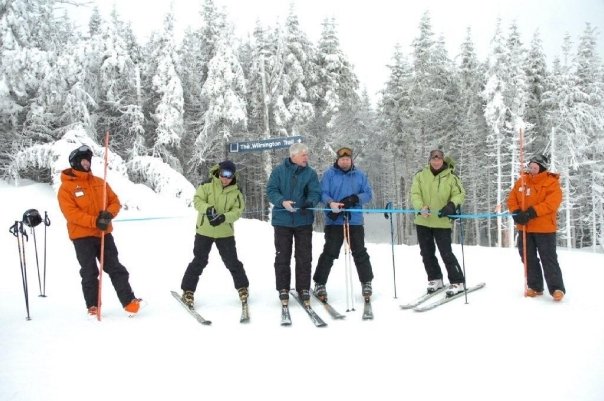 It was difficult for the governor, or anyone, to say no, because that would never be the end of it. Where Preston was concerned, you had two choices: you could do it his way or you could wish you had. His allegiances, said his wife Michelle, were never in lockstep with any party, agency, or group. He was known for locking horns on one day with someone whom he had fought side-by-side with the day before. It was a matter of what he believed was right. He was adept at melding the desires of his community with what he felt was in its best interests — which were not always the same.

His work to reduce road salt was a case in point.

People have always known that sodium chloride melts snow, but in 1938, New Hampshire put two and two together and began spreading it on highways. It worked like a charm, which turned out to be good and bad. The driving public could easily see the ice melt, but they could not see the salt filtering into the water table.

In the Adirondacks, where people knew a thing or two about driving in snow, no one took a particular interest in salt until the 1980 Olympics brought concerns of southern drivers wiping out on icy mountain roads. Salt came to be seen as a town supervisor and a highway superintendent's friend. So it cut against the grain for Preston and Wilmington Highway Superintendent Bill Skufca to be early opponents of salt. But not entirely.

Michelle said that she and Randy would travel to some of the world's most celebrated spots, but no matter how beautiful the backdrop, Randy would pull out a photo of Whiteface and say, "this is my home." He had a deep affinity for the Adirondacks and was always quick to work against anything that would harm his beloved mountains — and the people who live here. When task forces began to form to investigate the effects of road salt, Preston was at the table. This desire to serve was complemented by a second attribute not widespread in the political world today: a willingness to listen to science. Michelle recalls that, "Even if he didn't understand it all, he'd say, 'there are people smarter than me on the committee.'"

The best leaders are also the best listeners. "He would definitely sit back and take it all in before making up his mind," Michelle said. He'd ask the people of Wilmington what they thought. And he'd ask scientists to see the data. He would also look at what the town was spending on road salt.

And once he had made up his mind — boy, howdy.

Preston didn't just grab the bull by the horns, he was the bull. "Randy wasn't one to sugarcoat things or spoon-feed you," recalls Moriah Superintendent Tom Scozzafava. "If he had a point to make, he made the point. But I would rather deal with that than with someone who smiles to your face and stabs you in the back."

It was the threat to water quality that really got Preston hooked on the salt issue, Scozzafava said. To Preston, the Ausable River was Wilmington's lifeblood. Rivers can cleanse themselves of contaminants more easily than wells and lakes, but this sparkling, rushing water is symbolic of everything that is good about the Adirondack way of life. Like the river current itself, Preston became a perpetual force for clean water. For the fledgling antisalt movement, he was a powerful ally. He was also that rarest of breeds, a pragmatic fanatic. "He knew what was feasible and what was not feasible," said Brittany Christenson, executive director of ADK Action, an advocate for Adirondack communities. "But he was very concerned about water quality and, when I needed help, he was the first person I called."

Preston was front and center at the first conferences on salt in 2012, and he knew which people needed to be at which meetings to obtain results. And, even if he knew that change had to be incremental, that didn't mean he was happy about it. 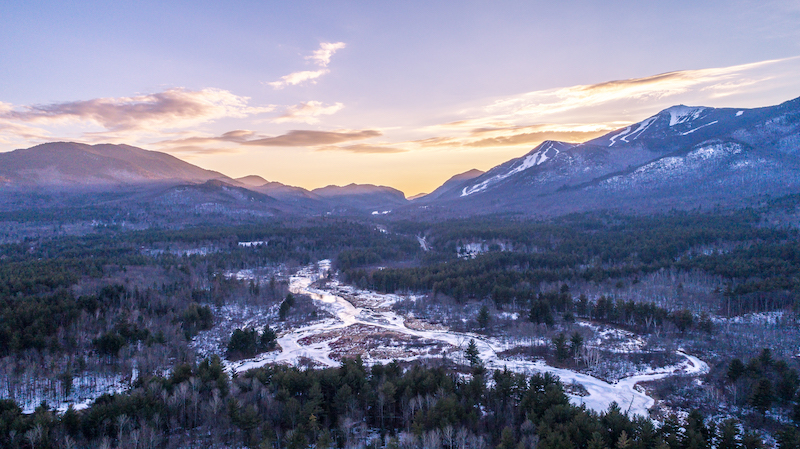 Wilmington is home to Whiteface Mountain and a focal point along the West Branch Ausable River.

You probably did not want to be riding in a car with Preston during a minor snowstorm if you were behind a salt truck scattering its load with abandon. "If it wasn't a bad snowstorm and he was following a truck dumping salt for no reason, it would drive him crazy," Michelle said. It also raised another point with the supervisor: driving in the Adirondack snow had always been manageable when people were not in so much of a rush. In the pre-salt days, it had been a fact of winter Adirondack life that the roads would be white and drivers would adjust their habits accordingly. The idea of asphalt free of even the smallest flake is relatively new. As a lifelong first-responder, Preston understood the importance of safety and knew the strategic value of salt. But that was not license for a knee-jerk application, inconsiderate of the severity or character of the storm.

Early work on salt reduction took root in Lake George, where road-salt use today has been cut by 50 percent, said Eric Siy, Executive Director of the FUND for Lake George. It is work that conservationists couldn't have done without the help of interested people in government. "We stand on the shoulders of giants, and Randy Preston was one of those giants," Siy said.

Salt-reduction pilot programs have now expanded into the heart of the Park, with Wilmington leading the way. Mirror Lake, the selfie-inspiring backdrop for Lake Placid shoppers, lapping as it does up to the historic village's Main Street, is where the accumulation and effects of salt are among the most well-documented. Scientists with the Ausable River Association discovered in 2015 that salt was accumulating in the lake and affecting its health; since then, they monitor it biweekly. The Village of Lake Placid and Town of North Elba are working with the Ausable River Association and others to reduce the use of road salt and its impacts.

In December of 2018, efforts in Wilmington and Lake Placid prompted the state to announce a salt-reduction pilot project on Rt. 86 between Wilmington and Lake Placid. The 16-mile stretch of highway is both strategic and symbolic. The highway hugs the bank of the West Branch of the Ausable; highway runoff has nowhere else to go but into the river. The river, fed by cold rivulets from the flanks of mighty Whiteface, is one of the Northeast's most celebrated trout streams, as well as an iconic viewshed of calm pools and urgent falls, making it one of the most popular drives for Adirondack sightseers.

This pilot program employed a variety of salt-reducing techniques, as well as encouraging slower speeds, and will doubtless inspire further salt reduction initiatives in the Adirondack Park. It is also a legacy of Randy Preston's and a gift to the community that was his lifelong joy. He took comfort in it as he left this world. "He passed away at home," Michelle said, "looking at Whiteface Mountain."

This article was authored by Tim Rowland. It originally appeared in the Fall 2019 Voice of the River. The top photo of Governor Cuomo and Randy on the Whiteface Veterans' Memorial Highway was provided by Michelle Preston.