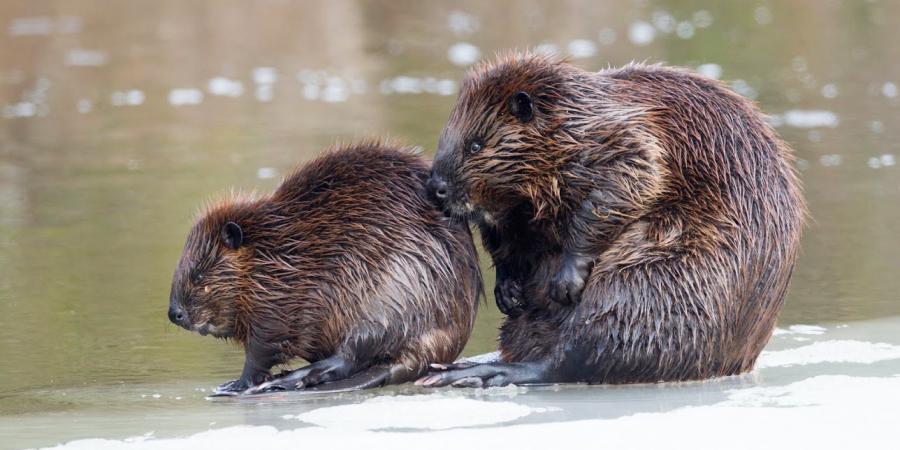 Beavers (Castor canadensis) occupy a special place in our history. Their fur was so highly regarded that trapping for beaver pelts provided much of the impetus for the exploration and colonization of the U.S. and Canada. But unregulated trapping took its toll, and beavers, estimated to number between 100 and 400 million in North America prior to European settlement, were extirpated in most areas. When C. Hart Merriam published The Mammals of the Adirondack Region in 1884, the only known extant Adirondack beaver colony was in southern Franklin County. Today, 130 years later, with laws for their protection and a lack of natural predators (e.g., wolves), beavers once again flourish throughout much of their former range, and their beneficial impacts on aquatic ecosystems and their inhabitants are again evident.

Beavers are perhaps best known for their engineering works: dams, lodges, and canals. These works, which have inspired writings for centuries, including Lewis Morgan's classic natural history study, The American Beaver and His Works (1868), are constructed to provide access to food and protection from predators.

Morgan identified two types of dams. Stick-dams are typically constructed on brooks and larger streams without banks, and they are largely made with sticks on their downstream face and mud mixed with sticks on their upstream face. Water percolates through the length of this type of dam, and beavers instinctively react to the sound of leaks (flowing water) and seek to repair them. A second type of dam, the solid-bank dam is typically constructed on streams with defined banks; earth and mud covers a base of brush and poles and both sides of the dam look like a solid dike. Water is discharged through a single opening on the top of the dam, allowing for easier regulation of the water level and less maintenance than if water flowed over the entire top surface of the dam. The constant water level provided by a dam allows for a constant water level in a beaver family's lodge. Inside the lodge, the floor of the inner chamber is typically 2-6" above the water level and the entrances to the lodge are typically 2-3' below water level. On rivers too large for dams, beavers burrow into the river's banks rather than construct a lodge.

A series of dams are often constructed on one stream, allowing safer travel up and downstream for the beavers and reducing water pressure on the dam immediately upstream of another dam. Beavers may excavate canals through lowlands bordering beaver ponds for the purpose of reaching hardwoods and affording a channel for safe transportation to their lodges. These may be as long as 1⁄2 mile with one or more small check dams along their length!

The late fall is the most active season for dam and lodge construction and for food procurement. The preferred foods of beavers are the inner bark of deciduous trees, especially birch, cottonwood, poplar, and willow, but they also consume roots, tubers, and grasses. The best time to see beavers in action is an hour or two before sunset when they can be easily watched if one moves slowly and quietly near their ponds.

Sometimes beavers can be a nuisance, for example when they cut down ornamental trees or when they block road culverts and cause minor flooding. However, there are numerous "beaver-deceiver" devices and chemical techniques to prevent these issues without repeatedly having to kill or relocate the perpetrators and other beavers attempting to recolonize an area.

Authored by Larry Master. A version of this article first appears in the "Adirondack Explorer."