Travelers on Haselton Road between Wilmington and Black Brook this past August were met by an unusual sight. Two large excavators and an off-road dump truck moved in and out of the river, placing dozens of five-foot boulders down the center of the channel. The late summer project was part of a multi-year effort to restore channel form and function in a section of the river known by anglers as the Dream Mile. It focused on 1,100 feet along a wide bend with the fabled Culvert Pool at its center.

The project began in 2015, after the landowners expressed a desire to restore the deep pools, oxygenating riffles, and riparian cover needed to support a stable wild trout population in this reach. Over 20 to 30 years, they and others fishing this area noted that water temperatures had increased, as had the width of the wetted channel. At the same time, pools filled with sediment and riffle crests disappeared, leaving the reach more homogenous in appearance. Habitat for trout diminished and populations declined. To a stream restoration specialist, these observed changes are symptoms; behind them lie a variety of causes.

If you step out of the Dream Mile and look around, or hover above with a drone, you can see several. Most obvious is the road, which runs alongside the river and cuts it off from its floodplain, from multiple small ephemeral streams that once drained directly into the river, and from Big Brown Brook – a perennial trout stream that runs through a 40" pipe under the road and meets the river to form the Culvert Pool. Where the road hugs the river, riparian cover is lacking. Over the years, the road – a vital transportation artery – has been raised in an effort to keep it safe in flood flows. In short, as its watershed has been developed over many decades, the river here, and in other places along its roughly 34-mile traverse, has been straightened, encroached upon, hardened, deforested along its banks, and confined. This has led to disconnected floodplains, poor riffle/pool structure, decreased habitat diversity, eroding banks, narrowed riparian buffers, reduced sediment transport, and degrading water quality and habitat diversity.

Much of the work that goes into the restoration efforts of the Ausable River Association (AsRA) involves assessing the root causes of changes in a given section of the river. The goal is to create a balanced, self-sustaining system that is resilient, even during large floods, and provides habitat for native species, especially native brook trout. But because humans share the watershed with the river, other goals – protecting infrastructure and public safety – are also essential. Since 2010, AsRA has led several in-stream restoration projects in partnership with the U.S. Fish and Wildlife Service (FWS) and the Adirondack Chapter of Trout Unlimited with support from private donors and from NYS Department of State under Title 11 of the Environmental Protection Fund. These partners came together again to study the Dream Mile and to identify solutions that would set it on a path to resilience.

Project planning, geomorphic surveys, design, and permitting took place in 2016 and 2017. Phase one of construction was completed in August of 2017 and focused on the upstream half of the project. The skilled construction team began by removing a cobble bar in the center of the channel that split flows and forced water against the banks. That rock and sediment was used, along with local trees with intact roots and large boulders, to build a 400-foot long earthen bench, known as a toe wood structure since it creates a new, submerged, toe of the bank. The 30-foot deep bench sits just above normal low flows. It is constructed of 60 to 80-foot trees, 18 to 24 inches wide, laid horizontally, angled slightly downward toward the water with 10-15 feet between each root crown. Natural materials are layered and anchored on top of the trees so that, in a year's time, the bench will be indistinguishable from other healthy banks on the Dream Mile. The bench narrows the channel and plays a vital role as water rises. In a bankfull or high spring flood, water will move up onto the bench, slowing its velocity and providing protection for the road. The toe wood is resilient, easily withstanding high flows and ice, providing habitat, absorbing stream energy, slowing flood water, and angling it back into the channel.

At the upstream end of the project area, above the toe wood, the team restored the riffle crest, building a channel-wide network of large boulders, strategically placed, embedded in the channel, and locked in place with smaller boulders. Set at a precise elevation, in tune with the river up and downstream, the riffle sets the slope for the project area and creates converging flows that reinforce a single channel to transport sediment more effectively. The large boulders provide holding areas for trout and roughen the water surface, oxygenating the water. On the far bank, an inside bend where stream energy is lower, the team created a low gravel bar, incorporating wood and logs to ensure stability. If we surveyed correctly and designed according to the river's needs, this restored section of the Dream Mile will maintain the width, depth, slope, and variability of this narrowed channel, recruiting material as needed, scouring the deep pool and rebuilding its slope-defining riffle.

Work in 2018 followed the same general principles. Toe wood on the outside bend, enhanced gravel bars on the inside bend, and setting the next downstream riffle crest with another engineered structure built to mimic nature. The project will be monitored, reassessed in the spring, and final touches added in late summer 2019. All to reestablish stream functions that ensure water and sediment moves through the system efficiently, creating and recreating a dynamically stable form. 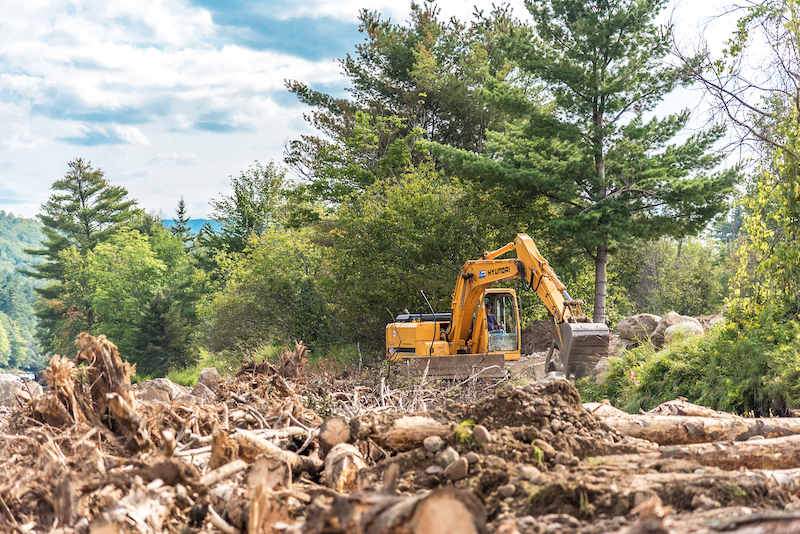 Construction of a toe wood structure along the Dream Mile on the West Branch Ausable River.

If a river has a job, it is moving sediment. Luna Leopold, a pioneer of fluvial geomorphology (and Aldo Leopold's son), called streams "transporting machines" for sediment and water. As such, they have two goals: to perform a minimum of work, and to expend energy uniformly. A stream system is in equilibrium when these goals are balanced. But streams are always adjusting; coping with a year of heavy rainfall, a temporary log jam, or the incremental process of natural bank erosion. Equilibrium means a stream is dynamically stable; it can adjust to changes in its environment – a process that involves eroding banks, shifting channel pattern and location, and rebuilding floodplains. When a stream, especially a meandering, low-slope stream, is confined by development or its channel is altered, the adjustments the stream needs to make can conflict with human needs and public safety.

The Dream Mile's decline and restoration is one chapter in a wider story. The vitality of the West Branch Ausable River and the reputation of its renowned fishery belie a river at risk of losing key stream functions that keep its waters and wildlife healthy. It's not a rapid decline of water quality or imminent collapse of populations at risk, but a slow unraveling of capacity, balance, and resilience. It is most evident in low slope sections such as the Dream Mile, or upstream where River Road runs alongside the West Branch in North Elba. In these places, roads hug banks armored with riprap, bridges encroach on the channel, and the river cannot access its floodplain, so stream energy and sediment are trapped in the channel. The impacts of such encroachment and alteration are exacerbated by extreme weather events such as Tropical Storm Irene – accelerating bank erosion, channel widening, and sediment accumulation. Fortunately, such changes can be assessed and understood, and lasting solutions can be achieved. It is a time-consuming and costly process, but one that AsRA, with its partners, has honed and is continuing to refine.

AsRA's staff first began noticing changes in the West Branch in 1999, a year after it was formed. Efforts to catalog conditions led to a study in 2005-6 that evaluated bank height and active erosion for the entire Ausable system. The section of the West Branch from the ski jumps to Bassett Flats scored highest in terms of existing bank erosion, vulnerability to further erosion, and likelihood of increasing sedimentation. AsRA's search for methods to understand these declines and find effective, long-lasting solutions led us to adopt the in-stream restoration methods used by the U.S. Fish and Wildlife Service (FWS). In 2010, working with FWS experts, AsRA built the first natural channel design toe wood structure in the Adirondack Park, on a badly eroding section of the West Branch along River Road. This successful demonstration project proved the value of in-stream restoration and provided permitting agencies, the public, and community leaders with an opportunity to see first-hand the effectiveness of this approach. The timing was good.

One year later, Tropical Storm Irene drenched the Northeast. Since then, AsRA's staff has completed training in stream restoration assessment and construction approaches and expanded the use of natural channel design methods in the Ausable watershed. Eight successful AsRA-led stream restoration projects on the East and West Branches of the Ausable and on two tributaries have repaired over 5,000' feet of bed and bank, restoring form and self-sustaining function to wider reaches. In complementary efforts, AsRA has replaced or retrofitted five undersized, high priority flood-prone culverts, assisting with the replacement of another three, and planted nearly 10,000 native trees and shrubs. With each project we learn new lessons, improve and refine methods, and work with a widening array of partners that share new skills and ideas. Our goal is to move beyond projects that are reactions to crisis, valuable though that capacity will remain, to establish comprehensive plans for the restoration of equilibrium to both the East and the West Branch Ausable River.

Every restoration project is unique. Symptoms, causes, and goals may vary, but Leopold's dictum provides a starting point for understanding. A stream must be in dynamic equilibrium to move both water and sediment efficiently. Where the transport of water to a stream, and then along its channel and floodplain, is efficient; and where the form of a channel is created and recreated by the water, sediment, and woody material moving through it, then temperature and oxygen regulation, and the processing of nutrients and organic matter, will also be efficient. These are the building blocks of aquatic and riparian life. They are essential to the cool, shaded streambanks, the clear, clean water, and the abundant native fish and wildlife that define our passion for the West Branch.

Standing on the newly constructed toe wood structure in the Dream Mile on a warm September day before sunset, I watched the flow of water moving through the restored channel. Amidst the intertwining submerged roots and large boulders of the toe wood, thousands of small fish congregated, exploring the windfall of new habitat. A muskrat probed an upstream bend and a kingfisher worked the opposite shore, emitting his high-pitched rattle. Near the center of the Culvert Pool a trout rose briefly. Restoring equilibrium and resilience is a wise investment.