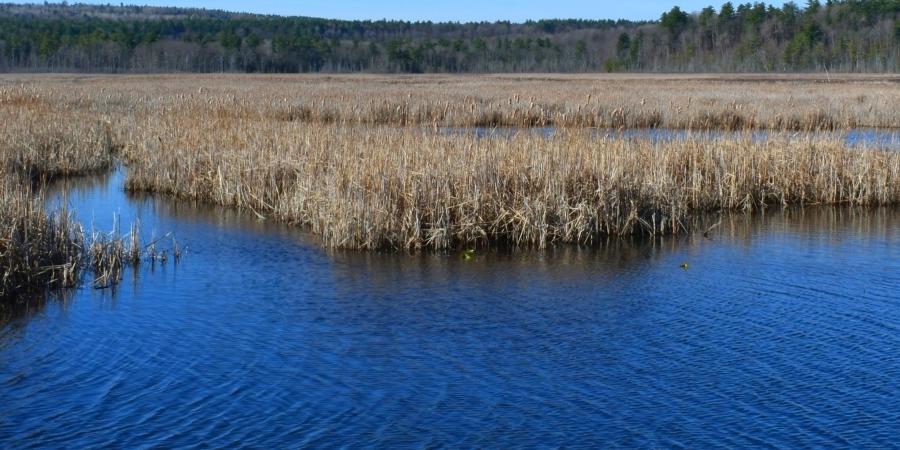 Piracy in the Ausable?

As the great ice sheet that once covered most of New York State retreated near the end of the Pleistocene Epoch, Lake Champlain's outlet to the north was still blocked by a glacier. Much of the Champlain Valley was under water until the present-day drainageways opened up and land surfaces rebounded to their current elevations. As water levels dropped in the valley, local rivers built deltas that, today, sit at higher elevations far from the modern lake shore. As the lake shoreline finally receded to its present position, the Ausable River was building a delta at Wickham Marsh. Then, something happened. Why did the Ausable River abandon its delta at Wickham Marsh and start building a new delta at Ausable Point? And what does any of this have to do with piracy?

Stream piracy (also known as stream capture) occurs when a river or stream is "captured" and diverted into the channel of a neighboring river. It is not uncommon in nature. For example, even the mighty Mississippi River would be a victim of piracy by the smaller Atchafalaya River were it not for the Old River Control Structure, a mammoth floodgate system costing hundreds of millions of dollars for construction, operation, and maintenance that keeps the Mississippi on its course to New Orleans.

The old channel used by the Ausable River to reach Wickham Marsh is easily seen on the shaded relief map below. A bedrock ledge (composed of the same rock formation seen in Ausable Chasm) just upstream of Wickham Marsh kept the river from cutting down to the level of the lake. At this point in time, the river was perched around 80 feet above its present-day channel as it wound its way south and, then, east to its former delta. Note the location of Dry Mill Brook near the point where the former channel diverges from the present one. 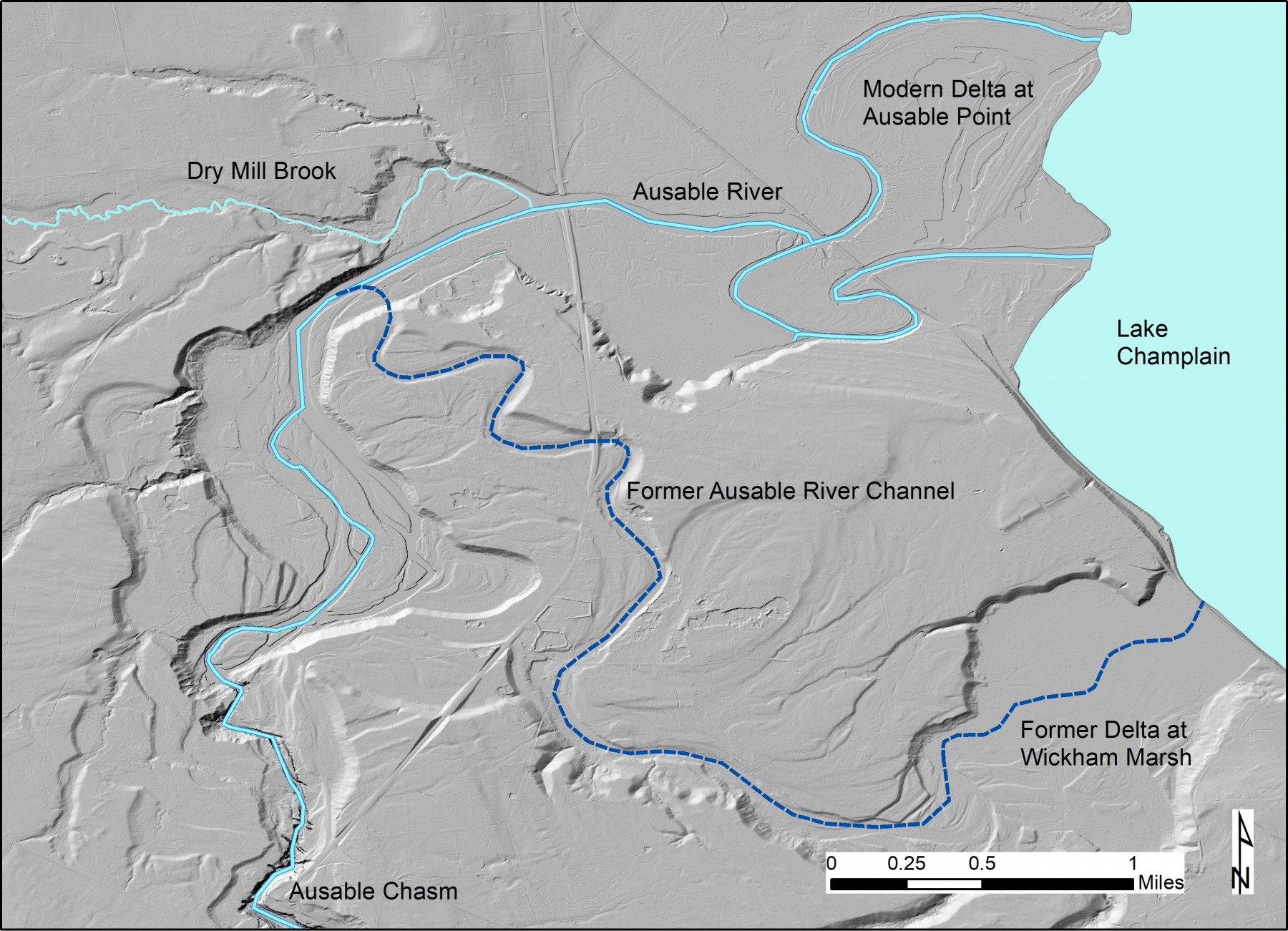 With the lake at or near its present elevation, Dry Mill Brook had cut a channel down to the lake and probably emptied near the present delta at Ausable Point. What happened next has been interpreted differently by scientists that have studied the post-glacial history of the Champlain Valley. Charles Denny (1974) suggested stream piracy by Dry Mill Brook as the main factor in the river’s course change. He postulated that a gully formed in the valley of Dry Mill Brook, which eventually cut into the Ausable River’s former channel and captured it. A more recent study by Franzi and others (2015) has concluded that channel avulsion was responsible for the course change. Avulsion is when a river breaches its banks to establish a new, steeper channel and typically occurs during flooding. However, the paper also suggests that headward erosion of gullies leading to Dry Mill Brook may have played a role.

Regardless of whether the Ausable River was a victim of piracy or not, the new channel was not subject to the bedrock control that kept it perched at a higher elevation and rapidly cut its way through the sediments associated with older deltas. It reworked those sediments to build a new delta at Ausable Point. Denny estimated that around 144 million cubic yards of sediment and rock were excavated by the river downstream of Rainbow Falls at Ausable Chasm to carve the new channel down to its present elevation.

When a river delta is abandoned, its sediment supply is cut off, and it begins sinking under its own weight as the sediments are compacted. Today, much of the former delta at Wickham Marsh is a low-lying wetland area with diverse habitat that supports a variety of fish and wildlife populations. The outline of the sunken delta offshore can be seen on the map below. 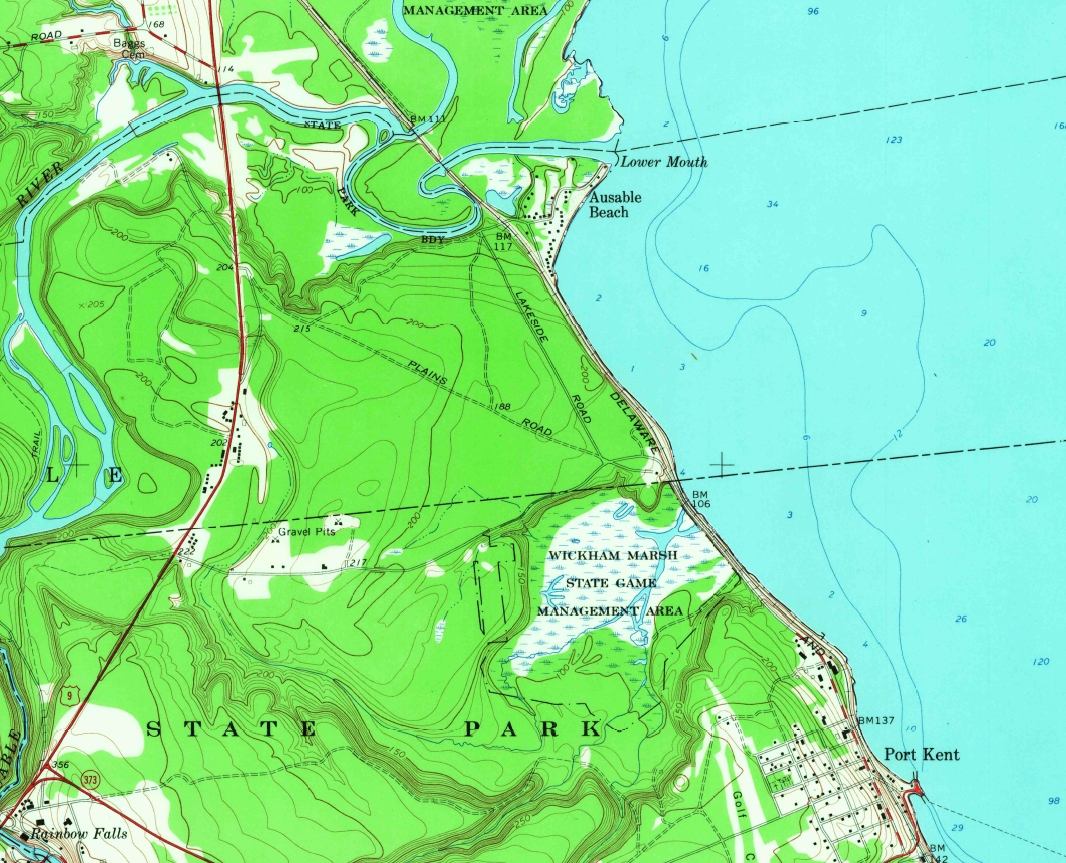 As a geologist with an active imagination, it is awe-inspiring and a bit frightening to stand in the channel upstream of the Carpenter’s Flats Bridge, looking at the bluffs that tower above you and thinking about that dark and stormy night, thousands of years ago, when the Ausable River burst out of its channel and came raging down into the valley of Dry Mill Brook. Whatever was blasted out of the landscape that fateful night is likely buried beneath the delta at Ausable Point. In the end, despite the destruction that followed the avulsion event, the river has built us a beautiful beach where we can relax in the summer sun, blissfully unaware of how this is all the product of a wild river, swollen with floodwater and ripping through the landscape on a mad dash to the lake. It makes a band of bloodthirsty pirates seems rather tame in comparison to that kind of destructive power. 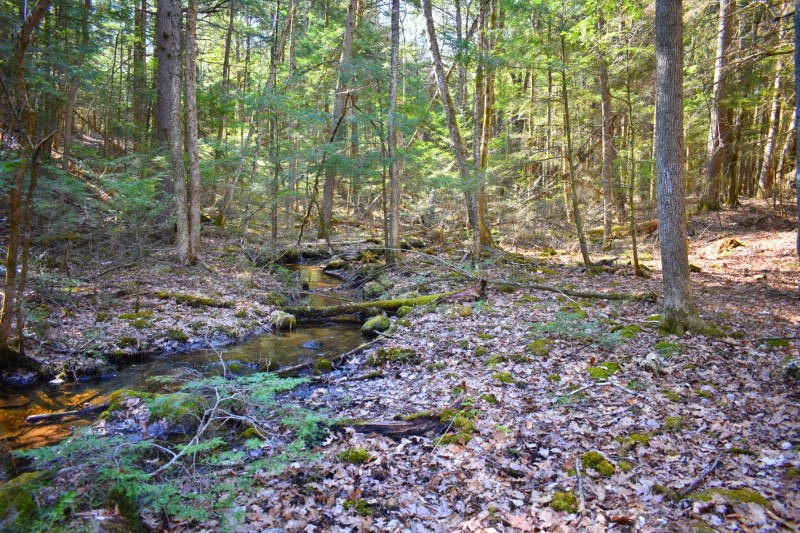 Today, a small creek drains into Wickham Marsh where the Ausable River once flowed. 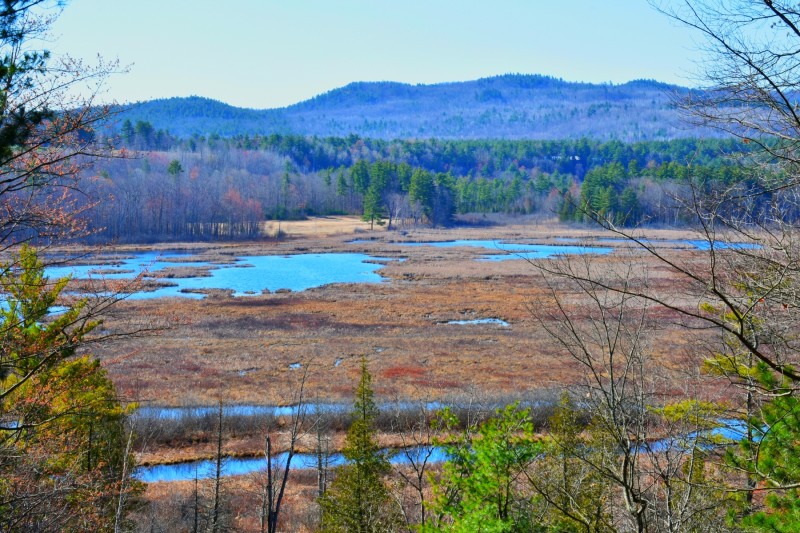 A view across Wickham Marsh from the observation platform. Trembleau Mountain looms over the marsh in the background. 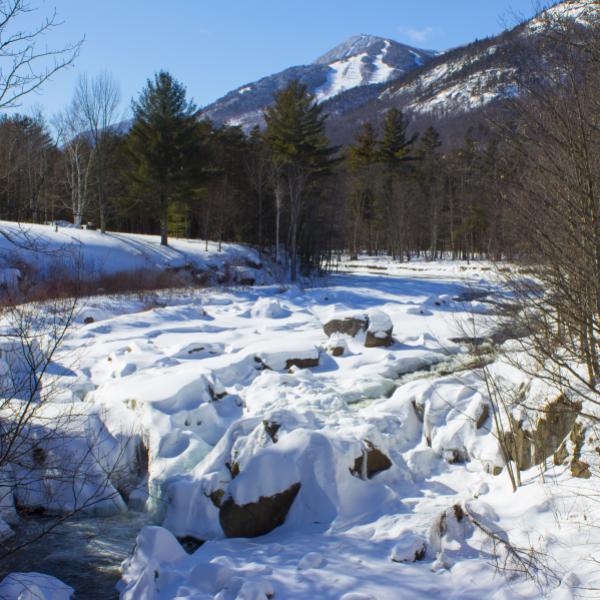 Business Partnership
Partner with the Ausable River Association and together we can enhance the health of the watershed where we live, work, and play.