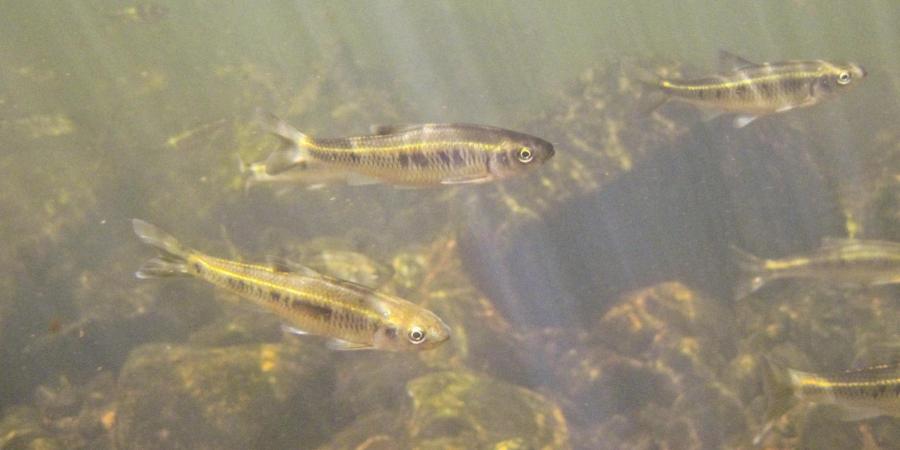 Who Lives In Your Watershed?

The Ausable watershed encompasses 512 square miles, 27 High Peaks, and includes 94 miles of river channel fed by more than 70 streams. It is home to over 20,000 human residents living primarily in settlements downstream of its protected headwaters. The watershed comprises a diversity of ecosystems, from the boreal wilderness of Mt. Marcy and the High Peaks, along the Sentinel and Giant Mountain Wildernesses, down to the lowland valley of Lake Champlain. This diversity of lush forest, fertile valleys, and protected wilderness creates extensive wildlife habitat that hosts a range of species: fisher, black bear, bobcat, snowshoe hare, ermine; palm warblers, Bicknell's thrush, rusty blackbirds, black-backed woodpecker, spruce grouse, and saw-whet owls; spotted salamanders, American toads and more. The diversity in aquatic habitats likewise allows for a range of aquatic species from zooplankton to macroinvertebrates to fishes.

The Ausable is home to more than 60 species of fish. They live in the streams, rivers, ponds, and lakes of the watershed – sometimes in the smallest trickle of water. Some are very specialized, requiring particular habitats, while others are more adaptable to a wide range of environmental conditions, and are thus found throughout the watershed. Let's take a closer look at four, two minnows and two larger fish species: pearl dace, longnose dace, creek chub, and white sucker.

All dace species are known for their small, fine scales, but the pearl dace can be recognized by the red band that forms along the lateral line in breeding males. Similar to creek chub and fallfish, they have smaller mouths, and lack a characteristic spot at the base of the dorsal fin, as in creek chub. A small minnow, their total length is 3-4 inches. They feed upon mostly insects, as well as mollusks and plants.

Pearl dace are widely distributed in Canada and the northern latitudes of the United States, and prefer habitats found in small lakes, cool ponds, and spring-fed creeks. They are spring breeders, establishing and defending a small streambed territory for wandering females to lay eggs in.

They are common in ponds, small lakes, bogs, and headwater streams, and are found in the headwater tributaries of the Ausable. This species is native to the Adirondacks and New York State.

Another minnow species widely distributed across central North America, longnose dace are similar in appearance to the more widely known eastern blacknose dace, except that, as their name suggests, they have a much longer nose, extending well beyond the sub-terminal mouth. They grow larger than blacknose dace, reaching up to five inches long, and can live up to five years.

An Adirondack native, these fish are common residents of fast-flowing small streams, and are adapted to be bottom-huggers in fast riffles or in wave-beaten rocky shorelines of lakes. Longnose dace feed primarily on insect larvae. They are voracious predators of black fly larvae, and have the potential to decrease black fly populations in spring.

Support our biodiverse habitats work for wildlife and their aquatic habitats. Give with confidence today!

Creek chub, another native fish of New York, are one of the most commonly caught minnows and are found in small to medium sized streams. They are very similar to pearl dace, but can grow much larger, up to 10 inches or more. Both creek chub and pearl dace share a characteristic barbel (whisker) between their upper jaw and snout, and creek chub have larger mouths than pearl dace. It’s easy to tell you’re looking at a creek chub by pulling up the dorsal fin and looking for the dark spot at the base of it.

These fish are omnivorous, eating insects and lots of plant material. They are capable of dispersing throughout watersheds, and are found in trout streams and warmer water bodies. They are one of the few native New York fish to be able to reach high elevation headwater areas.

White sucker may be the most commonly caught stream fish in the Northeast. That’s due in part to the fact that they are one of the most common fish found in streams and lakes, constituting an incredible proportion of biomass in regional waters. They are gray to brown in color, and have an elongated body type similar to a trout. They can grow up to 20 inches long and weigh up to 4 pounds, with an average lifespan of 8-10 years of age, with the oldest recorded specimen living 18 years!

Though they are rumored to eat trout and salmon eggs, there is little evidence of this in the wild, and instead white suckers consume mostly insects, crayfish, snails, and clams. They are not the vacuum cleaners we think they are, but are rather selective in what they choose to eat.

In April and May, white suckers move into fast moving streams at night to mate and spawn on gravel areas. Large females can lay up to 140,000 eggs in one season, and the eggs adhere to small rocks until the fry hatch 5-10 days later. There are two similar species in New York state, one described, summer sucker (Catostomus utawana) and another not yet described and still under study, little white sucker (Catostomus spp.). The latter species/sub-species occurs in Upper and Lower Ausable Lake, while the former is found in the Raquette/St. Lawrence watershed. These are smaller-bodied, headwater forms of White Sucker, and are documented to spawn later in the season and to reach sexual maturity at a smaller size. Both of these are recognized as Species of Greatest Conservation Need by the NYSDEC, a designation that provides incentives for their protection.

Find out more about native fishes in the informative guide: Freshwater Fishes of the Northeastern United States by Robert Werner (2004).

Story by Carrianne Pershyn, Biodiversity Research Manager. Top photo from the National Park Service - River, Trails, and Conservation Assistance program.
Sign-up for our e-newsletter to get weekly updates on the latest stories from the Ausable River Association.