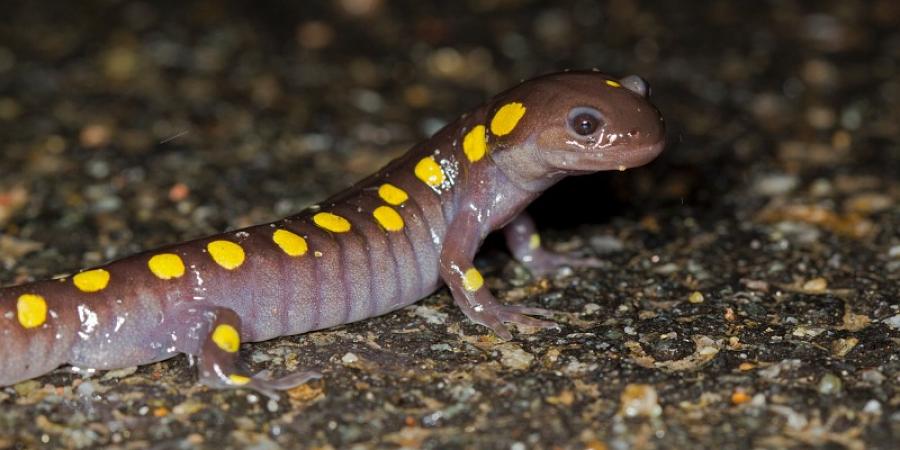 The Ausable watershed is home to a diverse array of amphibians, including frogs, toads, and salamanders, and, though they may not be thought of as terrestrial animals, many spend most of their adult lives in the woods and waterway edges. Some utilize water for mating, egg laying, and juvenile development. In spring, on wet rainy nights, many species are on the move in large numbers migrating to vernal pools, ponds, and streams to mate with others. On these, 'big nights', you may see hundreds or thousands of frogs and salamanders on the roads. It is important to drive carefully on these warm rainy nights, or better yet, avoid unnecessary travel altogether.

Frogs and toads use vocalizations to find other members of their species at these breeding areas. Learn how to identify them by sight and sound here.

Salamanders don't vocalize but we can rely on visual cues to identify them. Take some time to learn these and you'll know who is sharing the pond and streambanks in the evenings. First, we'll look at the two salamanders who may be travelling by roadway or streambank to reach their breeding areas and find mates. Then we'll look at two lungless salamanders who spend much of their time in and around water. 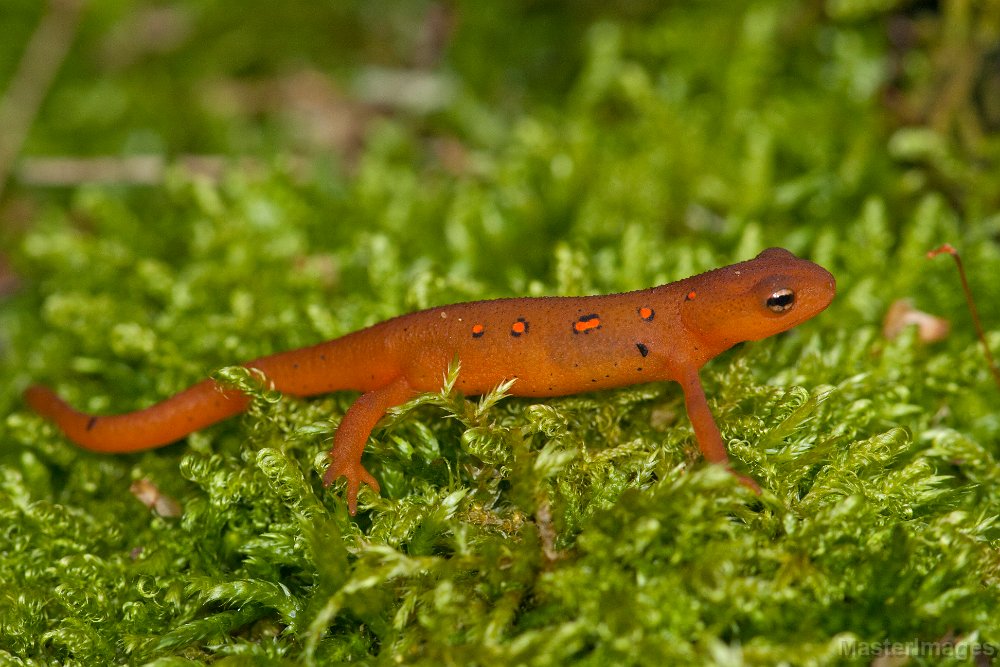 Many of you have probably seen the Eastern Newt (Notophthalmus viridescens) while hiking, fishing, or playing with children near streams. Some of you may know them as a Red Eft. These salamanders have two distinct life stages. The eft stage of the Eastern Newt is the juvenile, terrestrial form. They inhabit moist forest floors and are often found at varying elevations.

When they are fully mature, at about 2 to 3 years, they migrate to the stream, beaver pond, or vernal pool where they were hatched to find a mate. When they arrive, they undergo a transformation to their aquatic adult stage. Their color changes from orange to green, but their feet become webbed, they regain the ability to breathe underwater, and their tail turns back into a tadpole-like tail for enhanced swimming abilities. They enter the water to breed and lay eggs, which later hatch into a tadpole form of this salamander. They retain their red spots along their back during this time. Eastern Newts are carnivorous and live on a diet of insects and small crustaceans. Adults produce 200-375 eggs over the course of a breeding season and wrap each egg individually in living or dead leaves underwater. The eggs incubate for about a month, then live as tadpoles in the pond for 3 to 5 months before emerging as terrestrial efts. Adults in ponds can grow to 5 inches or more and they can live up to 15 years. Their skin contains a neurotoxin that wards off most predators including crayfish, birds, and most mammals, but racoons are their most common predators. 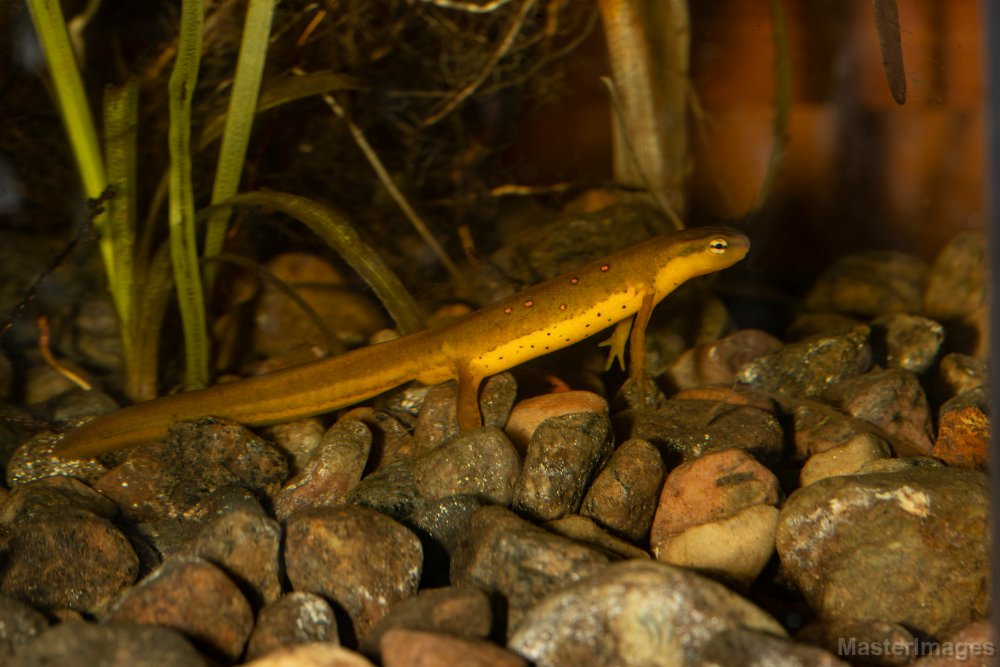 The Spotted Salamander (Ambystoma maculatum) spends most of its time buried in leaf litter on forest floors or in underground tunnels but is often found with other migrating wood frogs, spring peepers, and toads on those warm rainy 'big nights', migrating to vernal breeding pools, preferably without fish. After 4 to 7 weeks, the eggs hatch and the tadpoles have red feathery gills and front legs only. After 3 to 5 months, they transform into a terrestrial form and move from pond to forest. This salamander can grow up to 10 inches long, and its long stout body is a dark blue to purplish-black in color and is covered in two rows of bright orange or yellow spots along its back and tail. They typically lay about 200 eggs and in our northern latitudes, it can take from 3 to 7 years before they become sexually mature. Spotted Salamanders can also release a mildly toxic substance when threatened by predators, and have been known to live to between 20 and 30 years of age. They eat insects, earthworms, and smaller salamanders. 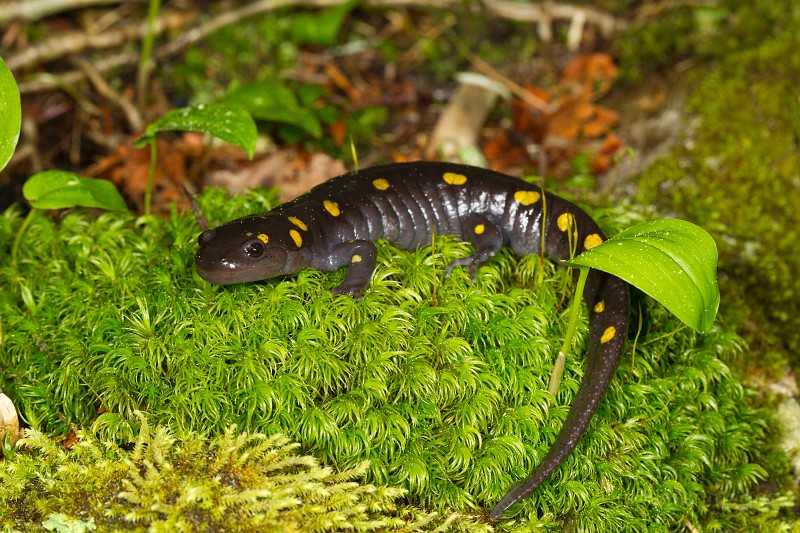 Help us protect habitats and ecosystems fostering native plant and animal species in and alongside streams, lakes, and wetlands. Give with confidence today!

Spring Salamanders (Gyrinophilus porphyriticus) are one of the largest of the lungless salamanders and more elusive in nature. They do not have lungs and need to absorb oxygen through their moist skin. Therefore, these salamanders are semi-aquatic and live most of their lives in or very close to water, especially cold springs. Young salamanders are more purple in color, and adults grow to about 8 inches long. As per the photo below, they have a stout orange-red to coral pink body with a prominent keel on their tails that enable a strong swimming ability. They live in forest and wet stream habitats, and find mates and lay eggs in late fall and early winter. Like the other salamanders, they eat crustaceans, earthworms, and small frogs and salamanders. This species relies on intact riparian habitats with many shade trees and is threatened by sedimentation and upstream development. 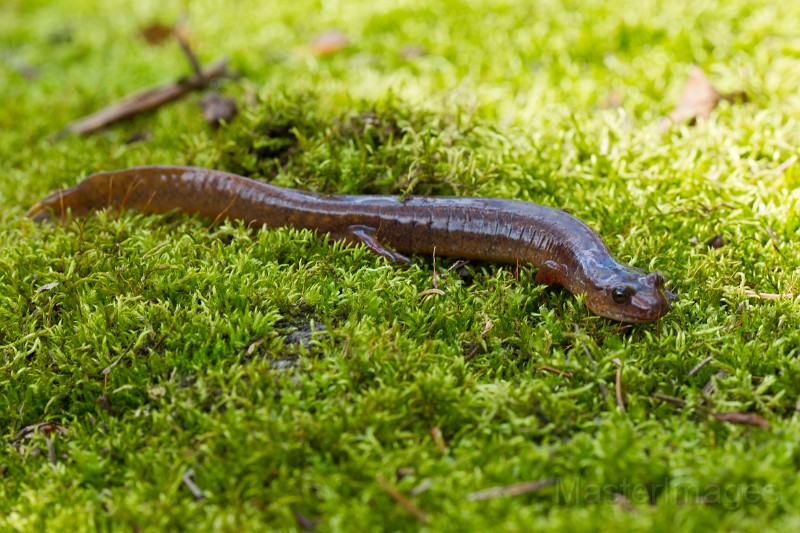 We have another species of lungless salamander that lives in the Adirondacks and Ausable River watershed. Pictured below, the Northern Two-Lined salamander (Eurycea bislineata) can grow from 2.5 to 5 inches long and is yellowish to red with a yellow underbelly. Young and adults have a characteristic stripe from their head to tail, with outer narrow, dark, solid lines and black dots or dashes between the two lines. Adults spend much of their time in the forest on and under leaf litter and near running water for much of their life. This salamander also lacks lungs and requires moist skin to be able to perform respiration. Northern Two-Lined salamanders become sexually mature at one year from metamorphosis, and their breeding season can last from October to May. Females lay their eggs in clutches of 15 to 100 eggs on the underside of rocks in streams and rivers. Females guard eggs and eat little during this period, which can take up to 8 weeks. Juveniles stay in the water for up to three years before emerging as semi-terrestrial adults. Adults eat mayflies, beetles, and spiders. When threatened by a predator, Northern Two-Lined salamanders have the ability to drop their tail, which continues to move on the ground while they flee to safety. 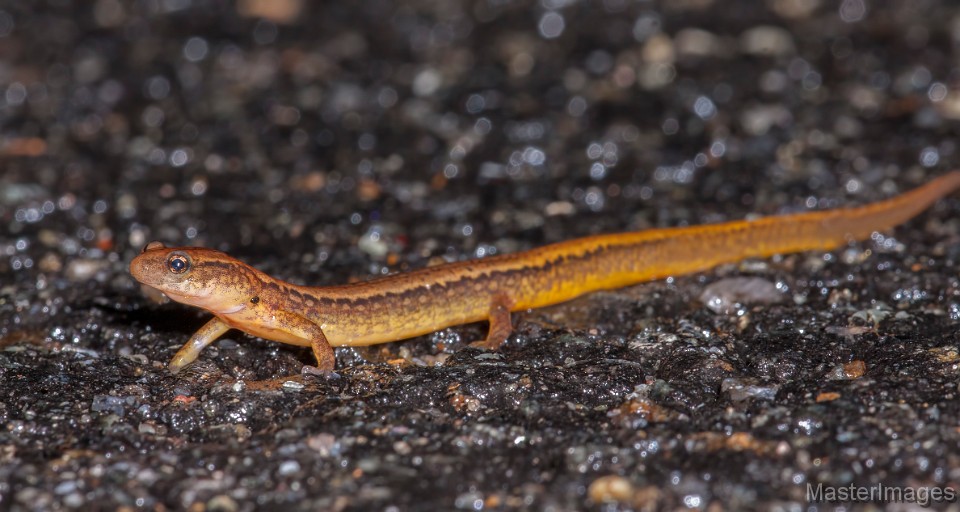