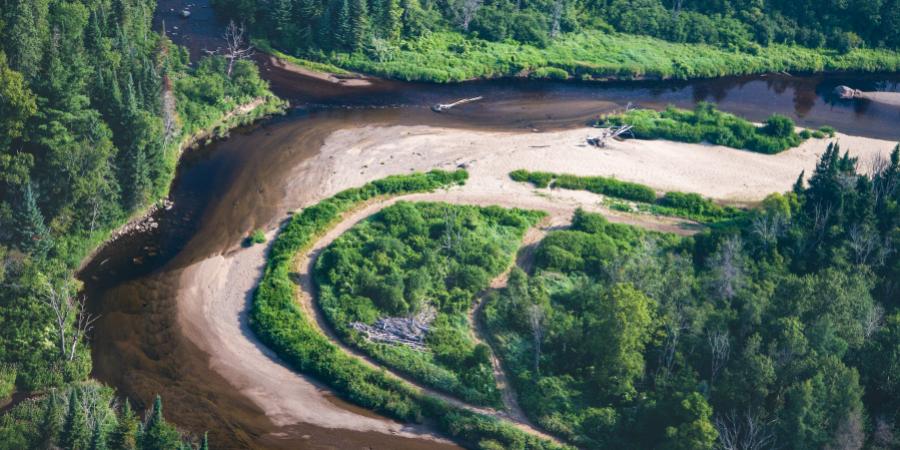 Where the Forest Meets the Stream

Humans like to name and sort things into patterns that are replicable and logical. In the scientific world, we have adopted the habit of naming and sorting all living creatures into Kingdom, Phylum, Class, Order, Family, Genus, and Species. These taxonomic rankings allow us to compare creatures big and small, to parse out who's different, and to learn how each evolved and branched off from one another in the great tree of living history. Biology studies organisms alone, including their physiology, behavior, anatomy, origin, and global distribution. When a few biologists decided that it was more fruitful to study organisms and the way they interact with or are impacted by other organisms or their environments, the study of ecology was born. Growing into a new field of science in the latter half of the 20th century, ecology sorted groupings of species and their particular environments into ecosystems. It is the study of the relations of organisms to each other and to their physical surroundings. Most carefully studied within the field of ecology is the study of food webs, or who eats who and the transfer of energy throughout an ecosystem.

At the Ausable River Association, we focus our ecological studies of the river on two ecosystems: the forest, or riparian, ecosystem and the stream ecosystem. In the forest, our work focuses on ensuring that we are planting native species of trees and shrubs to create a buffer of riparian vegetation next to the river or to a stream restoration project we have just completed. These buffers ensure that banks are stabilized with intertwining roots and that non-native species don't get a chance to colonize. Buffers between farm fields or mowed lawns and the river protect against soil erosion and improve water quality by providing filtration. In the stream or river ecosystem, we work to understand which groupings of fish species live where and the myriad species of aquatic insects they depend upon as a primary food source. We work to make our stream restoration projects fit into this world and ensure that our designs offer a great variety of habitats for fish, insects, and amphibians. Ah, but amphibians? Amphibians tread the line between ecosystems; many rely on both the forest ecosystem and the stream ecosystem to complete their life cycle. That challenges us to think differently about the connections between the two. 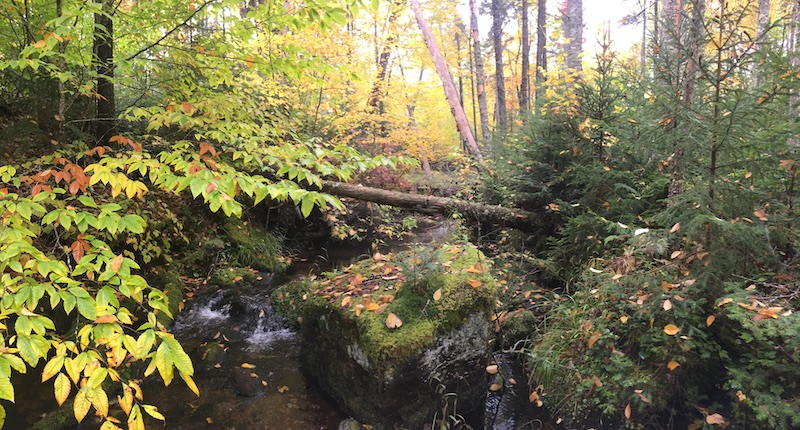 More and more, our research is showing that the interface between forest and stream ecosystems, so often treated separately, is critical to the health of both. In order for trout to thrive, they need suitable underwater habitat, including cool temperatures, a variety of aquatic insects and small fish to eat, and areas of cover to hide from predators and from high flows. The best fish habitats have healthy adjoining forests or riparian buffers. These serve to shade the stream and cool water. When a strong riparian buffer is established, a double bonus comes in the form of excellent habitat for birds, pollinating insects, and habitat for more mammals and amphibians. But it goes further. 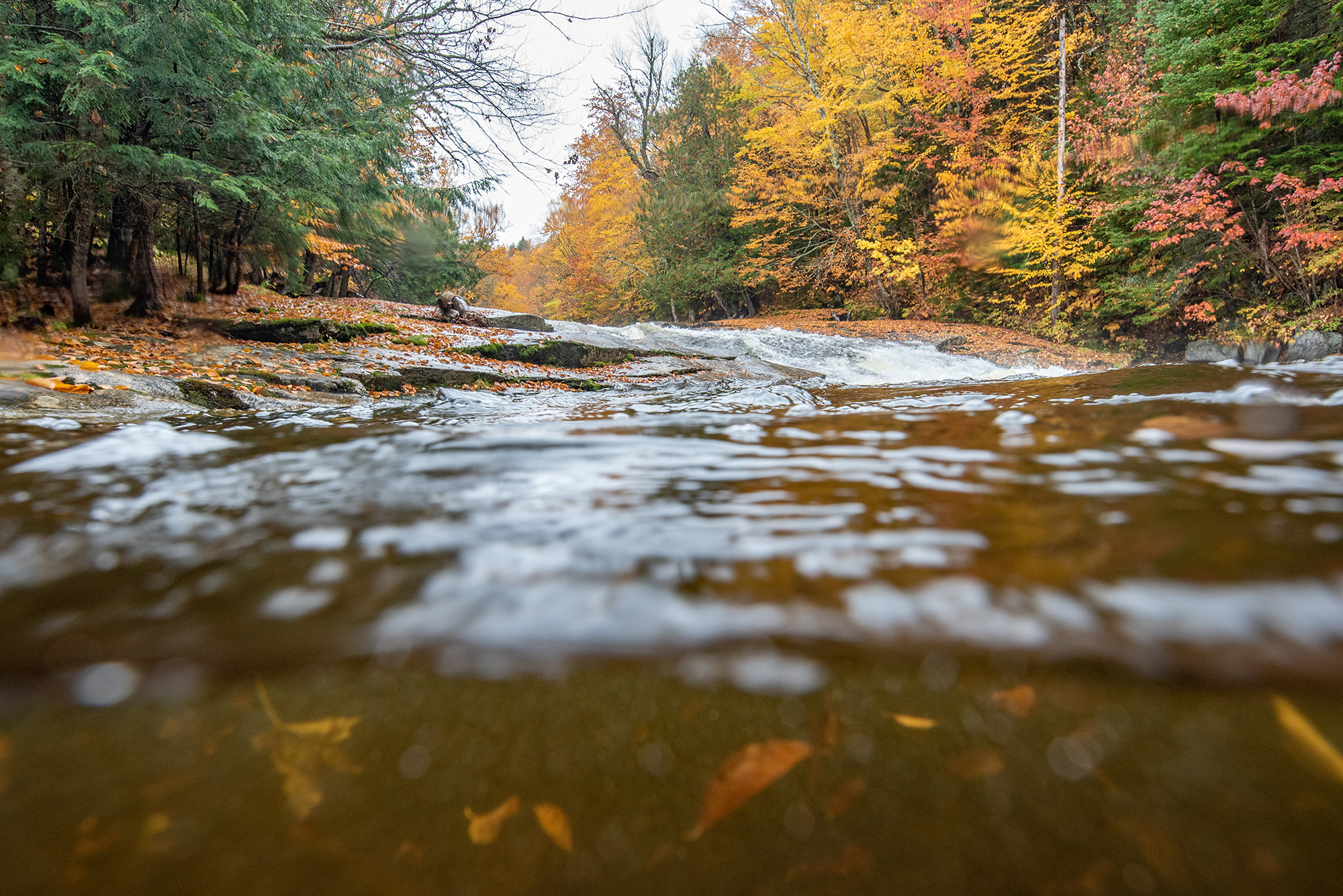 The interface between forest and stream is critical to the success of each ecosystem. Here, fall leaves provide a rush of nutrients to the stream as food for insects and bacteria. Photo credit: Brendan Wiltse Photography

While the interface between adjoining ecosystems has largely been ignored, it was meticulously studied by a few ecologists. Trout in streams depend not only on the aquatic insects that inhabit the underwater rock crevices, logs, leaf packs, and woody debris; in some cases, up to 50% of a trout's diet depends on inputs from the terrestrial realm. These include spiders, bees, beetles, and caterpillars that fall from the branches and land on the surface of the water. In some months, they can make up almost 100% of the diet of stream trout. A stream with robust forest cover and insect life increases the food supply so much that it can support more and larger trout, or trout of different species.

Much of this research was done in the late 1990s and early 2000s by the Japanese ecologist Shigeru Nakano on trout streams in Hokkaido and by a prominent fish biologist at Colorado State University, Kurt Fausch. (For more, see the Freshwaters Illustrated documentary "Riverwebs" or the book For the Love of Rivers by Kurt Fausch). The research Mary Power is doing at UC Berkeley concerning the effects of the physical environment on river food webs continues this line of thought. Shigeru Nakano spent hundreds of hours snorkeling in Japanese trout streams and watched as insects fell into the river. When one non-native trout species was present, he found that species was able to catch falling terrestrial insects more effectively than the native trout. Instead of competing with the non-native species for this robust food source, the native species switched to feeding on smaller drifting insects. Because they chose to occupy a different niche in the stream, the native trout were able to occupy the same habitat as larger, non-native trout. In streams where the non-native species was not present, the native trout fed primarily on falling terrestrial insects. This led Nakano to consider the focal role the terrestrial ecosystem plays in the stream ecosystem and how alterations to the terrestrial ecosystem (such as cutting it down) might result in stark changes to the food web. It wasn't until Nakano's students and Fausch chose to stretch a large net across the top of a whole stream section to exclude all the terrestrial insects that they demonstrated the true impact of this interface between ecosystems. Over half of the trout left that stream section because food sources were so greatly reduced. 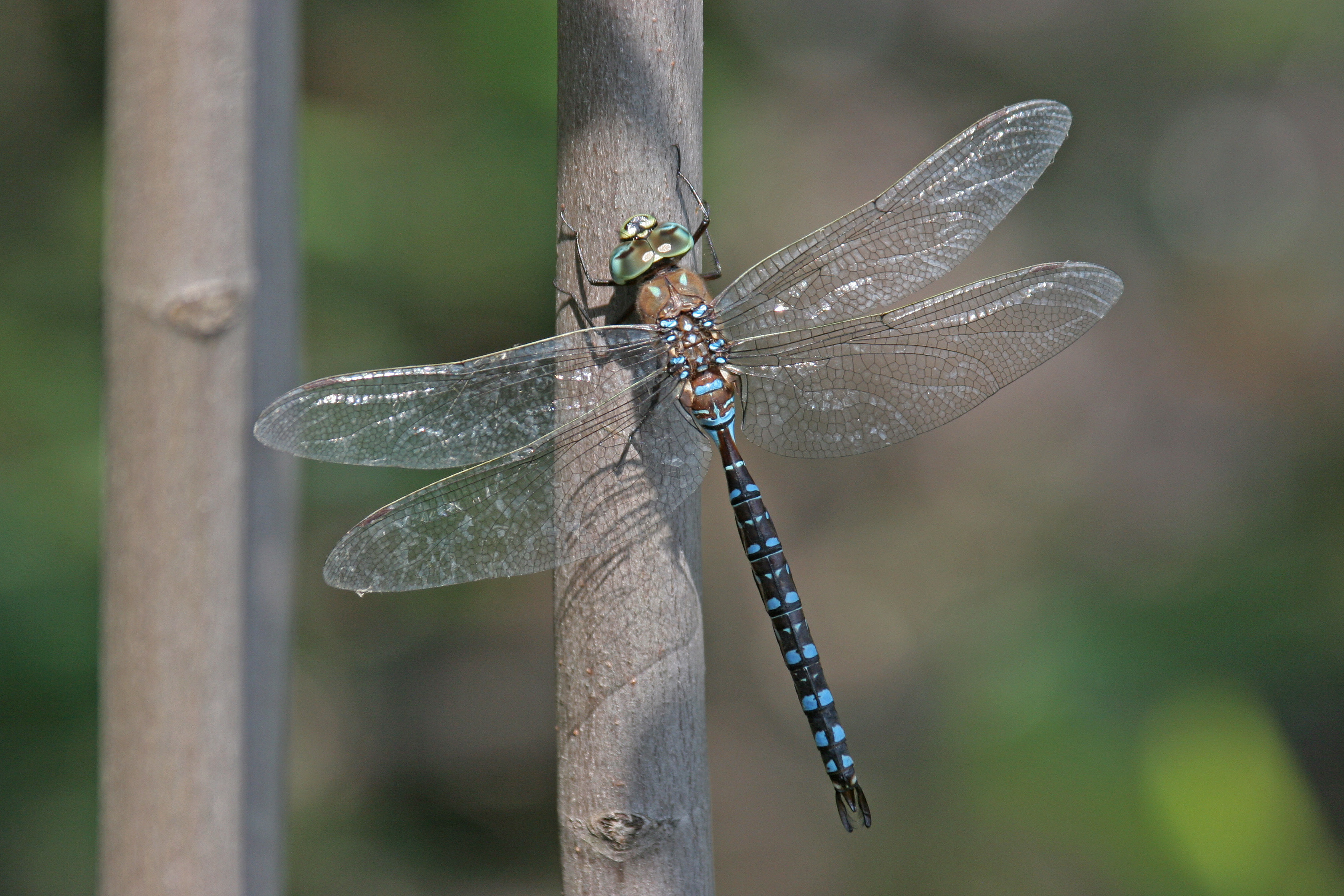 Dragonflies, like this variable darner, are food for fish and terrestrial birds and mammals. Photo credit: Larry Master, masterimages.org

Even more incredible is the extent to which terrestrial wildlife, such as spiders, amphibians, bats, and migrating songbirds, rely on food produced by aquatic insects that turn into adults and fly into the terrestrial realm. When these insects were prevented from emerging from the stream by the same net that was designed to keep terrestrial insects out, many spiders chose to leave the area because their food sources had become so limited. The same might be expected for birds, frogs, and bats. This experiment led trout to eat a majority of the aquatic insects, which left very few to eat the algae, and caused tremendous growth in algae. This represents a shift in the entire food chain, and mimics what would likely happen in a stream if the riparian buffer of trees and shrubs were cut down. The scientists were running a parallel experiment without nets but with non-native fish. The addition of non-native trout caused a strikingly similar shift in the food chain. The non-native trout ate all of the terrestrial insects, and the native trout switched to eating the aquatic insects only, which led to algae blooms.

Support our work to monitor the health of our waterways; we share what we learn with our community to find practical solutions to ongoing threats. Give with confidence today!

I studied this research over the past five years, as I spent hours along the banks of many of the Ausable's 90 tributary streams. I keep thinking about what it means for our local ecosystems. I've watched insects that fall into the brook from nearby branches instantly devoured by waiting trout. I'm sure we could investigate the stomach contents of our trout and understand how large a role terrestrial insects play in their diet for much of the year. And I've seen birds migrating through the Adirondacks from parts north, stopping here to glean insects from branches and spiderwebs. Last year, I spent nearly an hour watching cedar waxwings gobble up mayflies and stoneflies that had just hatched and dried their wings to take their mating flights. Recently, I got to witness the streams brought up by recent rains carrying a whole new crop of fallen leaves, which will become one of the foremost annual inputs of nutrients to our river and streams as they are devoured by hungry aquatic insects and bacteria. 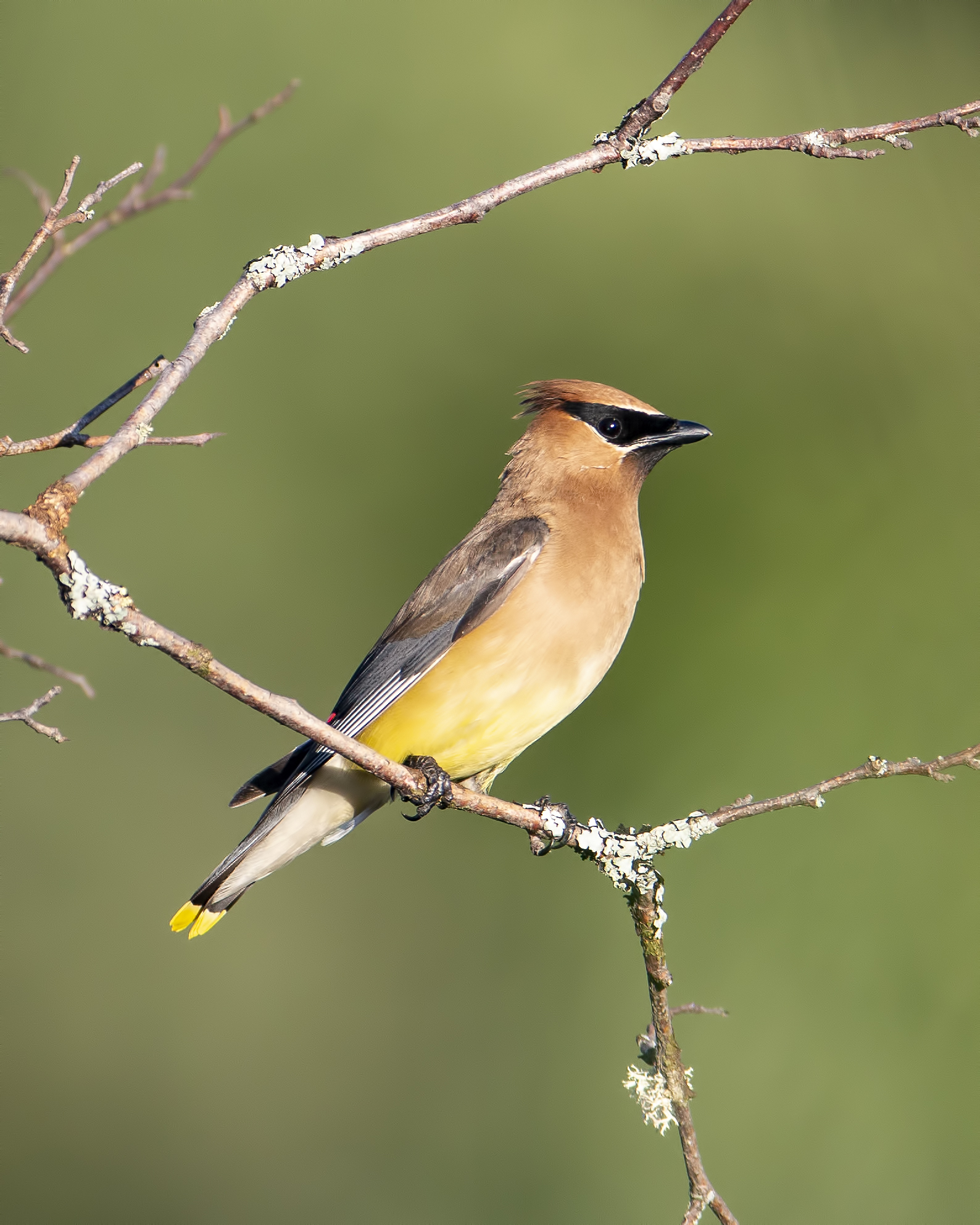 Cedar waxwings are one of many bird species that feast on emerging aquatic insects. Photo credit: Larry Master, masterimages.org

I am beginning to understand how important it is for the stream habitat to be healthy enough to support trout and all the aquatic insects they depend on, but also to support the terrestrial wildlife that relies on this important food source. We need to make sure the riparian habitat --the streamside forest, shrubs, grasses, and plants -- can support a diversity of native wildlife from insects to birds to mammals.

And this is how it all comes together for me. I spent half of this year ensuring that we are planting trees and shrubs species that are not only native but carefully selected to be appropriate for the habitats we're planting them in. I am working to build banks of hardy shrubs that could be damaged by winter ice and yet return, year after year, to provide that habitat and hold banks together. We are planting for erosion control, invasive species prevention, and to help the fish. I spent the other half of my field season monitoring water quality in the streams and river, mapping the distribution of different trout species in the watershed using environmental DNA, and brainstorming how our stream restoration projects can ensure we are creating the best possible habitat for fish. 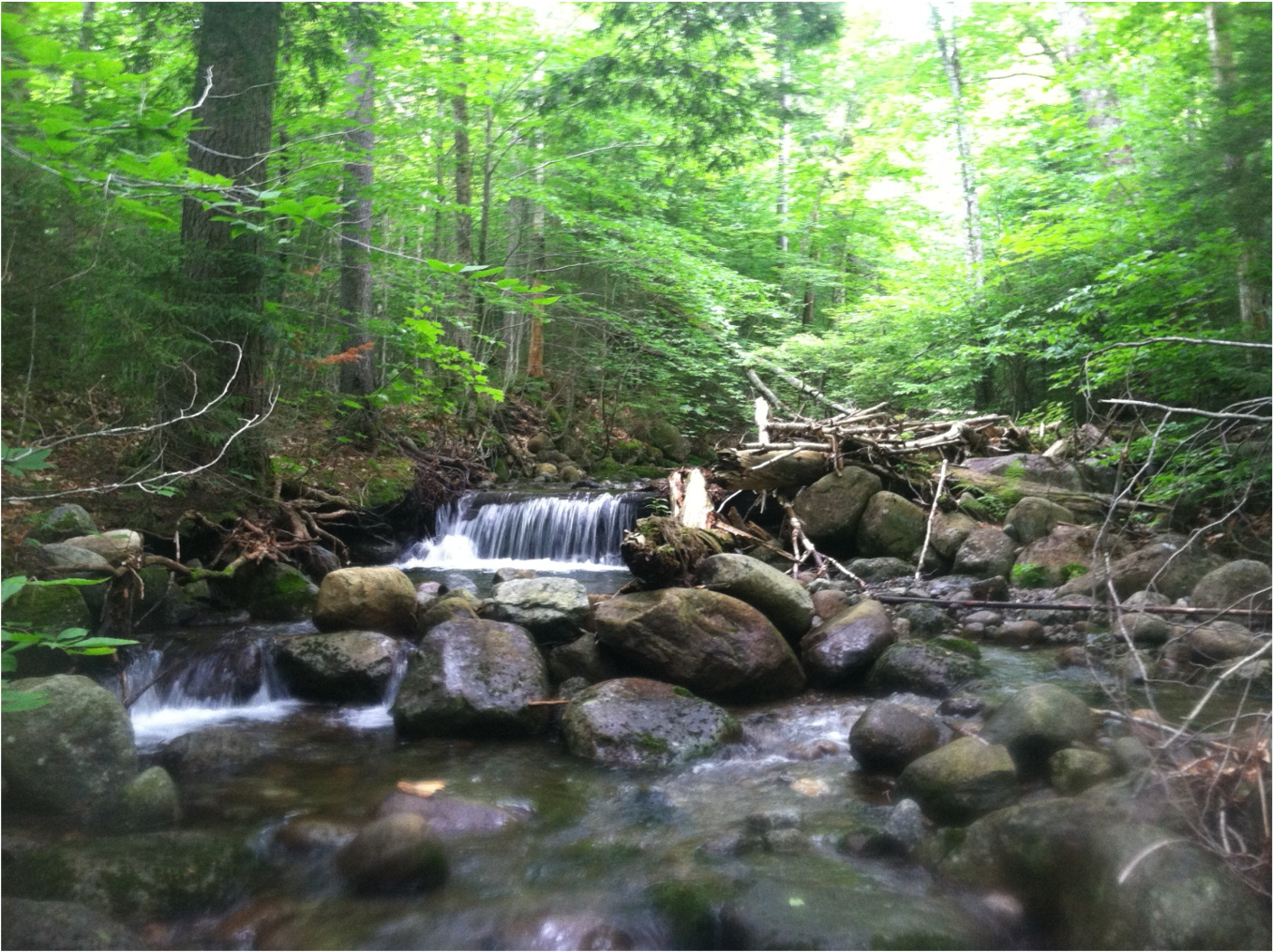 We've begun to synthesize our programs to make the best possible outcome for our biota. All of our work has multiple benefits for wildlife and all our ecosystems. Yes, it is important to have vegetated streambanks for bank stabilization, but an additional outcome is that we are providing habitat for pollinators. We are also ensuring native species can grow here and not leave space for invasive plant species to colonize. These robustly vegetated banks also provide shade onto the water, lowering stream temperatures. This leads to a reduction in thermal stress for the fish that live there. If, in our stream restoration work, we are building the best possible fish habitat and following that by building the best riparian buffer we can, this synthesis can result in increased biodiversity. The next step is to incorporate all of our research on clean water, healthy streams, and biodiverse habitats and synthesize these so that our efforts complement each other and help the watershed. 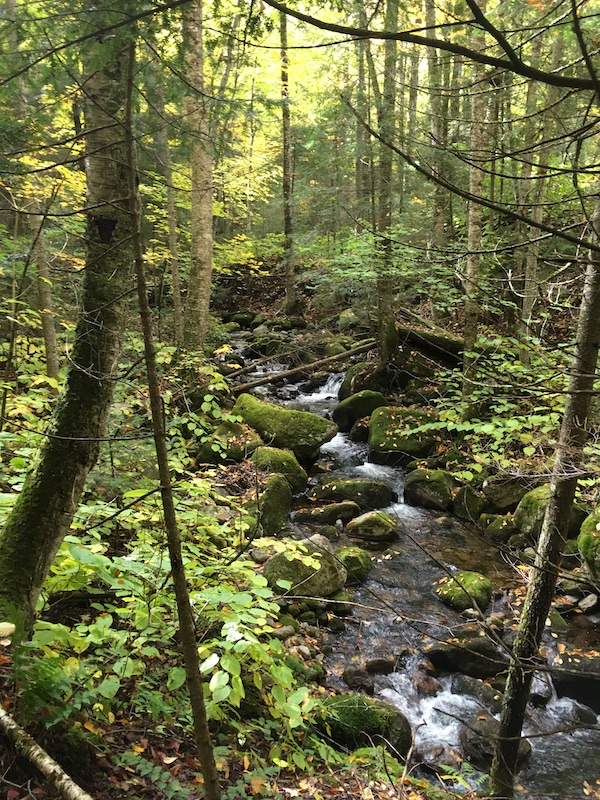 If our planting work can help spiders catch emerging aquatic insects and later fall to feed a trout, and our in-stream restoration work creates a variety of habitats for aquatic insects so they can emerge and feed spiders, birds, and trout along the way, we will have succeeded. We envision a future in which AsRA works as seamlessly as this river web, in the water and on land. We are more than excited about the changes to come and look forward to working with you to support these intricate connections, in our work and in our world.

View Recent Posts
Our mission — is to help communities protect our streams and lakes.

Join Us
Join AsRA in our efforts to protect the Ausable.
Website Development by