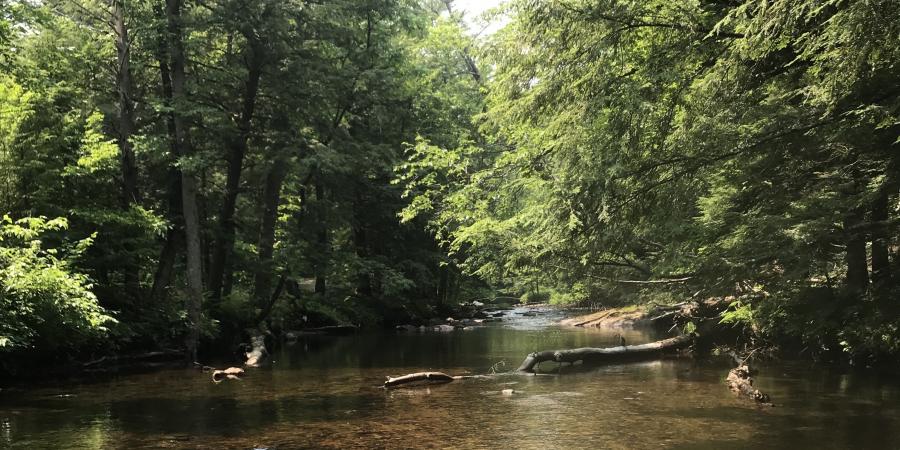 What is Hemlock Woolly Adelgid?

A Hemlock woolly adelgid (HWA) is a tiny insect that feeds, develops, and reproduces on hemlock trees. While they inhabit all hemlock species, they only attack Carolina and Eastern Hemlocks. There are two generations of HWA each year. Eggs laid in the spring develop into crawlers. This is the only mobile stage of HWA. They either crawl along the branch, get blown by the wind, or get transported by birds or other animals. If they remain on or are transported to a hemlock tree, they find a place to settle on the underside of a branch, usually at the base of a needle, and insert their mouthpart. After they have inserted their mouthparts, they can no longer move; this is where they will spend the rest of their lives. They are inactive during the summer, waiting until the fall and winter to feed, grow, and produce wool. It is this wool that makes them visible without magnification. In early spring, the HWA lay eggs creating a second generation that quickly matures and lays eggs of their own, continuing the cycle. In the Eastern US, all HWA are females that reproduce asexually, meaning just one HWA can produce a new population.

How do HWA Damage Hemlock Trees?

HWA insert their mouthparts into the twig to feed on the starch reserves of the hemlock. This, however, is not what kills the hemlock tree. Each time a HWA inserts their mouthpart into the branch, it damages the tree. The tree walls off this part of the branch, creating scar tissue. This is the strategy trees use anytime they are damaged. This doesn’t hurt the tree but when hundreds and thousands of HWA penetrate the trees’ branches, so much scar tissue builds up that the tree is unable to get nutrients and water out to the end of the branches to be able to grow new foliage. Without new foliage, the tree is unable to collect energy from the sun to create food. The tree will begin to starve, resulting in a decline in tree health and eventual mortality of the tree, generally within 4 to 10 years. 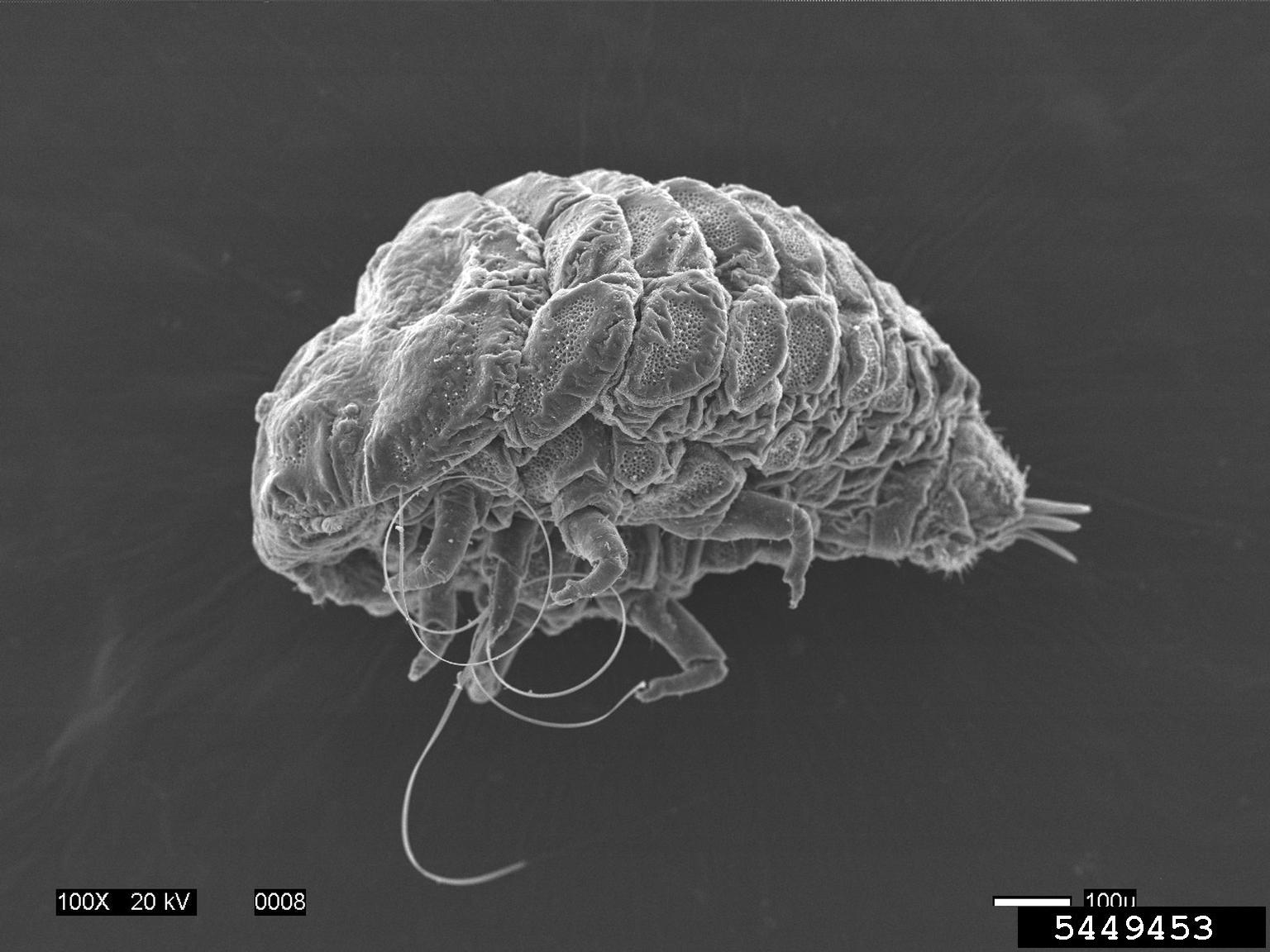 Close-up of Hemlock woolly adelgid and mouthpart used to penetrate branch of Hemlock tree to feed. Photo by Kelvin Tryon.

How is HWA a Threat to the Adirondacks?

The obvious threat of HWA is the loss of Eastern Hemlock trees. Unfortunately, the threat is larger than the loss of one species. Eastern Hemlock is the third most abundant tree species throughout New York State. It is a foundation species that greatly influences the ecosystems it is a part of. Under its canopy in the summer, air temperatures can be 10 degrees Centigrade cooler, and, in the winter, the canopy keeps temperatures warmer. Because of this, hemlocks provide a refuge for wildlife like deer and moose in both seasons. Not only terrestrial species benefit from hemlocks however. Eastern hemlocks are found along the banks of many of our streams and rivers. Their extensive root systems stabilize streambanks, reducing erosion and sedimentation, and their cooling canopy also shades the stream keeping water temperatures cooler. The loss of this species has implications for entire forest and aquatic ecosystems. If Eastern Hemlocks are lost, other important Adirondack species, such as brook trout, could be greatly challenged, or lost as well.

Support our biodiverse habitats work for wildlife and their aquatic and near-stream habitats. Give with confidence today!

Where is Hemlock Wooly Adelgid Found?

Hemlock wooly adelgid, (HWA) is native to Asia and the Pacific Northwest but has spread beyond its native region. In eastern North America, where it is an invasive insect, HWA is found as far south as Georgia and Alabama, as far west as Michigan and as far north as Novia Scotia. HWA was first discovered in New York in 1985. In 2017, HWA was identified in the Adirondack Park in the Town of Lake George. Since then, there have been several other locations in the Lake George region where HWA have been found. The Ausable River Association and regional partners like the Adirondack Park Invasive Plant Program (APIPP) are working with citizen scientists to monitor the spread in Adirondack forests.

How do you get rid of Hemlock Wooly Adelgid?

There are currently two biological controls being researched in New York. These are Laricobius beetles and Leucopis silver flies. If the research determines that these two insect predators of HWA will be successful at controlling the spread of HWA, they will be strategically released throughout the region and start working for us. Because the research and approval process for biological controls includes long trial periods, there is still a lot of work to be done before we can count on these biological controls. They do however provide hope that we can find a tool to save Eastern hemlock from HWA. 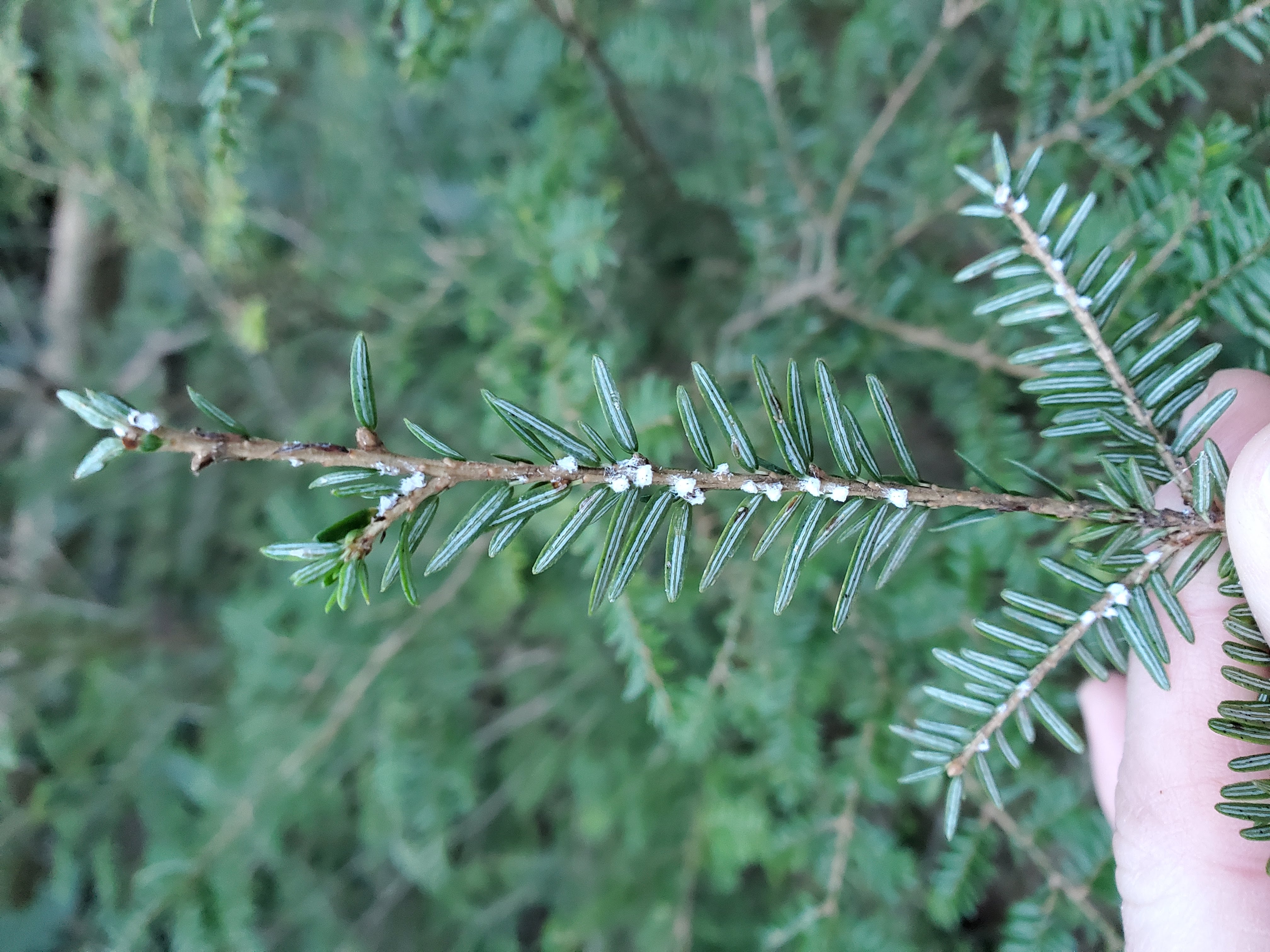 Hemlock woolly adelgid found on the underside of a branch during a December survey in Central Pennsylvania.

What can I do about Hemlock Wooly Adelgid?

For HWA, as well as all invasive species, early detection is key. You, citizens of the Ausable watershed and beyond, can play a very important role in the management of HWA by using local firewood, shopping at local nurseries, and volunteering to survey for HWA.

Ausable River Association staff are teaming up with APIPP this winter to survey for HWA in our region. We will be offering a field trip in the Ausable watershed to train you how to look for HWA on your own. If you’d like to volunteer or want more guidance, reach out to us at liz@ ausableriver.org.