Our long-term vision is two-fold: first, in the face of changing climate to create flood resilience in our communities; and second, to increase habitat potential and stabilize/decrease temperatures on the East Branch so that it – along with its abundant cold-water tributaries – support wild fish populations, with native brook trout as the flagship species.

In recent years, the Ausable River Association (AsRA) has advanced several significant natural channel design stream restoration projects in the Ausable River watershed (e.g. Dream Mile, Rocky Branch). Our work relies on a restoration partnership with the US Fish and Wildlife Service (FWS) and the Adirondack Chapter of Trout Unlimited and engages other project specific partners (e.g. landowners, towns, contractors, soil and water conservation districts, New York State agencies) as needed. As our technical expertise has increased and as we have learned more about the needs of the river, our goals have shifted from resolving isolated problems to establishing and implementing comprehensive plans for the restoration of equilibrium to both the East and the West Branch Ausable River.

Banks can be stabilized, and habitat improved in pockets as opportunities, funding, or emergencies arise, but this reactive approach has its limits. Equilibrium for the Ausable River's East and West Branches – with minimized damage in storms, lower long-term costs for towns, informed engagement from landowners and the public, and fewer interventions needed by state and federal agencies – can most economically, efficiently, and effectively be achieved with a comprehensive plan that starts with the science of rivers, their hydrology, hydraulics, geomorphology, biologic, and physicochemical needs. AsRA is pursuing a multi-year effort with the goal of restoring geomorphic equilibrium and habitat diversity and we're starting with the East Branch. Our long-term vision is two-fold: first, in the face of changing climate to create flood resilience in our communities; and second, to increase habitat potential and stabilize/decrease temperatures on the East Branch so that it – along with its abundant cold-water tributaries –  support wild fish populations, with native brook trout as the flagship species.

AsRA's goal received a significant boost last year when the Town of Jay – home to the downstream half of the East Branch – allocated $1.1 million of funding from the Governor's Office of Storm Recovery (GOSR) to the creation of an East Branch Restoration Program. AsRA organized the team that successfully bid for the project. Team members include: Ecosystem Planning and Restoration of Maryland, Fitzgerald Environmental Associates (EPR), from Vermont, and Schoder Rivers Associates, P.C.. Erik Sandblom of Schoder Rivers is the team leader.

The team's assessment and data-driven design plan follows the "Function-Based Framework for Stream Assessment and Restoration Projects" (Harman et al., 2012). This document is founded on the premise of a hierarchal relationship of five river functions where lower-level functions support higher-level functions and that all are influenced by local geology and climate, which underlies a Stream Function Pyramid (image below). The Pyramid consists of five categories that evaluate river functions: hydrology, hydraulics, geomorphology, physicochemical, and biology. The stacked pyramid framework identifies a "drilling down" approach that allows more detailed forms of analysis and quantification of river functions. A series of function-based assessment parameters describe and support the functions in each category. A menu of measurement methods, specific tools, equations, assessment methods, etc., are then used to quantify each function-based parameter. 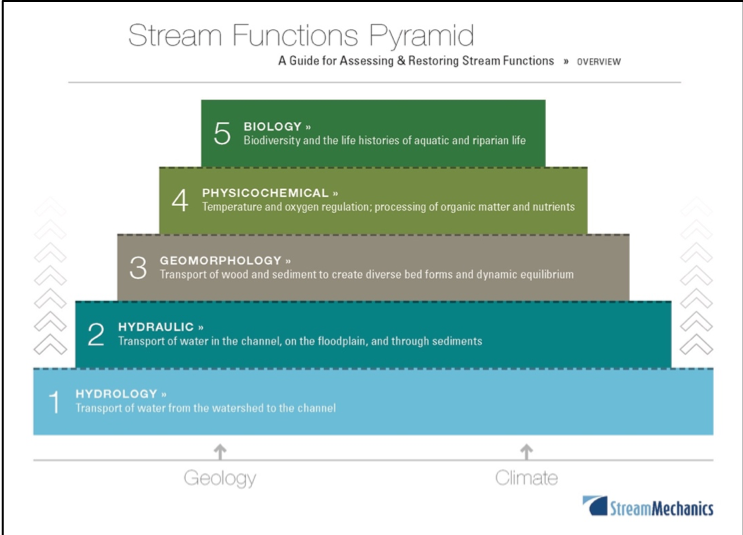 With this information, the team identified all potential problem and opportunity areas which became the focus of concentrated field assessment. The 2018 reach level field assessment conducted by EPR, FWS, and AsRA included 13 distinct stream assessment reaches within the East Branch project area. The following assessment parameters, listed below by pyramid level, were evaluated. Assessment parameters were numerically scored to provide an objective measure of current conditions and potential uplift at each level of the Stream Functions Pyramid, described previously. From the individual pyramid level assessments, an overall function-based condition was then assigned to each assessment reach.

Six of the 13 projects (see the design maps for the six here) have been elevated to the conceptual design phase and GOSR funds will cover implementation of one to two of the prioritized projects.

Read the team's final report at this Dropbox link.

Membership
Join AsRA in our efforts to protect the Ausable.