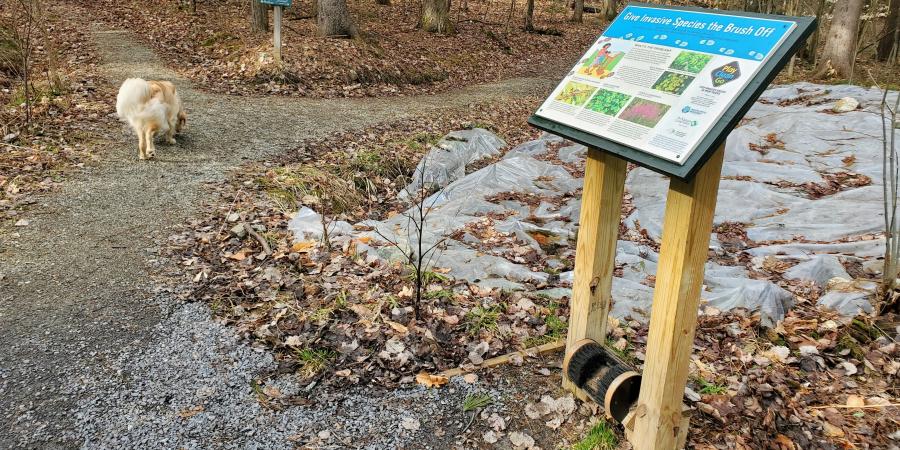 Give Invasive Species the Brush Off

Invasive species pose a threat to the Ausable River watershed and Adirondack Park as a whole. They threaten natural ecosystems, recreation, and local economies. This region is known for its beautiful landscapes and natural areas that are easily accessible by both roads and trails. Visitors come from all over the country to enjoy all the Adirondacks has to offer from peaks to ponds. Across the park, between mud season and leaf-peeping season the trailheads are full of visitors and locals alike. Increased human traffic, however, can increase pressures on these systems. Invasive species can be spread through natural pathways such as wind, currents, and animals, but this spread can be severely expedited by human pathways. Programs are in place throughout the Adirondacks that, properly and frequently used, help slow the spread of aquatic invasive species. Wader wash stations and boat inspection and decontamination stations are just two examples of options available; and state regulations limit firewood transport to help prevent terrestrial invasive species spread around campgrounds. But fewer measures are in place to prevent the spread of invasives on trails and into some of the most pristine backcountry areas via hiking boots and gear. The solution? Boot brush stations are becoming an increasingly popular way to combat terrestrial invasive species spread into these areas. 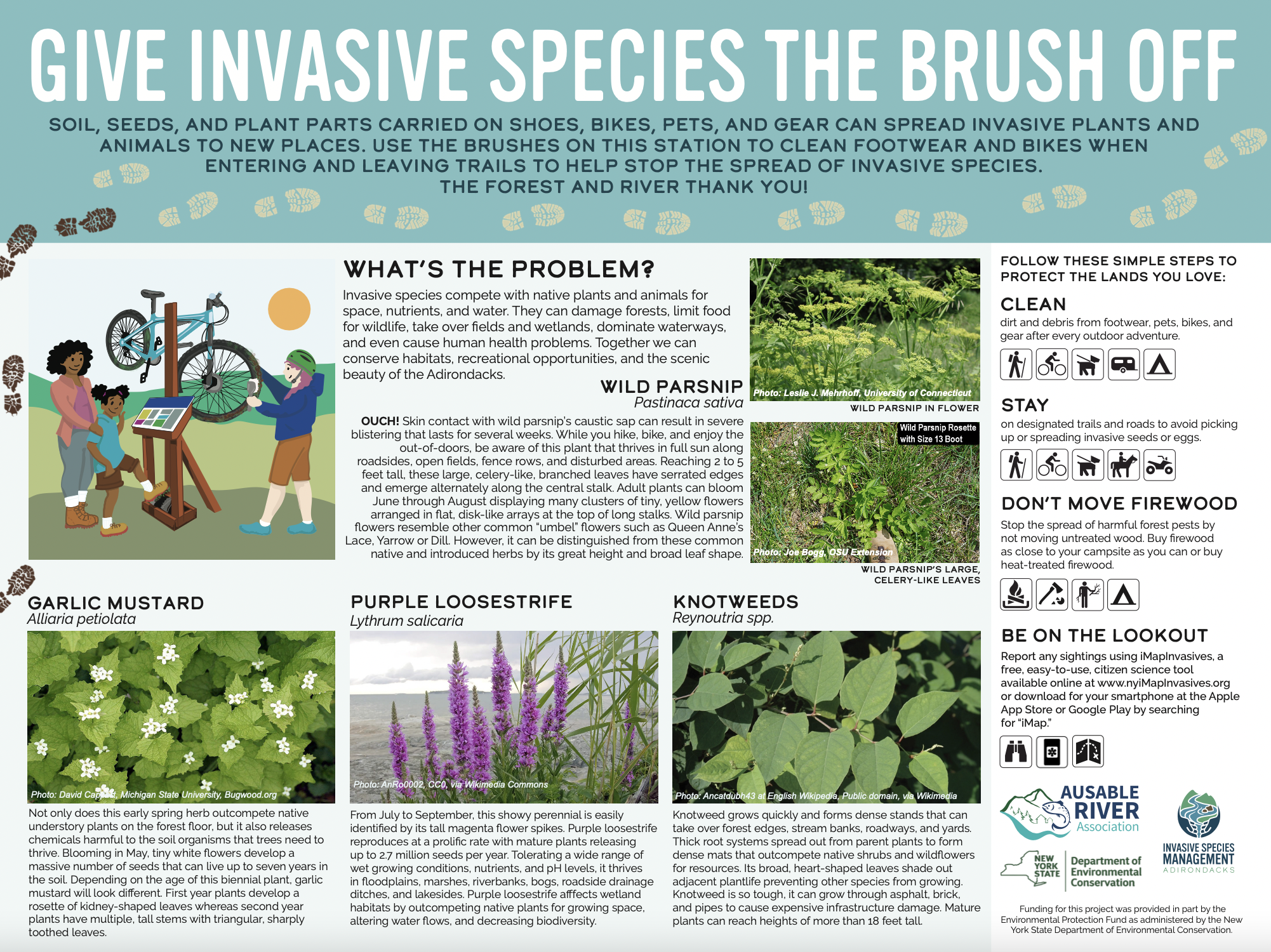 The sign for the combination boot and bike brush station to be installed at the Flume Trailhead. Like hiking boots, bike tires can collect dirt containing plant and animal parts that, when not properly cleaned, can spread invasive species onto trails.

What is a boot brush station?

Boot brush stations prevent the spread of invasive species and provide an opportunity to educate hikers. Users are encouraged to use the brush portion of the station to clean mud, dirt, and debris off their hiking boots while reading the attached sign to learn about nearby invasive species. These stations are usually installed at trailheads so hikers can clean their boots before they head out on the trail and when they return.

How do boot brush stations prevent the spread of invasive species?

Boot brush stations provide a convenient way to clean dirt and debris off boots at trailheads. While it makes sense to clean off your boots before going into a house, it may not seem as important to clean them off before going onto a dirt trail. Unlike your house, however, the dirt is not the concern here. It is what the dirt may contain. Seeds, plant parts, and even animal eggs can get caught in the mud in the treads of your hiking shoes or in the fabric sides. As the mud falls out along the next trail you head out on, you are also leaving behind that other debris that could contain parts of invasive species. By cleaning your boots, bike tires, and companion animals at the trailhead you are leaving that debris there where it can easily be managed.

Support our biodiverse habitats work for wildlife and their habitats. Give with confidence today! 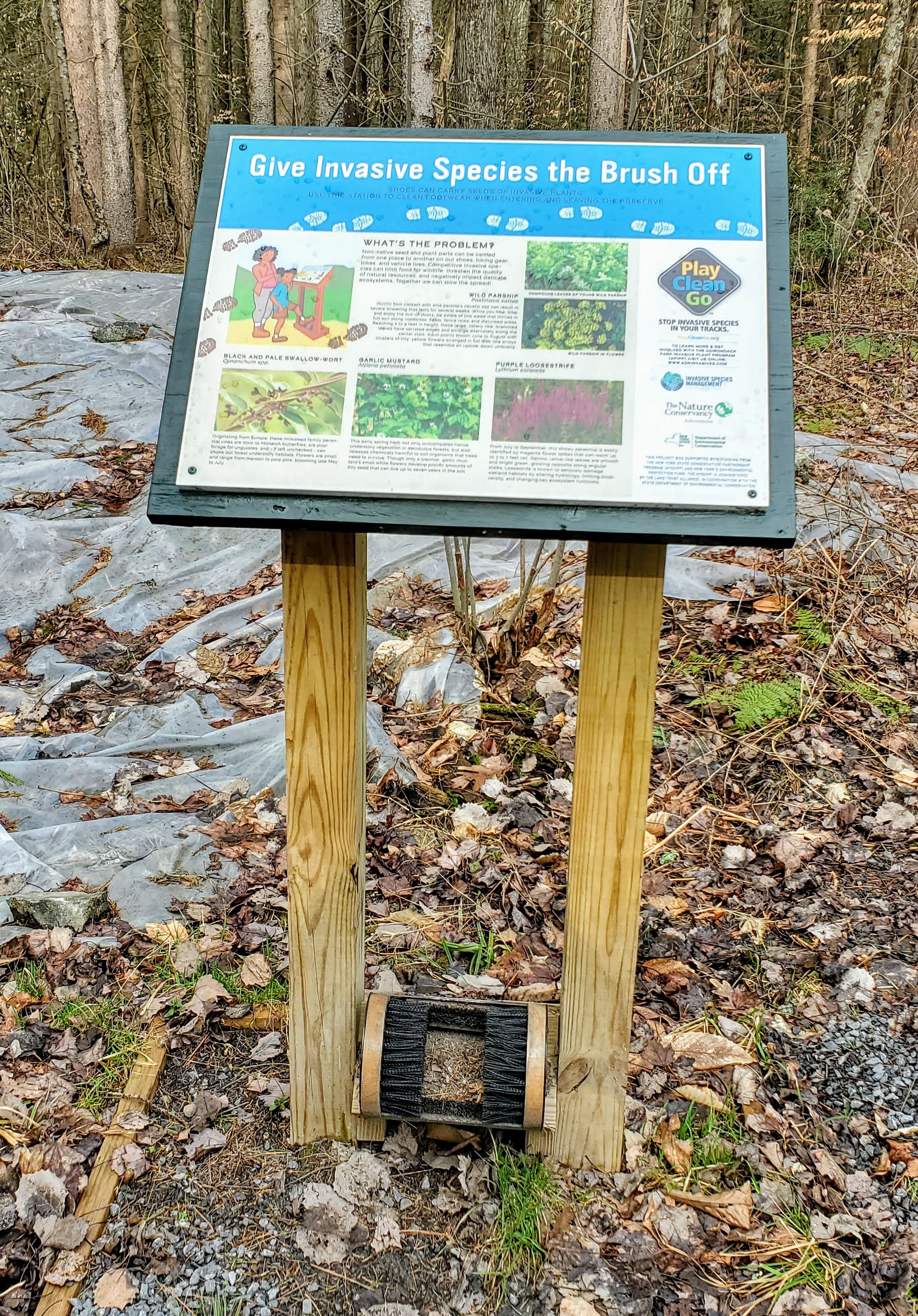 The boot brush station at the Coon Mountain Preserve trailhead.

Where can I find a boot brush station?

The Ausable River Association, in partnership with the NYS Department of Environmental Conservation and Adirondack Park Invasive Plant Program, is installing two boot/bike brush stations in the Ausable River watershed this Spring. One boot brush station will be located at the Connery Pond trailhead while a combination boot and bike brush station will be at the Flume trailhead. These are the first stations on public land in the region. Other boot brush stations installed by partner organizations can be found at the Silver Lake Bog, Boquet River and Coon Mountain Nature Preserves. We plan to continue to expand this network as early as this fall.

What else can I do to help stop the spread of invasive species?

There are many ways that people unintentionally spread terrestrial invasive species, but there are a few easy things to keep in mind to prevent it. Don’t move firewood, shop at local nurseries and green houses, and plant native species in your garden. Remember to keep an eye out for a boot brush station on your next hike and give invasive species the brush off.