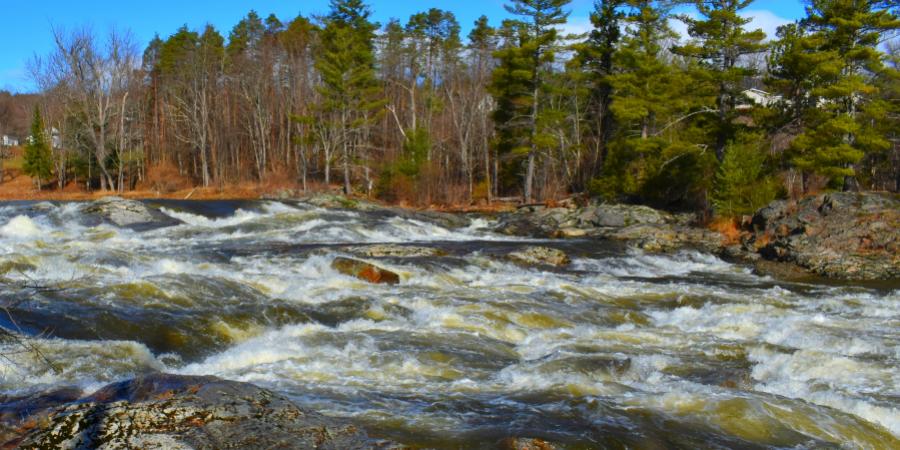 What is a Water Year?

Hydrologists measure time differently than the standard January-to-December calendar year. For those of us that model and track the movement of water through the landscape, the year begins on October 1st and ends on September 30th. This is known as a water year. The concept is based on the fact that precipitation falling in the latter part of a calendar year may not drain out of a watershed until the following spring. The diagram below is called a hydrograph and shows discharge (i.e., flow) in the East Branch Ausable River for the 2020 water year (water years are named after the calendar year in which they end). 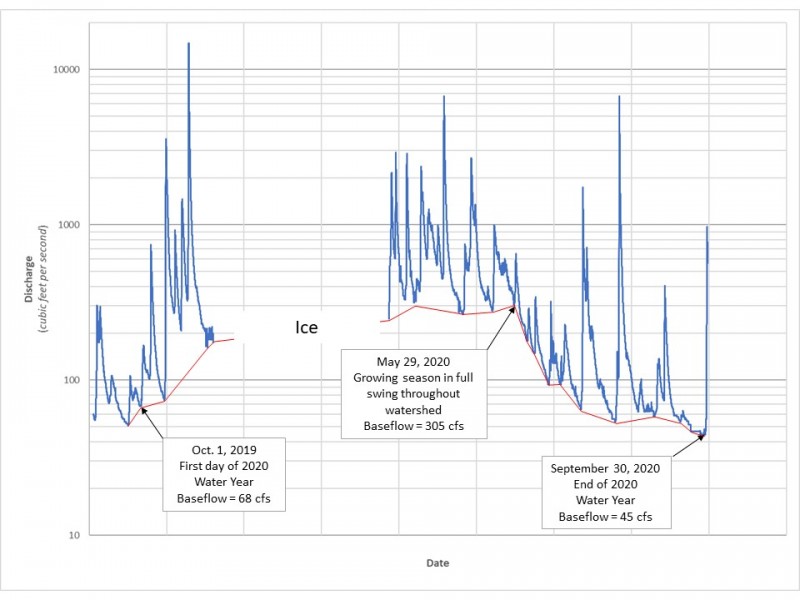 A hydrograph showing discharge in the East Branch Ausable River for the 2020 water year. Discharge is expressed in
cubic feet per second (cfs). The red line represents the contribution of baseflow to the river's discharge.

October 1st is generally the time of year when baseflow is at its lowest point. Baseflow is the reason that the larger rivers in our region have flowing water throughout the year, even when it has not rained in weeks. On the diagram, baseflow is shown by the red line connecting the troughs between spikes in discharge. Notice how the red line rises from October until spring, at which point it falls through the end of the water year. The spikes on the graph are due to either rainfall or snowmelt (or both), depending on the time of year. The river never runs dry, but baseflow decreases throughout the warmer months of the year. So, where does baseflow come from, and why does it fluctuate?

Baseflow is the result of shallow groundwater discharging directly to the river in places where the river channel sits below the elevation of the water table (see diagram below). The water table tends to be at its highest in the spring and begins declining through the summer and early fall. Perhaps you have noticed that groundwater seeps (also known as springs) are more prevalent in the springtime and may dry up completely as the water table falls and no longer intersects the ground surface (this is what we call “mud season” in the Adirondacks). Much of this is driven by another key process in the hydrologic cycle – evapotranspiration. Evapotranspiration is combination of two terms: evaporation and transpiration, both of which result in the transfer of water vapor to the atmosphere. Plants are responsible for transpiration. During the growing season, they can withdraw shallow groundwater and prevent infiltrating rainwater from recharging the shallow groundwater reserves. In addition to transpiration, the leafy tree canopy in summer intercepts significant amounts of rainfall, limiting infiltration to the soil. Over the course of late spring to early fall, less shallow groundwater is available to the river as baseflow, and the discharge between rain events gets lower and lower until the plants go dormant for the winter. When transpiration ends and the leaves fall, shallow groundwater begins recharging, and the cycle continues.

Cross-sectional view of an idealized river valley. The channel intersects the water table and receives direct discharge from saturated layers of rock and/or sediment. The shallow groundwater flow is driven by gravity as it slowly drains out of a watershed. The higher elevation areas  of the watershed will drain out first, with many  mountain streams going dry in summer. Lower elevation areas in the main river valley will continue to receive groundwater discharges throughout the year.

The exact timing of the seasonal fluctuations in river discharge varies from region to region and even from year to year within regions. Although it has a foundation in hydrology, October 1st is an arbitrary date selected by the U.S. Geological Survey (USGS) to standardize the reporting of water statistics in their publications. The USGS operates a nationwide system of instruments to monitor discharge in rivers and issues comprehensive reports on the use of water resources in the U.S., among other reports on water availability, water quality, etc.. Beyond its utility in reporting, the water year is also a valuable concept utilized in water resource management applications, such as drought forecasting and computer simulations of watershed processes.