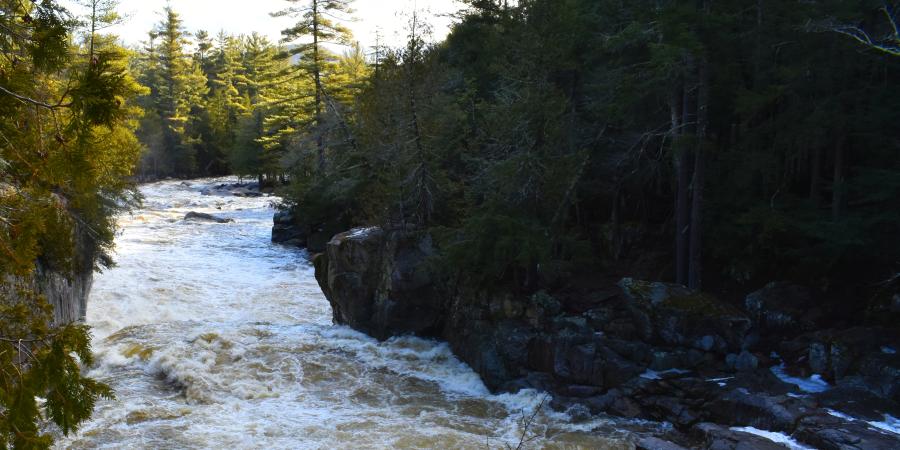 Monday, April 11, 8:35 EDT. April 2022 was off to a rainy start. Following a steady spring downpour on April 7th and 8th, I measured around 1.8 inches on the rain gauge at my house in Peru, NY. We typically measure depth of rainfall in inches, but what was the volume of water brought to us by the storm? If we take the depth of rain and multiply by the area of a watershed, we can estimate the volume of water that fell across the landscape that drains toward a particular river. For simplicity, let's assume that the 1.8 inches of rain was uniform over the entire watershed. Given that this storm was a steady, soaking rain over a widespread area, this is probably a fair assumption to make. The area of the East Branch Ausable River watershed at the USGS gaging station in Au Sable Forks is 198 square miles. That means that around 6.2 billion gallons of water fell on the ground, just within the East Branch watershed. Where does all of that water go? 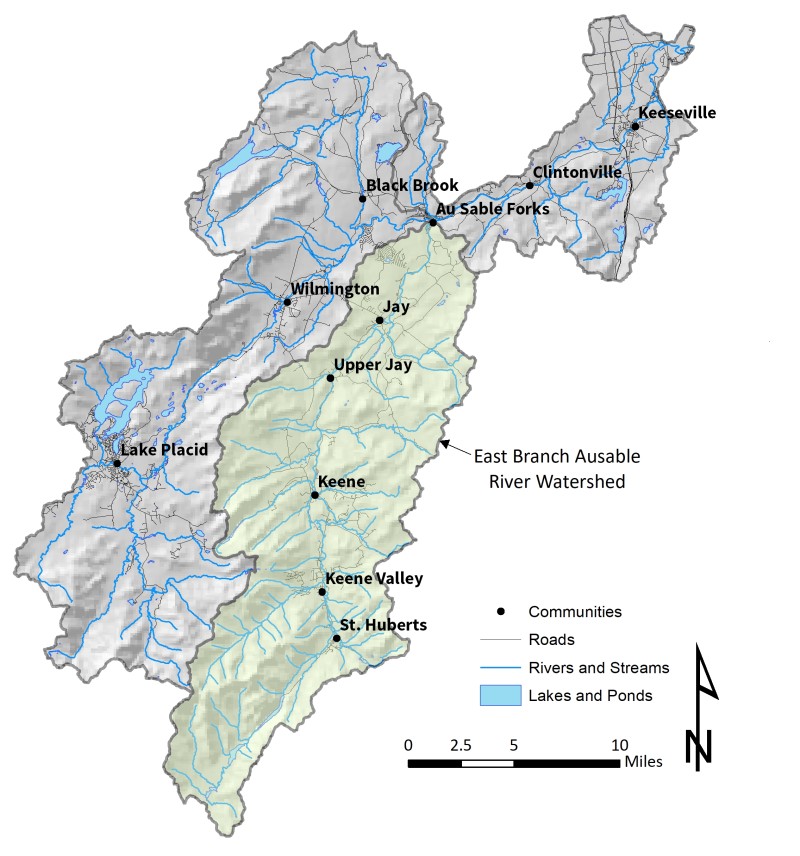 The East Branch Ausable River watershed (shaded in green) has an area of 198 square miles at the USGS gaging station in Au Sable Forks, NY.

Prior to the storm event, the gaging station on the East Branch Ausable River recorded a mean daily flow (MDF) of 273 cubic feet per second (cfs). This is the average flow for the entire day, and it means that, on average, 273 cubic feet (or 2,040 gallons) of water flowed past the gage every second of the day. There are 86,400 seconds in a 24-hour day. If we multiply 273 cubic feet by 86,400 seconds, we find that around 24 million cubic feet (176 million gallons) were already coming downstream on the day before the storm.

Although the storm started early on the morning of April 7th, the East Branch did not reach peak flow until 5:45 AM on April 8th. It takes a while for all of that water to make it downstream to the gage. At that point, the East Branch crossed the threshold of what hydrologists call "flood stage." Minor flood stage on the East Branch is when the water in the river reaches a height of 7 feet, as measured at the gaging station. According to gage records, this corresponded to a discharge of 5,690 cfs. The river only exceeded flood stage at the gage for a little over an hour, and water began to recede through the following days.

A hydrograph of the minor flood on April 8, 2022. Flood stage is 7 feet, as measured at the USGS gaging station at Au Sable Forks, NY.

It's also important to note that not all of this water was storm runoff. That 6.2 billion gallons of rainwater that dropped on the watershed was falling on top of snow in the mountains that was already melting due to above-freezing temperatures. Luckily, much of the winter's snow had melted away in the preceding mild spring weather, or the flooding would have been much worse.

The huge volumes of water that fall during the spring are essential to sustaining the river's discharge through the drier months of summer. Although the amount can vary in an individual storm, hydrologists estimate that around one-third of the water that falls as precipitation is absorbed by the ground and slowly released back to the river as baseflow. April showers bring more than just May flowers. They bring critical reserves of water that support the life cycles of the flora and fauna in our watershed. They also help ensure that our favorite East Branch swimming holes are there when we need them on a hot day in July.